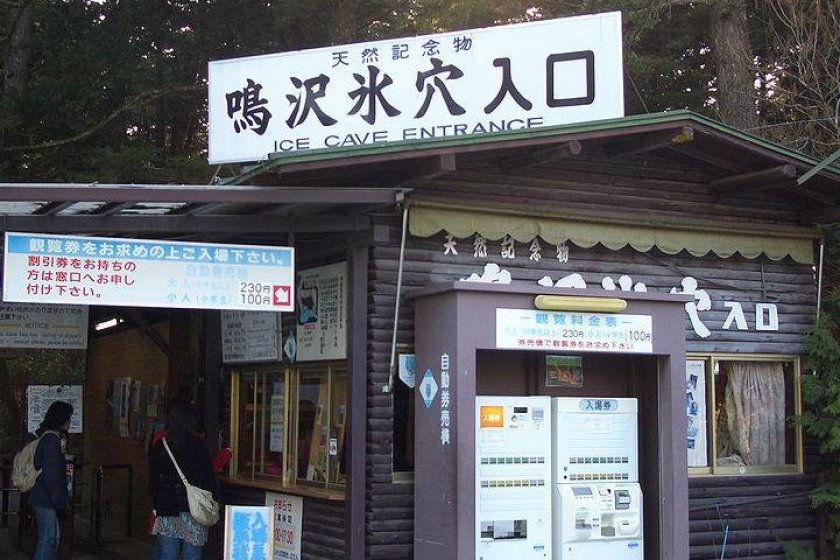 Know your ice from a hole in the ground

You've got to know your ice from a hole in the ground.....especially if the ice in the hole was once sent to government officials at the Edo Castle during the Edo period (1603-1867). The hole in this instance is actually a 21 meter deep cave near Mount Fuji known as the Narusawa Ice Cave.

We visited the Ice Cave during mid-autumn, but it's a good trip any time of the year. We also went to nearby Wind Cave, and took a drive around Lake Sai (Saiko).

The temperature in the cave on the day we were there was 0C (32F). That's enough to preserve a little of the ice that builds up in the cave over the winter months, but I expect it will be more interesting when the dripping water builds up the ice pillars that grow to 3 feet or more in height during the colder months.

Entering the cave requires a bit of caution as the steps are wet and slippery, but there are thick bamboo handrails to hold on to so it's not a problem for most people. In fact, many of the kids who came out of the cave were begging their parents to let them go in again. There is one part that requires a low duck-walk and be careful of your head as the ceiling is low in a few places (ouch! personal experience). It's actually a pretty small cave and the walk through it can be done in about 10 minutes.

The ice cave (Hyouketsu in Japanese) was formed in the year 864 when Mt. Nagaoyama erupted. As the lava cooled the cave was carved out by hot gasses and molten lava flowing out. In the winter the underground water freezes creating the ice pillars that sometimes connect the ceiling and floor. These pillars usually grow from February to March and the nature guide for the area says the best month to see them is in April. On the day we visited, even after an especially hot summer in Japan, there was still a bit of ice in the cave.

Entrance to the cave costs 280 yen for adults (130 for children), but you can buy a 500 yen ticket that also includes entrance to the Fugaku Wind Cave (Lava Cave). Having bought the multi-ticket we left the ice cave and drove a couple of minutes down the road to the Wind Cave (on the Japanese website it is also called "Lava Cave"). You can also walk through the forest from the Ice Cave to the Wind Cave (about 15-20 minutes).

The trail from the parking lot to the Wind Cave is a 2 or 3 minute walk, but take time to have a look at the tree roots to see how tenacious these trees were to have grown in the magma from the lava flow. The roots grow along the magma and seek all the crevices to establish their hold on the rocks.

This cave is a bit longer and about halfway through the cave you'll come to the ice pond. When we visited there was only a tiny bit of ice in the pond, but I expect it will be like a mini skating rink come winter. Just past the ice pond are racks holding cans full of acorns and other seeds. The cave was used to store these seeds for periods of 2 years or more. There are also cans of silkworm cocoons, which were kept in the cool cave to keep the silkworms from maturing into moths, thus producing silk for a longer time.

Leaving the caves we headed down Route #710 for Saiko (Lake Sai). This is a small lake, but on the day we were there the lake was dotted with small boats full of people fishing. The trees were just beginning to wear their autumn outfits and in autumn the sides of the mountains surrounding the lake should be bursting with fall colors. Driving past the lake we made a short stop at the bird sanctuary, but we left that for another day since we weren't prepared for the longer hike necessary to see the park and birds. Continuing along the north shore of the lake we came to Cafe M (Editor: moved to Kofu, Yamanashi), which I definitely recommend for a lunch stop. Sitting out on their open deck, with a view of the lake and some nicely colored momiji (Japanese maple) trees beside the deck, we enjoyed the warm fall day as well as Cafe M's great food. I had their homemade Chinese style pork sandwich in pita bread while my wife had their salmon cream sauce pasta. Both were excellent and I suspect their homemade desserts would be just as good, but the portions were generous and we were full enough - another thing for "next time." The ladies at the next table were enjoying the homemade (see a trend here?) ginger ale. I missed that on the menu so that's also for next time.

Departing Saiko we headed for Kawaguchiko (Lake Kawaguchi). With the maple trees in full autumn splendor, and hundreds of people walking the sidewalks and crossing the road, the traffic around this lake inched along, but given the beauty of the trees we enjoyed the (very slow) ride. From Kawaguchiko you can return to Tokyo or do as we did and make your way to another of the 5 lakes, Lake Yamanaka, and from there drive back to Tokyo via the backroads through Doshimura and either go past Lake Sagami and catch the Chuo Expressway back to Tokyo; or avoid the Sunday expressway traffic and follow the regular highways back to Tokyo.

If you're not driving take the JR Chuo Line to Otsuki Station (one hour by limited express from Shinjuku). Change to the Fujikyuko Line and go to Kawaguchiko Station (55 minutes) then take a bus to the cave (25 minutes). 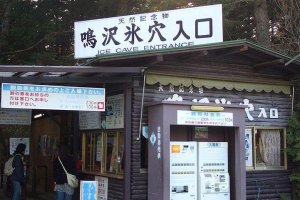 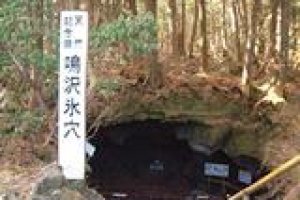 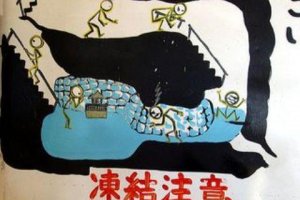