A charming museum and garden out in the hills of Izu

Up in the hills north of central Mishima, there's an attractive little cluster of museums, restaurants and shops, collectively known as the Clematis Garden. The garden itself shares space with the Vangi Sculpture Garden Museum, named for Giuliano Vangi, an award-winning Italian sculptor whose work is displayed all across Italy. His work is very interesting and easy on the eye, and the garden is a beautiful space in and of itself, so you don't have to be a sculpture buff to enjoy a visit here.

At the approach to the ticket booth I looked up to see a wolf at the top of a high pole, scanning the terrain for prey (or customers). The next thing I saw was a huge mosaic of a man and woman on a long, warm beach, a relaxing image that sets the tone for the garden and museum beyond.

After I went round the mosaic, I found myself at the top of a slope looking down on a peaceful vista; a path wound past some sculptures down the slope, leading towards a spacious plaza, framed by trees on each side and hills in the background. I followed the path down and round, admiring the artworks as I went: a hefty abstract piece, a man walking dumb-faced through a forest of metal poles, flowers underfoot.

The plaza at the end gave me a neat view down over the garden, and was home to a handful more sculptures, some of them enjoyably playful. At the end there's a man scrambling clumsily over a wall, like a cartoon character desperately fleeing a ravening dog; by the museum building there's a man pressing himself up against the glass, looking out at us as we look in at him.

I went into the building from the plaza, then down the steps past a sculpted woman in a long coat, and onwards to the main exhibition rooms. Two were given over to a special exhibition by a Japanese artist called Kishio Suga, who had filled the spaces with roughly cut timber and ropes stretched from a metal framework, creating interesting geometrical patterns that changed as I walked in and around them. The other rooms contained more of Vangi's sculptures, given soft light and plenty of space to create a restful atmosphere: a man in a vivid violet robe, a face peering out from a tube, two disembodied heads locked in a kiss.

I went out then into the main garden, pleasantly landscaped with gentle slopes and plenty of greenery. There were more sculptures dotted around here, among them a man looking out from on top of the museum building, as well as an attractive reflecting pond, and a flower grove with a cafe that I assume will be open in summer. It's an enjoyable place to stroll around slowly, and there are chairs and benches that will be nice to sit and relax on while taking in the scenery, when I go back on a less windy day.

While you're there, there are the other three museums to enjoy, as well as a restaurant and cafe, and shops selling gifts, flowers and books. There's plenty of parking or, if you don't have your own transportation, a free shuttle bus runs regularly throughout the day from stand 3 at the north exit of Mishima station. However you choose to come here, it definitely merits a visit. 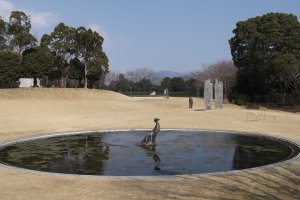 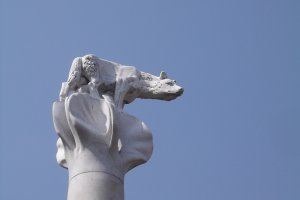 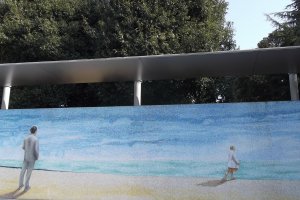 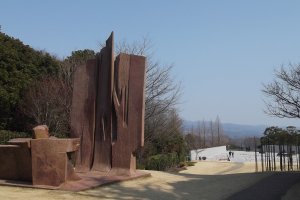 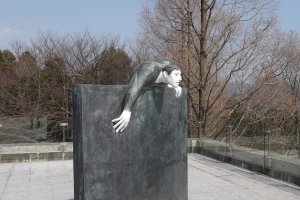 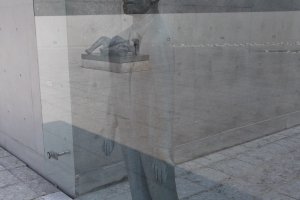