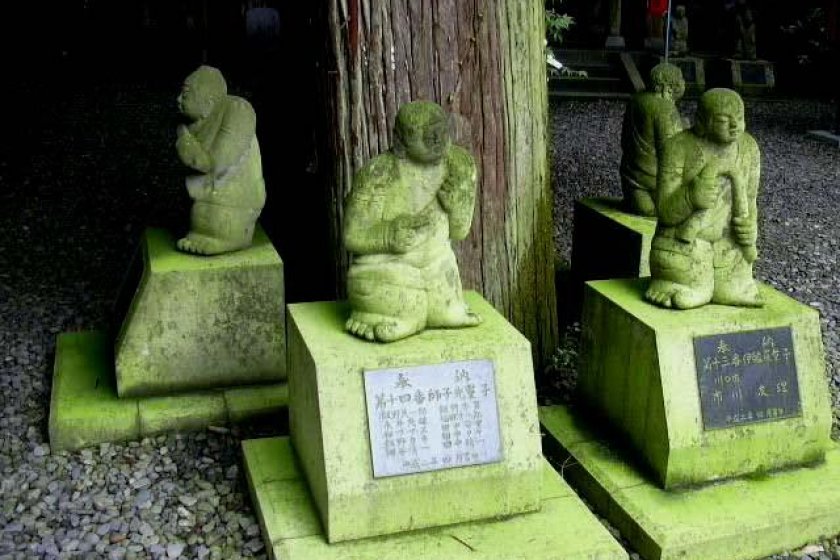 A spooky, mystical temple on a wooded mountainside

Under a cedar tree, at the top of the temple stairs (Photo: S. C. Kurokawa)

If you come to Utsunomiya, you ought to go sightseeing in nearby Ohya and if you get that far, you ought to check out Tagefudousan https://tagesan.com/. This dark, somewhat spooky mountainside temple, sheltered by tall trees, houses many childlike jizo statues.

Jizo is the protector of infants or fetuses that have died. Each jizo statue wears a red hat and shawl. At least a hundred of them shoulder to shoulder are quite a sight. In front of them are offerings such as stuffed animals, character cups, and pencil crayons. Besides the jizo, many other stone human figures can be found under the trees, green with age and moss.

I don’t speak Japanese well, but I saw the kanji for entrance around the side of the temple. I asked the lady selling charms if I could enter. She told me there was a lucky figure (omamori) under the building. I made my way through a space under the building to find a stone figure and offering box. The lady directed me to another special stone figure inside the temple. What a treat to take off ones shoes and step across the temple tatami mats past ornate gold where usually only the priest treads. At the back of the room, I found an eerily lit stone figure of a man with a wrinkled face. The lady came to make sure I was in the right place. She showed me an ornate closet which houses yet another figure and is only shown to the public on September 1st of each year.

I visited on a rainy Sunday afternoon in October, just before the trees turned golden and red. A few weeks later, a walk in the area would be spectacular. In June too, it would be nice to see the hydrangeas blooming along the approach to the temple. Mid-May would be worthwhile, if you could time your visit to coincide with the annual fire walking ceremony held by this temple.

If you come by bicycle (not far from Shinrinkoen where the Japan Cup is held), you'll want more than three gears and good brakes as the temple is on a mountainside. You know you are on the right road if you have to pass through a red temple gate at the foot of the mountain, about 20 minutes by bicycle or 10 by car from Ohya Heiwa Kannon (peace statue).

As I left, somebody on the temple grounds starting blowing on what sounded like a conch shell. It's a rather haunting temple indeed. 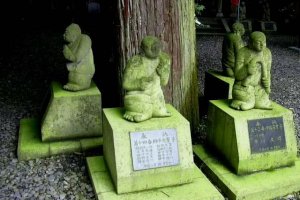 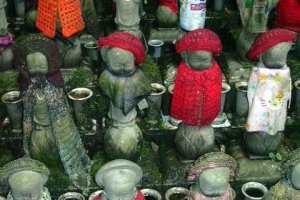 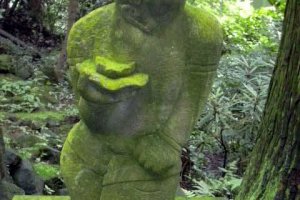 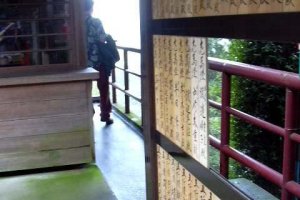 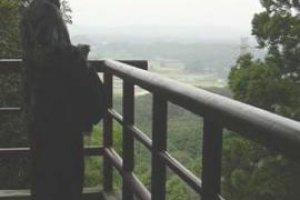 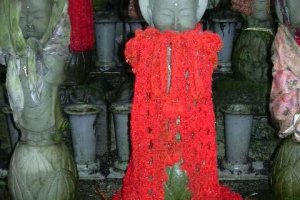