Naruto Whirlpools From the Bridge

A corridor with windows 45 meters above the sea

The Naruto Whirlpools are often referred to as 'eddys' in Japan, but the word 'eddy' makes me think of gentle, playful swirls of water in a river, not the impressive phenomenon that I viewed at Naruto. Due to tidal differences, the Seto Inland Sea and the Pacific Ocean can differ as much as 1.5 meters in height. They both flow into Naruto Strait from either side and the resulting clash of the strong currents creates powerful surges and whirlpools up to 20 meters across.

The Ō-Naruto Bridge is a suspension bridge spanning the Naruto Straight between Minami-Awaji Awaji Island and Ōge Island in Naruto, Tokushima. The bridge opened in 1985, and is 1,629 meters long. It connects Shikoku to Honshu via a motorway over Awaji Island and the Akashi Kaikyo Bridge.

The Ōge Island end of the bridge has a very special feature. A 450 meter long corridor named Uzu-no-michi has been constructed in the support girders under the bridge to allow people to walk right out over the ocean and view the Naruto Whirlpools. The corridor has glass windows all the way along, with four viewing spaces where the glass extends from the floor to the ceiling, and floor windows at intervals. At the end of the corridor there is a spacious observation gallery where you can enjoy 360 degree views of the Strait. The observation gallery also has large floor windows so you can look straight down at the swirling ocean 45 meters below. The views of the sea and islands are fantastic, even apart from the whirlpools. I also really enjoyed watching the boats that bring tourists to cruise around the pools.

There are free audio guides explaining about the whirlpools and the bridge available in Japanese, English, Chinese, and Korean. They also have a theater showing movies of impressive spring tide whirlpools, a simulation vehicle named Uzu-maru that simulates views of the whirlpools from underwater and of the straits from the sky above, a fishing game, a mini aquarium and more.

The best times of day are mid-tides (twice a day). You probably don't carry a tide table around with you, but if you want to check before you go, visit the Uzu-no-Michi website to see the best time to view the whirlpools on the day you visit (in Japanese, English, Korean or Chinese). Sometimes the currents flow more strongly than others, increasing the likelihood of whirlpools forming, and you can find that information on the website too. The best time of year is spring.

Find out more about Naruto Whirlpools. 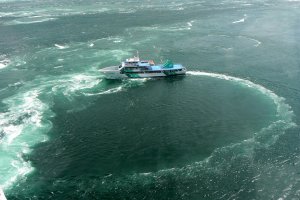 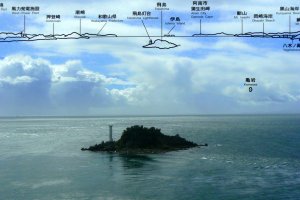 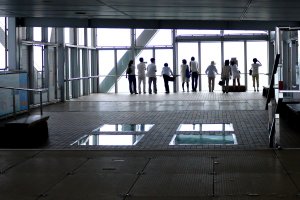 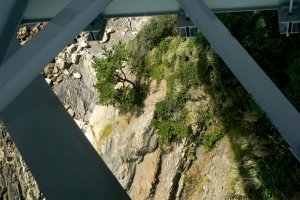 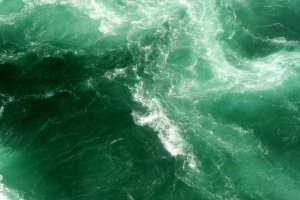 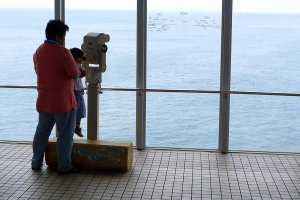