A Stroll Down Shitamachi

If you have seen enough of Asakusa, and are beginning to get a little weary of the swarm of people near the temple, it may be time for a stroll along the Sumida River. Just a few minutes away from Asakusa Station you will find a neatly paved path along the river. While enjoying the cool breeze, perhaps with a bottle of ramune (a traditional Japanese soda you can find in Asakusa) to replenish you, you can take in a great view of Tokyo Skytree along the road.

The latest addition to the Tokyo skyline, Skytree is the tallest broadcasting tower not only in Japan, but also in the world. As for the structure itself, the 2,080 ft tower boasts its title as the second place winner of the tallest building in the world record after the Burj Khalifa in Dubai. The view of Skytree from the walking path along Sumida River reveals an interesting contrast between the modern tower and the neighborhood where it sits.

Both Asakusa and Oshiage (where Skytree is located) are historically known as Shitamachi (下町) or "low city". Geographically, Shitamachi tend to be parts with a lower elevation near the ocean or the river - the Sumida River in the case of Asakusa and Oshiage. The term Shitamachi comes from its location vis-à-vis the central parts of the city, which historically revolved around the castle. Samurai, as well as aristocrats, lived on a higher ground known as Yamanote (山の手) "towards the mountain", while merchants lived in the lower Shitamachi.

It is perhaps no surprise that Asakusa is still home to traditional merchant stores. It is upon such Shitamachi with resonance of local tradition that the brand new Skytree was built. Like many other places in Tokyo, the past still lives on amidst the growing edifices that paint the new face of the world’s leading metropolis. So for a refreshing stroll as well as a great view of Skytree, juxtaposed against the traditional Shitamachi, head to the path along Sumida River. 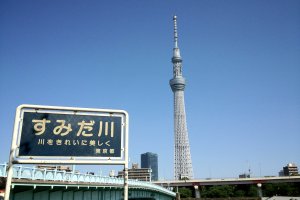 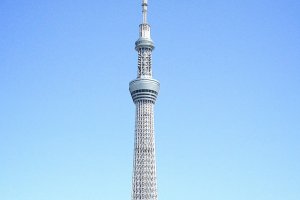 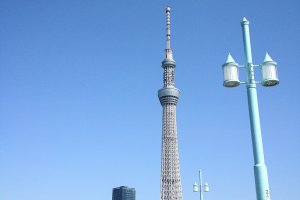