A Shinto shrine by the Sumida River

Sitting on the east bank of Sumida River by the Kototoi Bridge, this old Shinto shrine's nomenclature refers to the healing power of the ox. Unlike other shrines that feature a fox or a lion as guardians, Ushijima Shrine features an ox. Ushi means ox in English and it is said that offering prayers at the shrine and rubbing its nade-ushi ox statue will go a long way to curing whatever it is that is ailing you...

Relatively unknown, at least for visitors, Ushijima Shrine managed to miraculously survive the Great Kanto Earthquake in 1923 as well as the Tokyo fire bombings of World War Two. The shrine is said to have been established way back in the mid 9th century and built originally to enshrine a single deity, though the current complex now enshrines another two in its Honden building. Prayers are offered at the Haiden structure after passing through two torii gates. The first torii gate is a stone and perhaps unremarkable but the second torii is much more distinctive. A rare wooden miwa torii - a central torii gate connected to and flanked by two smaller torii - the second torii is a decidedly regal and stately one.

On the left of the main building lies the Kaguraden, a music 'stage' where musicians ply their talents during the Grand Festival held every five years in September. During this festival, a somewhat rare black ox carriage is drawn through the grounds while portable shrines from around the neighbourhood are paraded onto the shrine grounds on the last day of the festival.

Another local gem in Tokyo, Ushijima Shrine represents history, culture and, with its rubbing ox, some good fortune too.

Take the Asakusa Line to Honjo Azumabashi Station or the Tobu Skytree Line to Tokyo Skytree Station for an 8-minute walk. Otherwise, it's a 10-minute walk from Asakusa Station on the Ginza or Toei Asakusa Lines. 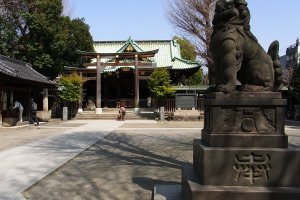 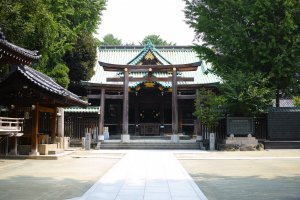 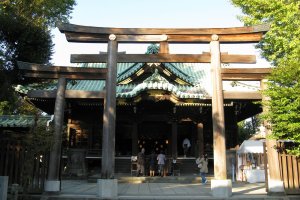 Elizabeth S 2 years ago
What an elegant torii gate. An easy side trip from Skytree or Asakusa.

Sleiman Azizi Author 2 years ago
Lots of easy side trips in this area. Highly recommend it too. You never know what you can find.
Reply

Sleiman Azizi Author 2 years ago
Yup. Myself, I'm a fan of the miwa torii.
Reply
4 comments in total