Famous for its underground water reserves, Akishima City is a lovely example of modern relaxed Tokyo. A curious history of ancient sea creature fossils, natural rivers, and international artworks help identify the city as more than just suburban Tokyo. Here is a simple introduction to some of the history and landmarks to be found in Akishima City and how to reach them.

In 1961, a complete fossilised skeleton of a kujira whale was unearthed in the Tama River. Since then, the city has made the whale the official character of the city. Scores of whale-themed spots can be found throughout the city including the Kujira Shopping Street, the Hajima High School Whale Mural and plenty of Japan's famous manhole covers decorated with whale themes.

The shopping street is a 2-minute walk from Higashi-Nakagami Station on the JR Ome Line.

A part of the city-straddling Showa Kinen Park, the Gingko Tree Avenue is another example of Japan's love affair with this beautiful tree. Come autumn, the leaves of the gingko lining the 414m-avenue provide its visitors with a stunning backdrop of beautifully vibrant yellow. Plenty of options outside make the avenue a popular destination.

A 10-minute walk from Higashi-Nakagami Station on the JR Ome Line.

Haijima Station Stained Glass Mural is a public art work by the late Belgian artist, Lousi Fransen. Situated within the concourse of Haijima Station, it was was completed in 2007. Titled 'Riding the Dream that Blows Across Beautiful Flowing Water', this stained glass work features the Tama River, the city's famous whale and plenty of natural light.

Direct access within Haijima Station on the JR Ome Line.

With natural water being one of the city's major stars, the famous Tama River is an obvious natural landmark that draws plenty of visitors. Flowing along the city's southern and south-western borders, the river affords its guests with plenty of relaxing walking trails to help take in the open atmosphere.

A 10-minute taxi or a 30-minute walk from Akishima Station on the JR Ome Line. 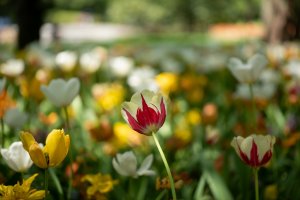 Elena Lisina 2 weeks ago
And in the article it's 'gingko' :)))
Reply
3 comments in total
Back to Contents