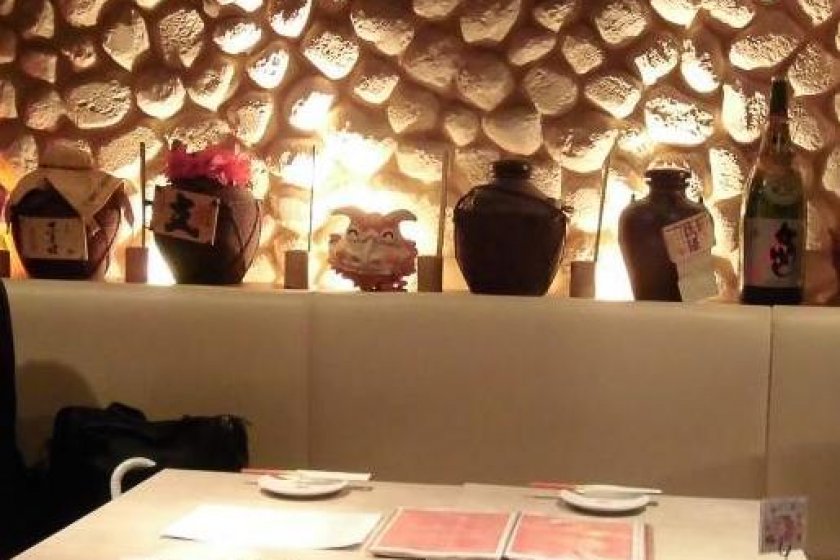 Okinawan food in the heart of Shibuya

When the strain of day-to-day life in any of the sprawling metropolises that make up Japan gets too much, many are the city-dwellers that take advantage of vacation time to jet off for a stay in the topical bliss of the Ryukyu Islands, situated off the Southern point of Japan between Japan and Taiwan, the largest and most famous of which is Okinawa. However, for those without the time or money for such a jaunt, then a taste (quite literally) of Okinawa can be had in Shibuya’s Ashibina.

Located in a basement of a building just a stone’s throw from Shibuya station’s Hatchiko exit, Ashibina quickly ushers you into an intimate atmosphere and a quick glance around reveals that, despite being quite small, the restaurant is composed of a fair-sized bar, a small café-like area for a more relaxed air, as well as the restaurant dining area proper. There are two menus: a recommended menu and a main menu. The first is only in Japanese so either a fair degree language ability is required or the ol’ eyes-closed-and-randomly-point technique will most likely be employed. The second, however, has pictures so a more informed choice can be had by those lacking the language.

Being a new-comer to Okinawan food I went for my guide’s recommendations of typical dishes, the most famous of which is probably goya champuru, the main ingredient of which is an astoundingly bitter vegetable which by itself was hard to eat but went down quite well with the accompanying ingredients of tofu, sliced chicken, and bean sprouts. In addition to this we ordered rafute, thick cuts of pork cooked in a mild sauce, which just falls apart sublimely in the mouth, a delicious tempura-esque dish called kaki-age, and the famous Okinawan soba, soki soba. Oh, and not forgetting the slightly less than traditional choice of chilli fries! Each dish managed to simultaneously stimulate multiple senses: smelling, looking, and of course tasting fantastic and for a price range of between ¥500 and ¥700 per dish it is certainly value for money. For two people the five dishes we ordered was about sufficient, but if…neigh, when(!) I go again, I think seven dishes would sate completely.

Drinks-wise, true to its Okinawan roots a wide range of Awamori (Okinawan alcohol closer to Shochu than Sake) is served, a couple of which before, during, and after the meal is enough to combine effectively with the cozy atmosphere into a glow of merriment befitting the famously relaxed Okinawa style…and for a culture world-renowned for its longevity, why not indeed?

I am originally from Birmingham England and have always sought places over the horizon. I first moved to London from my home town where I studied Literature and my interest in Asia first bloomed through exposure to Hong Kong, Thai, and Japanese cinema. I spent a year in China prior to the Olympics teaching English and then returned to London in 2008 where my interest in Asia focused on Japan for what I saw as its vibrant and creative culture as expressed through cinema, literature, music, and art. I am currently living in Tokyo. 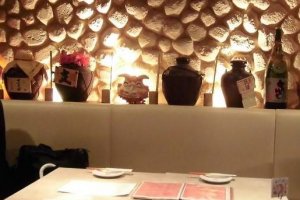 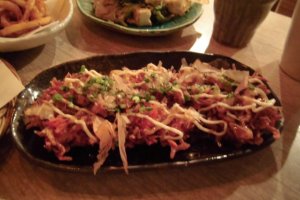 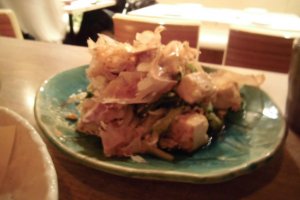 Turi Zsofia 5 years ago
Enjoyed your post. I have been to Okinawa for 2 weeks. The food especially the taco-rice and the Awamori were so tasty!!!
Reply Show all 0 replies
1 comment in total