Each May, the artistry of the geisha, and of Japan itself, is beautifully presented at Ginza's Shinbashi Enbujo Theater. In 1925, just a few blocks from the legendary Kabukiza Theater, the understated and intimate Shinbashi Enbujo was built to propagate the long-refined geisha culture. Azuma Odori, the theater's popular premier show, has continued annually since. Beautiful, nature-inspired stage sets coupled with modern lighting and staging theatrics make the presentation of an old, history-rich art form sophisticated and engaging.

This year's Azuma Odori highlighted dance, music, and drama. White-faced, kimono-clad geisha danced center stage while their older counterparts provided vocal and three-stringed shamisen accompaniment. Dance movements were mostly slow and elegant, with much care taken to step gracefully within overflowing kimono fabric. Oil paper umbrellas, or wagasa, were the most common dance props, the variety of which could comprise their own art genre: janomegasa and sangaigasa, with bull's eye designs and three-tiered circles, were particularly showy versions with their patterned and synchronized presentation.

With myriad dance scenes and plotted skits, the show's two thirty-minute acts flowed quickly. Only rarely did the acting and dancing geisha sing or speak, relying mostly on their intricate and purposeful stage movements. Some dances and stories from previous years' shows were re-invented, while others, along with the accompanying music, saw their debut. To an American accustomed to Western-style music, the sounds of the wavering singing, shamisen, and occasional off-stage flute and drum constituted a dissonant, eerie sound. The bright, nature-inspired sets, however, presented a contrasting feeling of warmth, peace, and beauty. Many dances focused on flowers and seasons, like chrysanthemums in autumn and spring cherry blossoms. Another scene contained a full-scale bridge and projection-generated waterfall. Traditional Japanese icons like Mt Fuji were represented, and even ukiyo-e art (wood block printing) served as a muse; Under the Wave off Kanagawa, by Katsushika Hokusai, provided set decoration for the representation of summer, while the wintery scene in Suzuki Harunobu's Lovers Walking in the Snow inspired a lovely couple's dance.

Pre-show and intermission at Azuma Odori are also authentic experiences with vendors offering high-end bento, sake in a box-shaped drinking cup (masu), and traditional sweets. Food and drink can even be enjoyed in the theater during the performance, but bento may have to be reserved in advance. Two geisha also perform the unique and complex tea ceremony during intermission, serving guests for a worthwhile wait (and possible extra charge). Taking pictures of the geisha at that time is completely acceptable.

As geisha are famously elusive and normally exclusive to rarified clientele, don't miss this unique opportunity to see them at their artistic best. An extended, late-May weekend with multiple performances per day encompassed this year's Azuma Odori, but visit Ticket Web Shochiku early next spring to book next year's tickets.

I'm a military spouse and mother of two small kids, having the time (and challenge!) of my life exploring Tokyo. 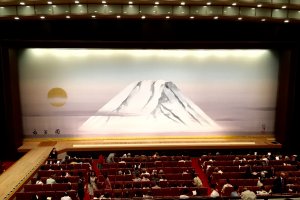 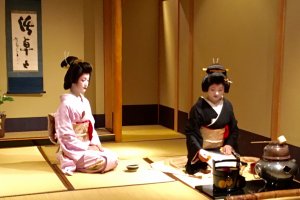 Elena Lisina 4 years ago
Thanks! Is it simular to Miyako Odori performance in Kyoto?
Reply Show all 0 replies
1 comment in total