When I told some Japanese friends that I was going to be staying around Jimbocho one time, more than one recommended that I go to "The Sumatra curry restaurant". A quick search told me that it was called Kyoeido so, being a fan of Indonesian food, I duly went there for my lunch one day, keen to give it a try and see what all the fuss was about.

The interior is simple but cosy, with comfortable cushions, prints on the walls, what looks like a little shrine in one corner, and a soundtrack of jazz standards and oldies such as The Beatles. I was there at lunchtime on a weekday, and I was glad I got there early, because by 12:15 it was absolutely packed with staff from nearby offices and shoppers fresh from the area's many second-hand and specialty bookstores, making for a lively, convivial atmosphere. Literally convivial: I was at a table by myself, so was asked to share at times with other customers, one of whom wolfed down his curry in ten minutes flat. His boss must be a proper slave-driver.

My pork curry arrived quickly, a goodly amount of sauce and tender meat in a large serving-boat, with a plate of rice and a little cup of soup on the side. It didn't include any vegetables, so I helped myself liberally to red pickles and little onions from the jars on the table. Not having been to Sumatra, I can't vouch for how authentic the curry is, but it's certainly different from Japanese curry. Darker, thinner, spicier and more fragrant, it's also distinct from Indian and Thai styles of curry, satisfyingly hot with a pleasant, lingering aftertaste.

They specialize in just the one thing so the menu, which has English alongside the Japanese, is pretty limited. The Sumatran curry comes with pork for ¥950, chicken for ¥1150, prawn or beef for ¥1350 each, or tongue for ¥1700. For an extra ¥2-300 you can have extra curry, or extra rice for ¥50 or ¥100; what I had was plenty big enough for me, and a tablemate who ordered the smaller size of extra rice got a very big mound indeed, so be warned. There's a small selection of salads, beer or stout for between ¥370 and ¥530, a seasonal baked apple also for ¥530, and that's it! 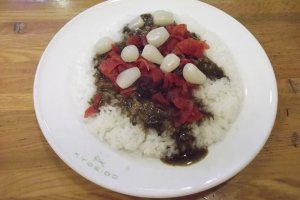 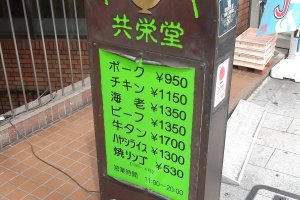 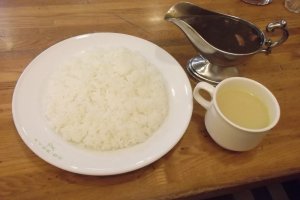 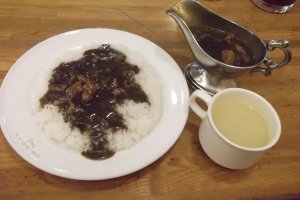 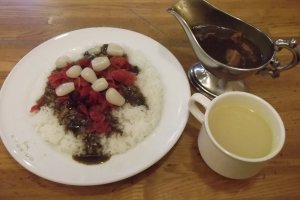 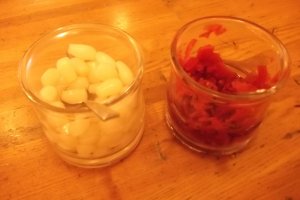 Victoria Vlisides 5 years ago
It may be strange, but I love all the extras you get with the curry. The pickles and onions look so delicious.
Reply Show all 1 replies

Peter Sidell Author 5 years ago
I guess I'm strange too! They do add nicely to the taste.
Reply
2 comments in total