The Eco Edo Art Aquarium is an ultra-modern exhibition that forces us to reconsider our traditional concepts of "art." Since becoming an annual summer event in Tokyo, the exhibit has become a must-see for people of all ages and interests. It has a little something for everyone.

What exactly is the Eco Edo Art Aquarium? That's a difficult question - it's a bit hard to define simply.

It's one part living, biological art display. Producer Hidetomo Kimura pairs thousands of live goldfish with modern, avante-garde fish tank design to create an exhibition that truly puts a new spin on a simple premise: the everyday pet goldfish in a round bowl. Kimura's aquariums are a thing of wild imagination: with nontraditional shapes and dramatic lighting, the tanks are filled with optical illusions and unique perspectives. One aquarium appears to be slanted downward - from all four sides. Another makes the fish seem huge and tiny, depending on the angle. Others are more simple containers, designed to accentuate the incredible, beautiful fish inside. The variation and beauty of the fish here are wonderful.

It's another part tribute to the traditions of Japan. The decorative theme throughout the exhibition was "traditional Japan," and the themes were expertly woven in and out of the area. At one particularly intriguing display, a series of vertical panels (aquariums, of course - fish were swimming right through the middle) were lit up with an amazing light display, showing imagery representing the changing of seasons throughout the year, and their associated themes in Japanese culture.

The event is another part nighttime hotspot. How many museums have you been to that sell beer and liquor? Yet they can be purchased readily at the Eco Edo Art Museum, and most people were walking around with a drink in-hand.

It's a final part concert-hall and dance club. Come on weekend nights for live music gigs. The night I visited featured a DJ playing bass-thumping club music that got the young-ish crowd dancing, making the beautiful fish and artistic aquariums vague backdrops to a fun Saturday night. The DJ gave way to a funky boss a-nova/swing band that brought the house down with some catchy music and powerful performances.

The exhibition was open from 11am-11:30pm, with the morning and afternoon times with a much more sophisticated atmosphere than the wild events on weekend nights. It has run from mid-July to late-September in recent years, although exact dates and times are sure to change from year to year.

The Eco Edo Art Aquarium is located on the fifth floor (the Nihonbashi Mitsui Hall) of the Coredo Muromachi Building (although on busy days, people without advanced tickets will be sent to the basement floor of the building to get a ticket voucher before going to to fifth floor for the exhibit). The building can be accessed from Exit A6 of Mitsukoshimae Station (Tokyo Metro Ginza Line). 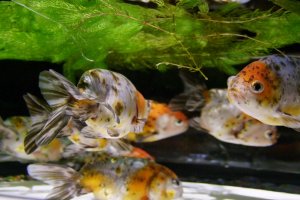 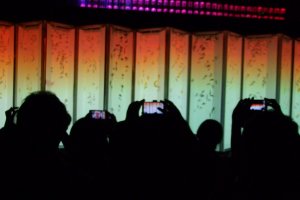 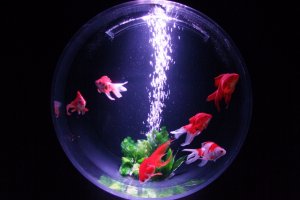 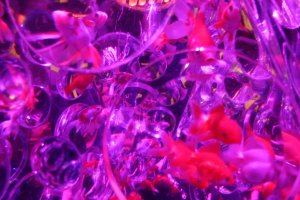 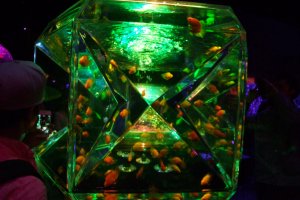 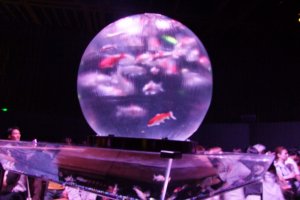 Hal Halverton 7 years ago
I went last year and had a great time. Highly recommended to go with a group of friends or a date night! Mojitos and beer!
Reply Show all 0 replies

JapanTravel Guest 7 years ago
Really good article and pictures, I enjoyed reading that, as you say there are some real avante-garde displays there. Pretty cool that they sell beer there too ! Vey interesting and different place
Reply Show all 0 replies
2 comments in total