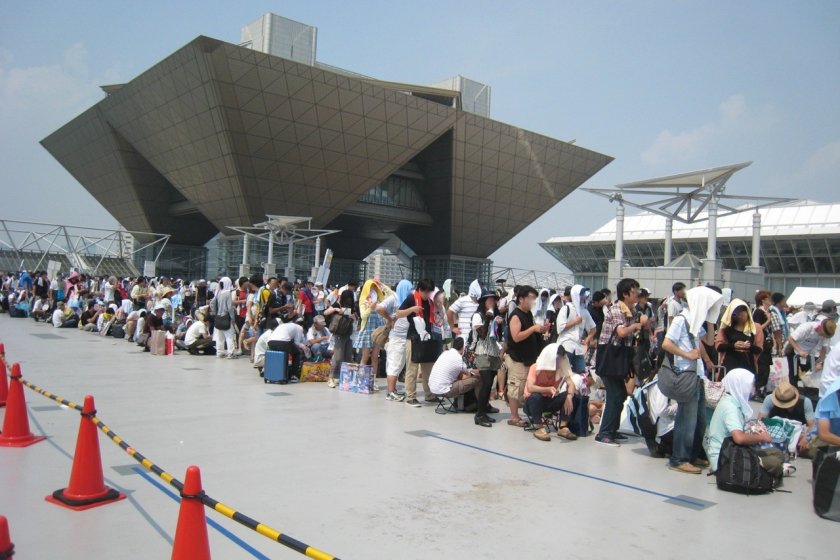 An FAQ-guide to attending the Comic Market in Tokyo

Comiket is short for Comic Market, the largest biannual event for lovers of the Japanese anime, manga, and game subculture. The event is held at Tokyo Big Sight once in summer and once in winter, over three days each time. Starting first as a small-scale event for the sale of fan-fiction and fan-art, it has evolved to be a large-scale event, with participation of cosplayers and commercial booths. Nevertheless, the mainstay spirit of Comiket is still in its representation of all things fan-made, the one great event where fans can socialize with those sharing their interests, and celebrate all that they love.

Should I go to Comiket?

If the previous section wasn’t necessary for you, and you know very well the glorious manifestations of all things ‘moe’, then please do skip and go on to the subsequent sections.

If you are an innocent bystander, and would like to get a glimpse into the peculiar and feisty Japanese subculture, then here’s what you should keep in mind in deciding whether to attend or not – over half a million people attend over the three days, so it gets really crowded. As it is Japan, the crowd automatically resolves itself into orderly but monstrous queues, even for toilets. Nevertheless, if you’d really like to see what the hype's about, then a good option is to get there slightly past noon when there should be minimal queuing and still sufficient Comiket atmosphere to soak up.

When is Comiket held?

The official website lists the date of upcoming Comiket, and is also a very useful source of information, if you read Japanese. There’s a very brief guide in English on the website listing necessary information.

How do I prepare for Comiket?

Firstly and most importantly, read the available guidelines on how things run in Comiket. This is a massive event, and many rules have grown around it to make it run smoothly for everyone.

I think the anime Genshiken has a good portrayal of what Comiket is like, and is an especially good sample of Comiket etiquette – queuing, purchasing, cosplay photo-taking etc.

Find out how to get there from where you stay, and make preparations according to what you’re planning on doing.

Do I need the Comiket Catalogue beforehand?

Comiket releases a catalogue before each event listing detailed information of participating fan groups and commercial booths, together with participation guides and layout maps. If you are buying fan-works, or doujinshi, a catalogue is quite necessary, so you can draft up a “shopping list” for booths to visit to facilitate moving around in the crowds on the day. Otherwise, the participation guides can be downloaded in the catalogue section of the website (in Japanese).

You can get it in CD form or in paper form from bookshops and anime-related shops (both online and offline) in Japan. The catalogue is also sold onsite during Comiket. The catalogue costs around 2000-2400 yen, but there’s an online version here. Sign-up is required, but it allows free access with pop-up ads. To download or print the data off the net version you’ll need to pay.

What should I bring to Comiket?

It is recommended to come prepared, so it is worth bringing the following when queuing:

For Comiket itself, things you may need:

Which day should I go?

The commercial booths are the same for all three days, but the doujin booths differ. Roughly, day 1 is generic; day 2 is more female-oriented; and day 3 is more male-oriented. This is subjected to changes, so refer to the catalogue for details on which title is allocated to which day. By subjective impression, day 2 has a slight increase in quality of cosplay due to the rise in female participants.

What time should I go?

To get the most popular doujin, take the first train and expect to queue for 5 hours.

To simple browse or cosplay, arriving around 10~11am will allow you to enter after an hour or so of queuing, but very popular titles may run out.

To avoid queuing, arrive around noon, and you can enjoy the atmosphere. Popular titles may sell out but a lot are still selling.

How to get there?

See details in the Info tab (the "i" at the top-left of this page), or check Hyperdia or other navigation tools.

If you go in the morning, along your way you’ll soon meet with the crowd of Comiket attendees who are quite easy to spot--just merge and follow the flow.

What if I’m not in Tokyo?

If you are coming from Kyoto, Osaka or Nagoya and plan to stay only one day, you can take an overnight bus and return on the same bus that evening. Many bus companies such as Willer Express organize Comiket bus tours, with optional add-ons of a visit to a nearby onsen.

You can also reserve a hotel in Tokyo and stay for some sightseeing, but be sure to book early. Hotels in the Odaiba area close to Yurikamome stations are convenient, so are hotels near stations along the JR Saikyo Line, such as Shinjuku, Ikebukuro, Shibuya or Ebisu.

What is the queuing about?

If you go before noon, there’s a gigantic queue to get into the event hall. The Japanese have perfected the art of queuing, so it’s a very orderly affair. There will be facilitators putting everyone in neat formations and moving the queue forward by blocks. If you happen to faint while waiting, there’s a medical team onsite.

Be considerate to others and bring your trash with you until you reach a garbage disposal point. Resist the urge to run and push even if the object of your desire is right in front of your eyes. Do follow instructions (if you don’t understand Japanese, just follow what everyone else is doing) and be nice to the staff, since they are all volunteers (even the medical and security crew).

There are two halls – East and West. West Hall is for commercial booths, so head to the East Hall queue, which has more people, if you want doujinshi. Be prepared for further queuing out in the open if you are heading for limited goods for popular titles in the commercial booth area.

Once inside, there are separate queues for individual doujin circles or commercial booths. Very popular titles are generally located near the wall for the East hall, and there will be some very organised queuing. Sometimes a sign card will be used to indicate end of queues. Take the card from the person in front of you when you get into the line and pass it on to the next person who joins. This system applies also for the toilet if it gets very crowded. (which has separate queues for urinals and stalls).

A golden rule of Comiket is that there's a queue for everything. All that queuing will take your patience up to a level probably never experienced before. You will need to queue to get into halls and to move between halls, you'll be routed into very long round-about queues in complicated one-way systems to ensure smooth traffic in the halls.

What if I want to cosplay at Comiket?

There are separate changing areas for female and male, but no changing cubicles, so if you’re not comfortable stripping in front of people, wear something under. Queue with other participants until you enter, and then follow the directions to get to your changing room. There is a registration charge (800 yen), and you’ll get a booklet & sticker to certify you’ve registered. Show that to the staff to get back into the changing room at the end of the day to change back into your civilian garb.

The changing area is essentially a hall demarcated into zones, and the staff will direct you to openings in the floor-space where you can settle down and get changed. Pack smart so that you won’t take up too much floor space, and bring a big mirror and tissue paper. There are no sinks available, so bring make-up remover wipes, and alcohol wipes for contact lenses. There are no lockers, so you’ll need to keep your bags with you. There will be a charged cloakroom service, but space run out quickly so don't depend on it.

You cannot wear cosplay costumes outside of Comiket, so you must change on-site and return to civilian clothes before leaving. The changing room closes at 5pm, so make sure you return on time.

What should I do if I want to take photo of cosplayers?

You need to ask permission, or simply catch their eyes and make sure they understand you’re taking their photos, even if you like doing candid shots. If they’re posing for a crowd, join in. If there’s a queue of sorts (Japanese observe queuing even when there is no apparent line, so be perceptive), keep count and wait your turn. Don’t monopolize one cosplayer for too long, especially if there are people waiting. You can ask if the cosplayer is willing to do certain poses or shift their location a little, but be polite. Thank them and let them know where you’ll be publishing their photos, even if on your own blog. If you can’t speak Japanese, it’s particularly useful to make some name cards or at least slips of paper with your blog/website/facebook address where the photographs will appear.

What if I'm lost/need help?

A word of advice from the office is to make sure you know your way back to your hotel, in case you get separated from your friends in the crowd.

What if I need the toilet?

Try not to, before noon. I know it's hard to determine the optimal balance of water-intake that will keep you from dehydration but won't make you run to the toilet, but err on the side of caution and don't faint from dehydration.

Toilets are in short supply and there's queues.The person at the end of the queue will have a トイレ (toilet) sign in Japanese (小 is for the urinal queue).

What if I'm hungry/thirsty?

There are various restaurants, cafes and convenience stores, and temporary food vans spaced throughout the halls and surrounding grounds. Prices are not inflated. However, drinks may arrive room-temperature in summer due to high demand.

What if I buy too much to carry?

The major delivery companies in Japan have booths to take deliveries for things you’ve bought in Comiket. They have paper boxes and are very efficient. If you can’t bear to part with your bounty even for a second, then carry it back and be considerate to others on the train.

What can I do after Comiket?

A significant portion of people head to Akihabara or Ikebukuro afterwards, so consider whether you want to see the same crowd again. There’s an onsen in Odaiba if you want to relax, but that’s a popular option too. Alternatively, head home, have dinner, get a good rest and be ready for the next day! 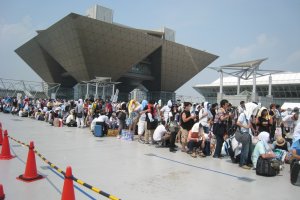 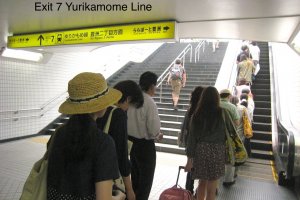 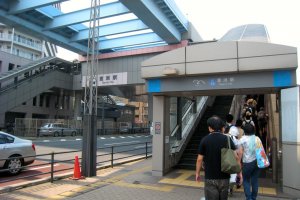 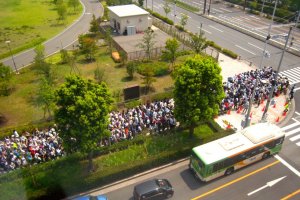 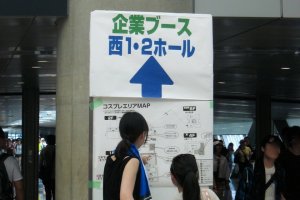 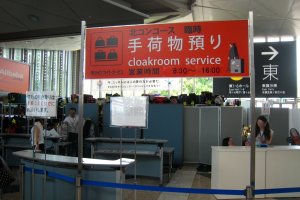