Shinagawa City packs a lot of historical culture within its borders. Its location on the edge of Tokyo Bay saw the city become the first stage of any journey from old Edo to Kyoto while the Buddhist faithful found succour in its many temples and shrines.

One of the most important of these temples is Honsenji Temple, a Shingon Buddhist temple, Honsenji features a number of well-known rituals and ceremonies that make a visit here a useful reminder of just how deep the city's religious and cultural histories are.

Famous for its bronze seated jizo statue, the statue is one of six that were created and placed at the entrances to old Edo back when the city was starting its ascendancy. The statue was cast in the 18th century though the temple itself is said to have been established at the beginning of the 9th century before being rebuilt in the 17th century. Honsenji is consequently Shinagawa's oldest temple.

The temple is also known for its annual joya no kane bell ringing ritual. The temple's giant bell - which for some reason was taken out of the country only to be found in Switzerland before being returned in 1930 - is rung 108 times during the New Years festivities. Buddhist belief suggests that the ringing represents an expunging of the 108 worldly desires said to have accumulated over the previous year.

Another New Year tradition sees the monks of the temple perform the otakiage rite. Here, lucky charms and decorations of the previous year are ceremoniously burnt as an offering to begin the year anew. Fire walking occurs here during the Shukuba Festival in September while a gingko tree by the entrance gate is said to be around 600 years old and has been recognised by the city as a natural treasure.

Replete with religious culture and history, Honsenji Temple makes for a fascinating visit.

Two stops from the JR Shinagawa Station, Honsenji Temple is a 1-minute walk from the East Exit of Aomono-yokocho Station on the Keikyu Line. 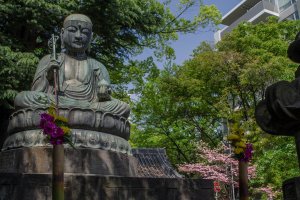 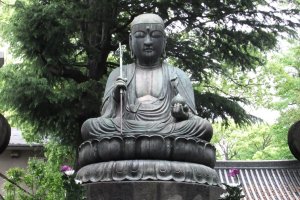 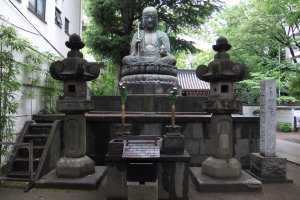 Elizabeth S a year ago
One of the spookiest experiences of Tokyo is Joya no Kane on New Year’s Eve when all those bells that have remained untouched for a year begin to peal. Honseji is one in that midnight service.
Reply Show all 0 replies

Kim a year ago
Love the first photo with the beautiful pops of color!
Reply Show all 1 replies

Sleiman Azizi Author a year ago
It's quite nice, isn't it? Some good shots out there.
Reply
3 comments in total