I went to Ginza on a Sunday morning in November. Although living in neighboring Saitama Prefecture, I don't go to Tokyo too often, so it's been a while, but it felt good—nice to go to the big city sometimes.

I got off at Ginza Itchome station and was getting hungry, so I looked for a restaurant nearby. There was a large billboard in front of one of the buildings saying "Ganko Ginza-Ichome" and advertising lunch prices from one thousand yen. This sounded like a personal invitation to me and I went to the reception desk. It was ten past one. A friendly lady told me that there was a Japanese dance show about to start (at 1:30 pm), and if I wanted she would accompany me to a table straight away. I was a little unsure if this would still be included in my 1,000 yen lunch set; however, the friendly lady confirmed that the price would not change, and I agreed.

We entered a dining room with five tables. It was a very nice Japanese-style room, so the atmosphere was perfect for a Japanese dance. The dancers belonged to a group called Odori no kuukan (link in Japanese), which means "space of/for dancing". It seems that they started practicing at an early age, as I found they had very good skills.​

There were four performers in total and they played four programs, which in total lasted for about twenty minutes. Every program had a title, and understanding the meaning of title, you could see how the gestures match that title. I have to be honest, I saw this kind of dance in this environment the first time. It was very powerful and motion was surprisingly quick. It was hard to get some nice pictures, but I did my best.

At the end, I received a small origami (folded-paper) crane and a candy and I had the chance to talk to the dancers for a moment. There were other guests of course, a good mixture of foreigners and Japanese people, of all ages.

I got a seat near the entrance; however, I advise to get a seat a little more in the center of the room, where the view is better.

My meal was fantastic; it was o-tsukuri teishoku (sashimi-set), I added some noodles and paid 1,300 yen. That was a really good deal.

The dance is given on Sundays only, twice a day, at 12:30 pm and 1:30 pm. It's is a great chance to experience a traditional Japanese dance for the first time, and if you like it, who knows, you might want to check out the schedule for a dance performance at the new Kabuki theater. 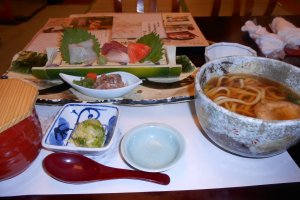 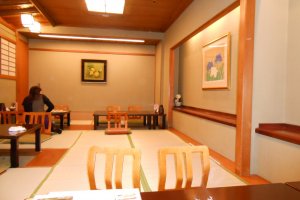 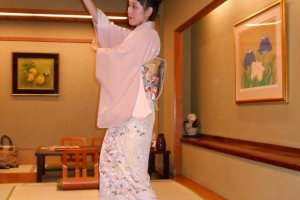 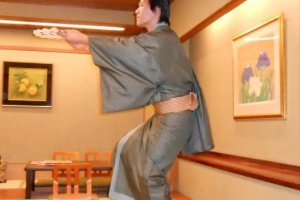 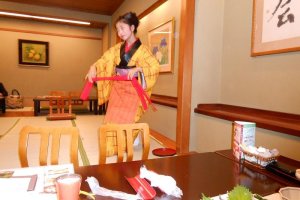 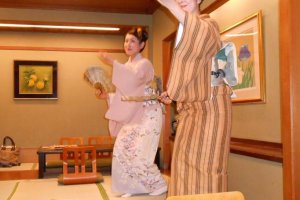 Masato Kitamura Author 6 years ago
The Ginza-ItuChoume-Ganko is near the center of the Ginza and near Kyoubashi. The price is not so high. The taste is not so salty. If you are going to Ginza,I recommend you visting the restaurant on Sunday at 0:00 pm or 1:00 pm.
Reply Show all 0 replies

Masato Kitamura Author 6 years ago
Origin of This restaurant is Osaka. So it’s lightly flavored
Reply Show all 0 replies

Nicole Bauer 6 years ago
This looks perfect for a Sunday lunch. Thanks for sharing!
Reply Show all 0 replies
3 comments in total