The best experience for fans of conveyor-belt sushi

Kura-Zushi’s philosophy is to have as few staff as possible, without reducing the quality of service. There are almost no staff working, since most of the sushi is made by robots, plates go through a robotic dishwasher, and managers work from the headquarters control centre to instruct their staff via earphones. On video screens they notice when customers seem unhappy, or a poster on the wall is outdated and needs to be replaced.

Since the sushi makes a long journey around all the tables on the conveyor belt, Kura-Zushi uses covers that protect the dishes from anything that may befall them on their way to your table. To get your plate out just lift it, and the cover opens automatically. As far as I know this is what makes Kura-Zushi unique: it’s one of the original and inventive solutions which the company can thank for its success. Just like your sushi is made by robots.

You might wonder if they didn’t forget about the sushi after reading all the science. In fact, Kura-Zushi succeeds when it comes to taste when looking at similar restaurant chains. There's a huge selection to choose from, and most of it will cost you just ¥100 per plate (plus tax), so it's time to dive in and enjoy this high-tech sushi. Take your fresh sushi - yes, fresh, since all plates contain a chip for the system to know when a plate has been on the belt too long and needs to be disposed of - and enjoy it right after you sit down.

After a while you'll notice a tower of plates has risen on your table, and you need to get rid of them, not only to make space for more sushi, but also because it's just wonderful how your chipped plate glides into a slot on its way to a robotic dishwasher. Also, every 5 plates you get a reward video, and for every 20 you get a reward from a capsule toy vending machine (Gacha Gacha), a plastic ball containing a little gift.

Ordering of items not on the conveyor belt is done through a touch screen. Here you can order drinks, soup and desserts, all covered by an English menu. Also you can order all the sushi the restaurant offers, since it can be brought to you by the ‘high speed lane’ on top of the conveyor belt infrastructure. If there's no price displayed, it's ¥100.

Kura-Zushi is not just a sushi restaurant, it is a quirky experience for those who like sushi or Japanese technology. There are restaurants all over Japan, often very close to train stations. 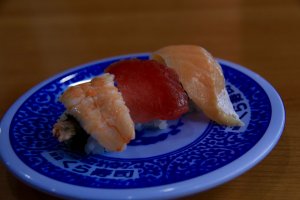 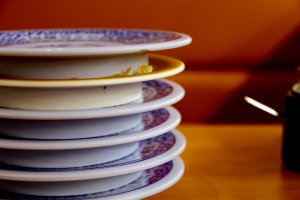 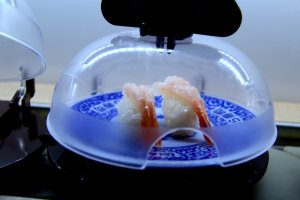 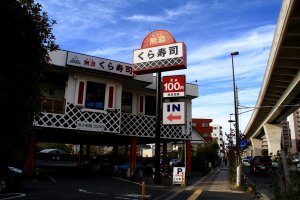 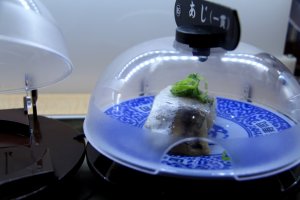 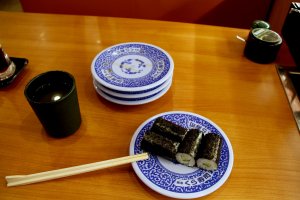 Sleiman Azizi 10 months ago
It's cheap sushi, no doubt, but the kids certainly enjoy the 5-plate award system.
Reply Show all 0 replies