With Halloween fast approaching, there could be not better place to spend it than in Tokyo. Casting aside the parties and fancy dress of today, ghost stories or Kaidan (literally “strange Tales”) have always been immensely popular in Japanese history and many have found themselves becoming Kabuki plays and even films in the modern era. My personal favourite and arguably the most famous is Yotsuya Kaidan, a tale of deceit, murder and revenge from the afterlife.

Like any story it has developed and grown over the years but the plot goes as follows. Tamiya Iemon is a ronin (low ranking samurai). Struggling to earn his keep he seeks a higher position to support himself and his wife Oiwa. The first act opens with Iemon in a heated discussion with Yotsuya Samon. The father of Oiwa, he suggests the separation of the couple at which Iemon becomes enraged and kills him. This intertwines with the story of Naosuke; a low life character obsessed with Osode, the sister of Oiwa. He also commits murder simultaneously to Iemon and they later unite and conspire, misleading the sisters into believing they will exact revenge upon the persons responsible for their father's murder.

The second act opens with Oume, the granddaughter of a rich samurai Ito Hihei. She has fallen in love with Iemon, and even though feeling she is more attractive than Oiwa she fears he will not want to become her husband. Bound loyally to his wife, they later meet on several occasions. Though Iemon develops romantic interests in Oume he remains honest to Oiwa and their relationship does not progress any further. The Ito family sympathises with Oume’s plight and conspire to disfigure Oiwa with a tropical poison disguised as a face cream.

Next is the better-known act of the story and has inspired countless Ukiyo-e paintings. Oiwa is sent this gift of face cream in the presence of Taketsu; a man Iemon has sent to his home in order to give him an honourable cause for divorce. She applies this cream and is instantly scarred; her face swells and bruises giving her a grotesque appearance. Taketsu, terrified by her face can no longer carry out his deed and instead shows Oiwa her reflection upon which she realises she has been deceived. Oiwa becomes hysterical and proceeds to attack Taketsu with a sword. He attempts to grab her but she evades and accidently pierces her own throat. In her final moment she curses the name of Tamiya Iemon.

Iemon proceeds to marry Oume but on the night of the wedding, Oiwa, now an Onryo (vengeful spirit) takes the form of his new bride. Horrified by the sight of his deceased wife he attempts to slay her but ends up killing Oume instead. Oiwa the spectre continues to haunt Iemon and in his terror and confusion slays the whole Ito family. Iemon is driven to madness by the continued hauntings of Oiwa. He flees to mountains where his dreams merge with reality and in his delirium he is slain in an act of compassion and revenge by the former husband of Oiwa’s sister, Yomshichi.

There is a shrine devoted to her in Yotsuya, the area of Tokyo where the story took place though Oiwa was supposedly laid to rest in Nishisugamo at the Myoko-ji temple. I visited in order to pay my respects as I’ve enjoyed this story for some time. Her resting place is easily found amongst the other graves as it lies beneath a grove of twisting and gnarling trees. I visited on a sunny morning, which wasn’t the most eerie of times but when I played the story at the back of my mind, I still managed to send a chill down my spine when I saw the stone. It’s said that those who visit out of mere curiosity and pay no respect will suffer the same swollen face she once did. 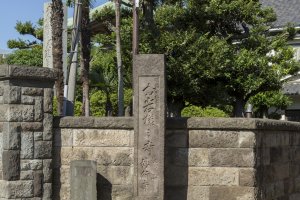 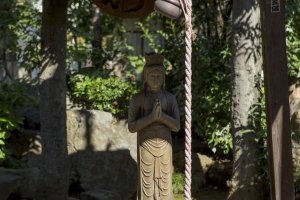 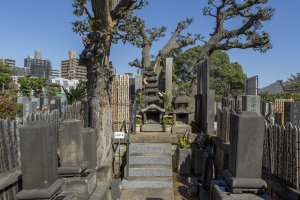 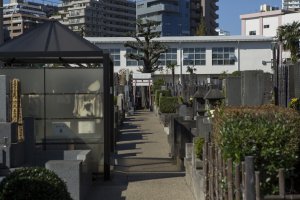 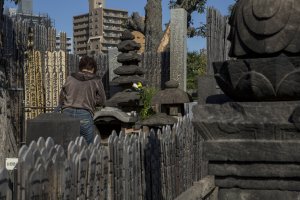 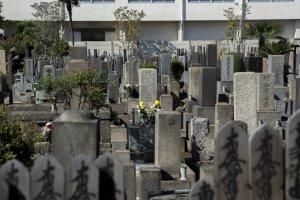