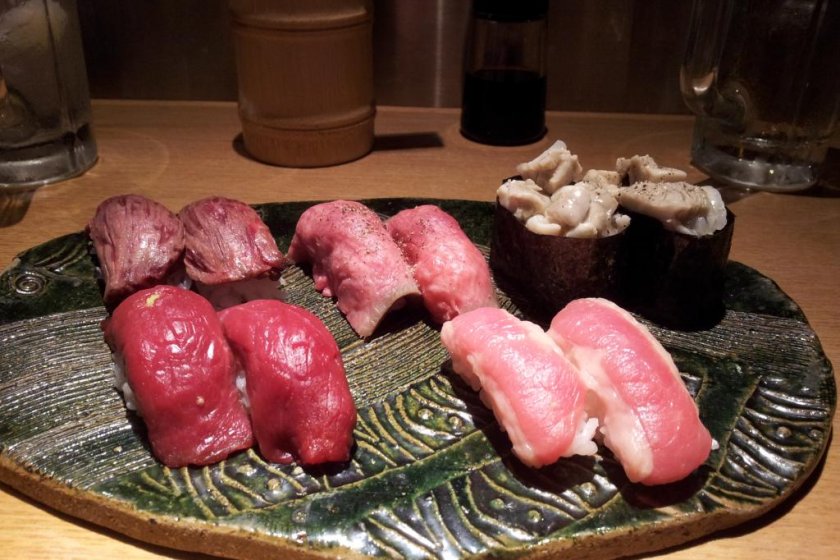 If there's one thing I love more than chocolate, it's meat. It was thus with watering mouth that I ventured to my first ever sampling of meat sushi. That's right, MEAT SUSHI! Oh praise be to the food Goddess for whomever she first gifted with this idea.

Niku Sushi is tucked into the Sangenjaya backstreets near a couple of vintage movie theaters, and within a 5-minute wander of the station’s Setagaya-dori exit we found ourselves outside the semi-hidden entrance walkway. Sister restaurant Ro to Matagi next door is a better landmark to look out for, with its deer-hunting motif visible on the signage. Ducking through Niku Sushi’s Hobbit-esque doorway to get into the 12-seater restaurant/bar, we were greeted by manager Akiyama-san and chef Miyamoto-san.

We had our choice of seats (no other customers yet on this mid-week early evening), and while oo-ing and ah-ing over the homemade shochu in the corner (grapefruit, lemongrass, shiso-ume flavors) the manager told us a little of the restaurant’s concept and background. The idea of eating meat raw is not new in Japan, but the idea of serving it on top of rice like at a sushi bar is apparently unique to the small chain of Niku Sushi restaurants. They are the inventors of this rather fabulous culinary delight.

Being in the hands of the attentive manager, we asked for recommendations rather than choosing from the menu, and Akiyama was eager to comply. Everything is reasonably priced, with items ranging from about ¥170 to ¥1,800 (the 5-piece mix plate). We were first given a healthy bowl of store-made gari (pickled young ginger) that was unlike any gari I had ever tasted before. Fresh, spicy and with slivers of celery mixed in – I was ready to steal the bowl from my companions and eat the lot by myself.

Digging into the gari required us to open up “fortune” papers that were the wrappers around our chopsticks. Each fortune is a joke version of what you can get when you go to shrines in this country, though they are written in Japanese only. Mine told me that I would be part of a love triangle with Beyonce and Michael Schumacher. Sweet!

Our drinks were brought out along with our first dish, basashi (raw horsemeat). I spread some ground ginger onto my slice of bright red meat and down the hatch it went. It was incredibly delicious and surprisingly tender. The texture was even reminiscent of maguro. I may never be able to look at a horse again without thinking, “I ate your delicious cousin.” I highly recommend giving it a try.

After the basashi came the meat sushi plate (Fukitaro moriawase). Succulent mounds of meat-covered rice were placed in front of us, and mercy me, were they good! I started with the futaeigo (horse) which was slightly chewy. The akami (horse again) was more tender and perhaps my favorite. The wagyu (beef) left my taste buds begging for more, while the gyutan (tongue) was divine and chewy. The last piece was shimedori (chicken), which had a slight vinegary taste and was a perfect way to cleanse the palette.

Since we ordered the meat plate we were able to play a little dice game to win prizes, which ranged from a free drink to money off your order. They are definitely playing up the social side of things at Niku Sushi.

Last, but by no means least, we tried the house specialty, flame-grilled beef slices. Akiyama-san got behind the counter for this and placed a little mountain of beef slices on a plate. Next he grabbed two cooking torches and proceeded to act like a pyromaniac, ambidextrously searing the meat to sizzling perfection. We tucked right in and I think I almost proposed marriage to the man, who had so impressed my tastebuds and tummy. The meat was slightly oily but very tender. We cleared the plate in record time and sat back to enjoy some banter with the staff and to finish off the bowl of gari.

Having stuffed ourselves with a farm full of meat, we bade goodbye to Niku Sushi and toddled off to relive the “best of” moments of the evening.

If you’re looking for something a little out of the ordinary for your dinner, then Niku Sushi will definitely fit the bill and fill the belly.

Find out more about Sangenjaya. 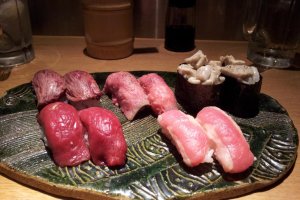 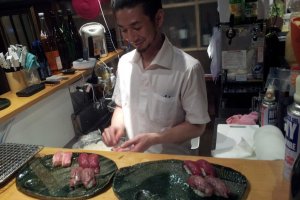 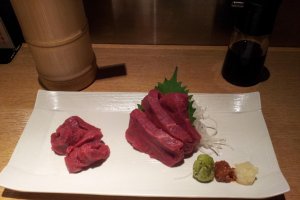 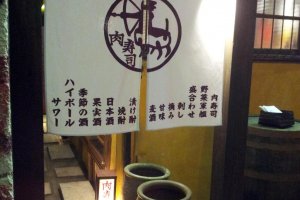 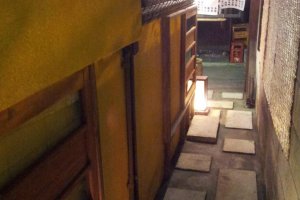 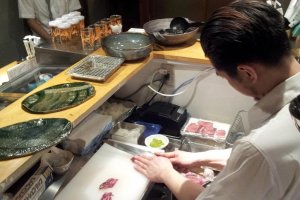 Sleiman Azizi 2 years ago
I'm up for it. I'm a fan of the aesthetics of sushi and that photo looks great.
Reply Show all 0 replies

E. Vika Frary Author 8 years ago
Thank you for the comments ladies. We had an in-depth chat with Akiyama-san about the safety of the meat. The basashi was truly rare. Something to do with horses having a high body temperature which makes it safe to eat raw. As for the other meats, the restaurant is incredibly clean and since all the food was prepared in front of us, the "danger" factor did not even enter my mind. I believe the other meats were very, very, very slightly heated to ensure that they were safe to eat.

The four of us felt absolutely fine the next day. I wanted more!

I agree it isn't for everyone, but it was something that I had never tried. I am glad I gave it a go, and I would go back :)
Reply Show all 0 replies

Nicole Bauer 8 years ago
Hm, for sure not everybody's cup of tea, but there are delicious raw meat dishes in other parts of the world too. What about steak tartar, beef carpaccio etc.! In Germany we put ground pork on a sandwich, salt & pepper and some onions—always a party highlight!
Reply Show all 0 replies

JJ Walsh 8 years ago
Fascinating, but to be honest still sounds completely disgusting, but if you are crazy about meat then why not raw meat?
thanks for writing such an interesting review, but I wonder how you felt the next day? Did you ask the manager about safety? there have been some horrible, deadly food poisoning incidents in Japan in the last few years with raw meat (especially dangerous it seems for children).
Reply Show all 0 replies
4 comments in total