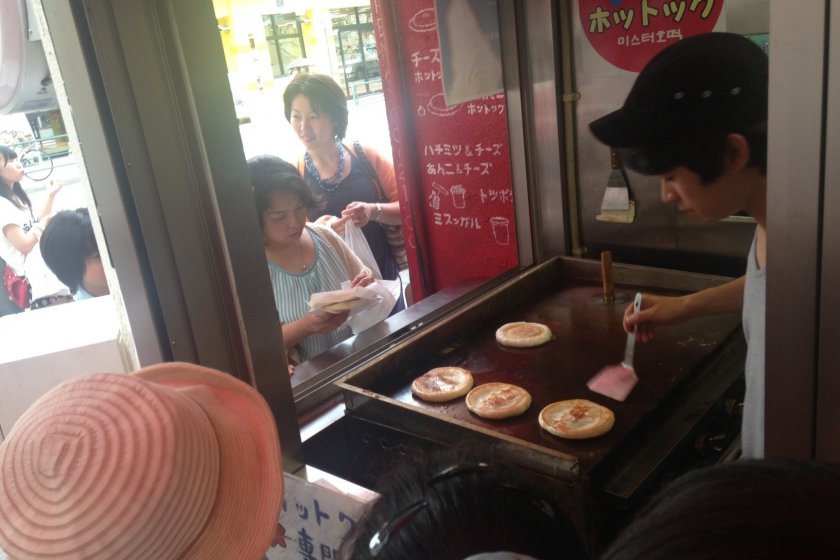 Korean sweet worth braving the heat

With summer creeping into Tokyo, its easy to argue that at home with air con blasting is the best place to be until autumn.

But just beyond the shadows of Shinjuku's skyscrapers in Tokyo's Korean neighborhood, a group of people stand waiting as proof that some things are simply worth braving the heat.

Despite the rising mercury, a lengthy queue forms in Shin-Okubo outside of the Mr. Hottoku Korean sweet stand.

This tasty treat--called "Hotteok" in Korean and "Hottoku"in Japanese--could also be called a crepe and pancake hybrid, with gooey fillings and a chewy outer batter.

Mr. Hottoku, opened in April of 2012, encourages guests to watch as the Korean staff whips, flips, and toasts the batter in the traditional style.

The brightly colored stall sits wedged between apartment buildings and shops selling Korean face packs. As if a testament to the street stand's popularity, there are signs hung up around the area asking guests not to congregate after receiving their treat.

With a cut-out window on two sides of the stall, Mr. Hottoku is open for guests to peer in and watch the staff.

One cook rolls out balls of fluffy dough, sprinkling inside the requested fillings, before passing the gooey creation to his co-worker. The Hottoku cook then uses his circular spatula to smooth oil onto a blistering hot plate before pressing the lumps into their desired pancake shape.

The circles of dough magically become a crisp golden brown, and the process is repeated for the next customer--and the next.

With a wheat batter, this street stall food is typically enjoyed during Korean winters and stuffed with brown sugar, cinnamon, honey, or even peanuts. At Mr. Hottoku, the flavors are kept sweet and simple: cheese, honey, honey cheese, or sweet red bean paste and cheese.

And enjoyed year round.

In keeping with the "Mr." in the business name, the Mr. Hottoku stand boasts all male staff and actually encourages anyone studying Korean to stop by and chat while waiting on their snack.

Anyone wanting to get the full street stall food experience can't leave Mr. Hottoku without a cup of spicy Toppoki snacks , called "Tteokbokki" in Korean.

The Mr. Hottoku stand claims that these braised rice and fish snacks capture the flavors of "back home in Korea" just as well as their pancakes.

Many guests ignore the signs to move along and lean on nearby railings near the road to chomp into their chewy dessert.

Summer heat waves may encourage guests to take their Hottoku and Toppoki indoors, or with a side of ice cream.

Ultimately, this season may be hot, but with hungry snackers lining up, it would seem that Mr. Hottoku is hotter.

Hi, I'm Kristen. I'm a native Floridian. Living between Yokohama and Tokyo. I've worked as a journalist, backpacked the UK, and floated down a few rivers in Mexico. Receiving my degree in Journalism and International studies, I'm always foraging for a good bite or a good story. For a while, I was a food reviewer for some Floridian publications, seeking out family-owned and localized restaurants with one-of-a-kind dishes. These days, I teach English at a little school near the beach—in Japan. I spend my free time staring at sakura, snagging sushi off the conveyor belt, and sampling all sorts of new things. Let's hope that whatever it is-- a lack of peace or overwhelming curiosity--it'll keep me thin and keep you informed. Welcome to curiosity, culture, and cuisine. Be whisked away like I have. 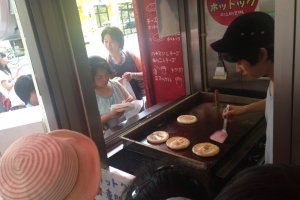 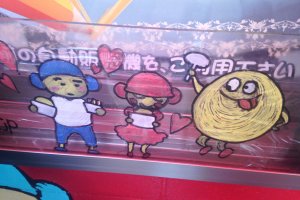 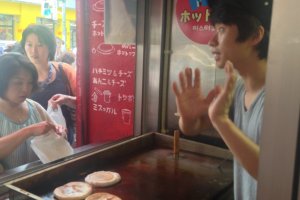 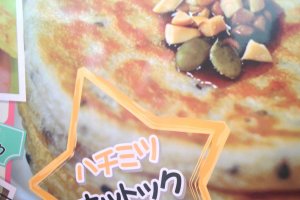 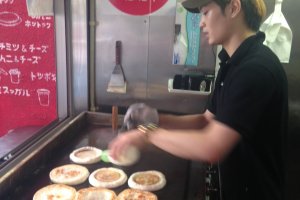 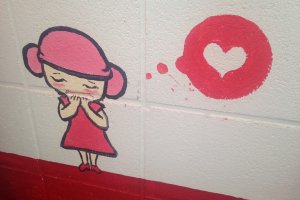 Kim 2 years ago
A crepe and pancake hybrid?! I've gotta check that out!
Reply Show all 0 replies