The story goes that Kokuchin, a high ranking Shugendo disciple, discovered a light in a curious looking chunk of rock now known as the zuikoseki stone. Emerging from this light were the two deities Susanoo and Asuka who suggested that they be enshrined there so as to protect the area from illness and disease.

Thinking this a good idea, Kokuchin established Susanoo Shrine and dedicated it to the two deities - the younger brother of the sun goddess, Susanoo took down a giant eight-headed serpent while Asuka possessed the power to judge between good and evil with a solitary word.

The shrine today features three torii sacred gate entrances as well as a monument inscribed with a poem by haiku master, Matsuo Basho. This inscription, incidentally, has been designated as a Cultural Property by Arakawa City but to further the shrine's spiritual depths stands a huge thirty metre tall gingko tree with a circumference of over three metres.

Legends state that a mother, unable to produce enough milk for her child, drank some tea made from the bark of this tree. The mother began to produce and the child was fed. With the kind of gratitude that perhaps only a mother can know, she placed an ema votive onto the tree in thanks. To this day, the tree sees scores of ema offerings from mothers looking for help in the feeding of their children.

Another part of the shrine recognised by the city is its Tenno-sai Festival in June. Carrying a mikoshi portable shrine through the neighbourhood, the shrine is violently rocked back and forth until it almost tips over. Countering this is the almost superhuman effort to stabilise the shrine before it completely topples over.

An important local shrine, Susanoo Shrine is well worth the visit.

An 8-minute walk from Minami-Senju Station on the Hibiya, JR Joban or Tsukuba Express Lines or a 10-minute stroll from Minowabashi Station on the Toden Arakawa Tram Line (now also known as the Tokyo Sakura Tram). 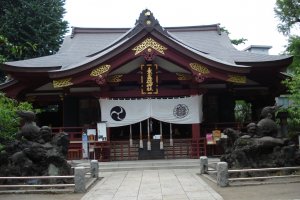 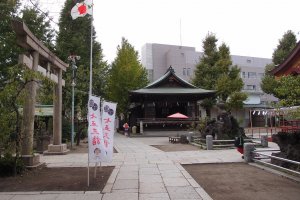 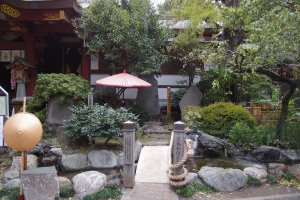 Elena Lisina a year ago
I like unusual koma-inu! :)
Reply Show all 1 replies

Sleiman Azizi Author a year ago
A bit of individuality goes a long way.
Reply

Kim B a year ago
I enjoy learning the unique stories behind shrines and temples here!
Reply Show all 1 replies

Sleiman Azizi Author a year ago
They are often pretty interesting.
Reply
4 comments in total