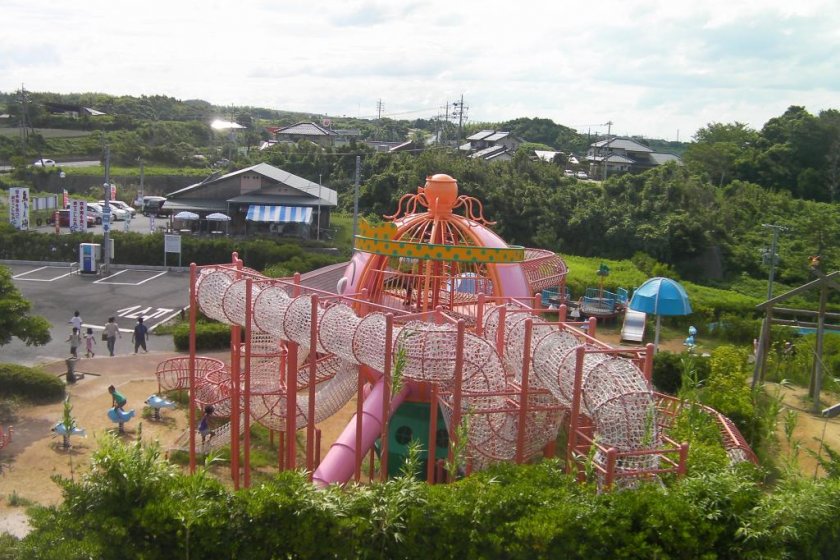 A perfect stopover on your Tottori drive

Driving along Route 9 in Tottori is such a pleasure because you get a continuous look at the Sea of Japan that with the exception of a few uninhabited islands is simply a vast open aquamarine colored sea that extends to the horizon. It’s too bad they don’t make convertible minivans so I could totally play the part of cruising through Japan’s Malibu.

I was feeling a little tired and needed to stretch my legs and the kids needed a bathroom break. Luckily, Port Akasaki was there for us. I pulled into the wide parking lot that needed every bit of space it had to accommodate the dozens of people that had the same idea that I did.

This ultra-rest area was a lot more than I expected. First of all, there was the main building that housed the shops and stalls full of local food and souvenirs. Seafood and agricultural products seemed to dominate. There was ice-cream to ward off the intense heat of the day and plenty of drinks available from stores and vending machines.

As I walked along the sidewalk I noticed what appeared to be some kind of park on a hill. As I got closer I came across a conspicuous building that turned out to be modeled on traditional structures in Korea. There were all kinds of Korean themed souvenirs for sale. A sign nearby informed me that the site was called Kaze no Oka or Wind Hill in English. It was a Korean garden complete with several reddish pavilions accented with designs that swirled together like a wave hitting the shore.

I walked back towards the entrance of the main building looking for my kids but they had already discovered something that was meant for them. There was a hidden playground behind the rest area. The focal point was this massive metal octopus with a body that you could climb into and a leg that formed a sliding board. Above the octopus was another slide with the ever present sea view.

If you want to experience Port Akasaki in Kotoura Town, Tottori Prefecture and you need to use public transport, the nearest station on the Sannin line is Yabuse. There is a beach nearby so you can tack that on to your trip as well. 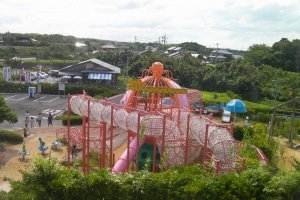 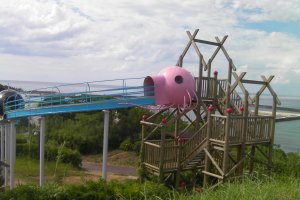 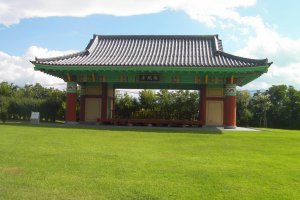