The women reach the Tateyama side of the bridge

It is the middle day of Autumn Equinox. Picture about 300 women dressed in white death robes, straw hats, blindfolded and walking over a red bridge covered in cloth. It was the path to salvation for those who could not climb sacred Tateyama and therefore enter heaven.

Nunobashi Kanjoue (布橋灌頂会) began in the Edo period when women could not enter the mountain area past Ashikuraji. It was abolished in the Meiji period. The festival was begun again as a re-enactment in 1996, 2005, 2006, 2009 and 2011. It is considered an important cultural event.

On this day, I was so terribly fortunate to participate with about 150 women from across Japan and was also the first foreigner known to partake, and there were about 3,000 spectators.

I am writing this one year from when this happened, on the first night of autumn equinox. I take a deep breath - wow! How many times did this event happen? How many women? What were they thinking on this night, before the event? I have had the opportunity to go pray a number of times at Oyama, I ride my bicycle and walk all around in these mountains but once it was not like this. I think back to this amazing event and am so grateful to have been a part.

We met early on the morning, the middle of autumn-equinox, at one of the huts where pilgrims once stayed. We dressed in the white kimono specially made for us. Buses soon took us to the small Enma Temple, where the ritual began.

Next we began the procession, leading down the shady path to the bridge, accompanied by priests and musicians playing wonderful traditional music. We walked in time with the music –step, step, stop; step, step, stop; 1, 2, 3; 1, 2, 3. It was said in the past that those who were not pure of heart would fall off the bridge.

We walked into the Ubado where we prayed and meditated before the doors were all opened to Tateyama. Afterwards the women of Ashikura temple served us with local foods. It was all one of the most profound and amazing experiences of my life.

Not only do you feel timelessness at this ritual at this ritual – it may as well be the Edo period or earlier - , the surroundings are just so stunningly beautiful - the mountains and forests of the Northern Alps. You can visit the sites of the ritual at any time. The next event is scheduled for 2014.

History and how this festival fits in with Oyama Jinja

Involvement in these rituals were said to bring salvation even though they had not climbed the mountain. In the Edo period when the Tateyama religious site comprised of 7 shrines and 24 temples, the most important of which were Oyama, Ashikuraji and Iwakuraji (to learn more about these please look at my stories on them).

Tateyama (along with Hakusan and Fujisan) was an especially sacred mountain. It and the surrounding areas were important in Japan’s mountain religion, Shugendō. Some religious disciplines believed Tateyama was actually Amida’s (Buddha’s) Pure Land of Sukhavati.

Oyama Jinja (shrine) on the Oyama peak of Tateyama was the destination of a pilgrimage, and the trek was said to bring salvation. At Ashikuraji and Iwakuraji, as well as the shrines, Shugendō priests ran lodgings for pilgrims and also guided climbs to the sacred peaks. Iwakuraji had more that 20 sub-temples and Ashikuraji about 30. Priests ran canvassing campaigns to raise funds and the religion spread across Japan. Amulets of Gongen, a Japanese kami (deity) who came to guide people to salvation, were sold and distributed to potential pilgrims as part of this.

The whole Tateyama area is shrouded in mystery and legends dating back a thousand years or even more. They are all included and interwoven in the pictorial Tateyama Mandara[1] of Ashikuraji tradition, as are many of the things I have talked about in my stories on the current three Oyama Jinjas.

The Mandara describes the Nunobashi ritual that took place at Ashikuraji, where the Enmado (Enma Temple) and Ubado/Ubagami (a special hall), are linked by a bridge. Nuno means ‘white cloth’ so hence ‘Cloth Bridge,’ and also ‘Bridge of Heaven.’ On the middle day of autumn equinox women were allowed to enter these areas normally forbidden. In the Ubagami they worshipped and practiced rituals and prayed for rebirth in paradise. The ritual was a re-enactment of death and rebirth. Even though Tateyama was forbidden to women there are so many things in the local religion here that relate to women such as in the place-name, deities and legends.

The cults of heaven and hell were prevalent in this area of Japan. Around Murodo, just below sacred Tateyama is the forbidding landscape of Jogokudani (Hell Valley), which oozes with sulphurous gases and bubbling pools that were considered to represent hell.

Shugendō was abolished in the Meiji period.

The Ubado is just past Ashikuraji Oyama Jinja. Just follow the major road route 43 from Toyama JR station nearly all the way to the Jinja. The road roughly follows the Dentetsu local train line. At Daisenji, the train stop before Iwakuraji, route 43 takes a turn to the left, over a level train crossing. Continue on straight ahead (don’t turn) over the Joganji River, past Iwakuraji Oyama Jinja, and follow the signs to Tateyama, turning onto road 67. It is another 15km further on from Iwakuraji, and is on your left as you go through the village of Ashikuraji.

Catch the train to Chigaki on the Dentetsu line. The Dentetsu private train lines all go from Dentetsu Toyama station, adjacent JR Toyama station. There are four lines, and to get to Chigaki you take the line for Tateyama, via Terada. The trip takes about 48 minutes and costs ¥990, and there is roughly one train every hour.

From Chigaki you can catch a bus all the way to Enma Temple, a distance of about 3km. Buses are only about one an hour, but it is actually a very pleasant walk along the road number 67. It is slightly uphill but the gradient is low.

Hi! My name is Kerrie and I am from Lismore, Australia but now live in the small mountian village of Omi, in Toyama prefecture. I love the rural life and have many hobbies and interests. I love to be active and do as much as possible. I enjoy karate and kendo, bike riding, snow boarding (in winter only of course!), watching anime and gardening.My main interest and hobby is Japan. I have travelled extensively throughout this wonderful country to learn and experience it more. I would love to share my passion and knowledge of Japan with others, and to encourage and help people to discover the REAL Japan. 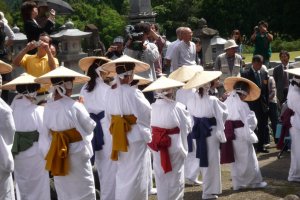 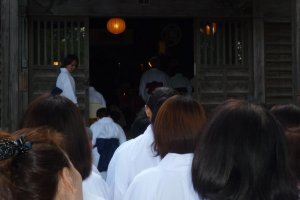 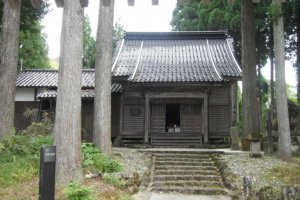 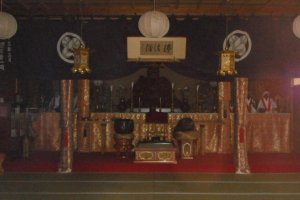 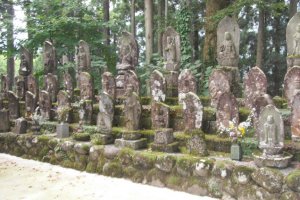 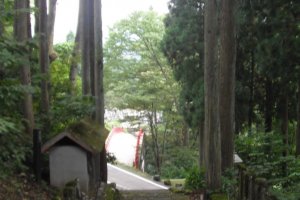