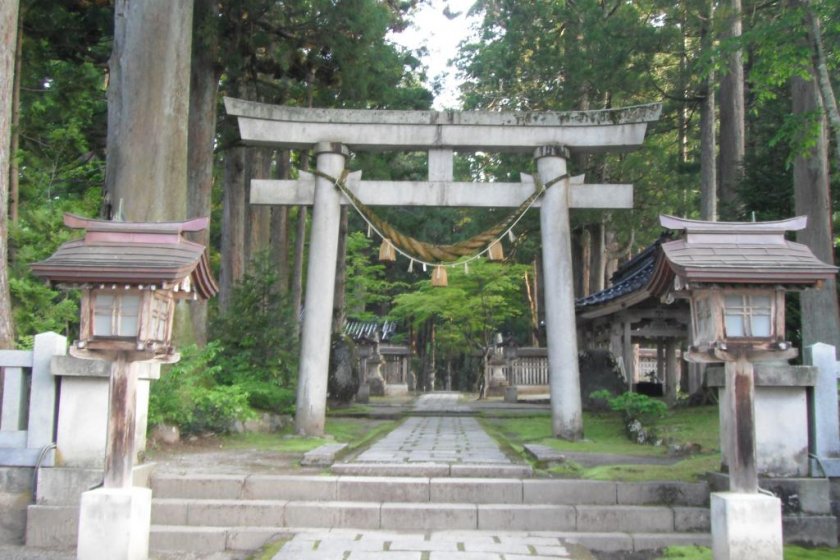 Part 2 of 3 on Oyama Jinja Chugu

Ashikuraji is a small village just below the Tateyama Caldera, by the Joganji River, and it is also one of the sites of Oyama Jinja. This shrine, dating back to ancient times of mountain worship has three sites, Iwakuraji, Ashikuraji and Oyama, and here is located the midway shrine or ‘chugu.’

The first time I saw Ashikuraji Oyama Jinja, I knew it was a very special place, even though I knew nothing about it or its name even. Driving in the lower mountains around Tateyama, the sacred mountain in south east Toyama Prefecture, I noticed a shrine tucked into the forest as I went through Ashikuraji village. I of course stopped to look and was amazed by the towering cedar trees and size of the complex - it was the first time that I visited a shrine in the forest, not just woods or a copse of trees.  It was November and already the air in the mountains was cool, though it was a beautiful clear day.

The numerous buildings are spread through a beautiful forest, and the grounds cover a fairly large area. The forest extends from the road front, where you enter the torii gate (see notes below entering shrines, purification and prayer below), and back beyond to the hills and nearby Chubu Sangaku National Park.

An important element of Shintō is purification. After walking through the torii, you will find on your right a stone basin. There is a dragon with water running from its mouth perched above the basin, and this is where those who enter this shrine should ritually purify themselves. After this, continue along the path and pass the very large Koma-inu or lion-dog guardians and a number of deities – stop and say a few words or pray. Cross the small arched bridge, representing a transition into heaven. There are many more winding paths and deities to visit. The main shrine building, Haiden or Worship Hall, and Honden or Inner Shrine, are located to the far side of the grounds, and are nestled into the forests at the base of the hill.

This is a beautiful and peaceful place any time of year. Escape summer’s heat in the cool greenery, and listen to the cicadas. Autumn brings beautiful koyo, or changing colors of leaves. Winter finds the shrine a glistening white, and you make your way on the paths through the snow. Spring of course finds the locality frosted with cherry blossoms – and a feature of the mountain areas is the range of colors in the flowers of mountain varieties

This is a tranquil and historic place where one can relax, meditate, contemplate, or get away from the rush of the city. You can enter the haiden and quietly relax. Enjoy the traditional décor, artwork, the smells, and catch a glimpse of history for this local area.

Oyama Jinja once flourished as a base of the Tateyama mountain worship. Prior to the Meiji era, women were not permitted to travel in the mountains or to Oyama Jinja at the top of Oyama, the mountain. They came from all over Japan to attend a ritual held at Ashikuraji called Nunobashi Kanjou, held every year on the autumn equinox. If they attended this ritual it was believed that they would still go to Paradise after they died.

There is a legend behind Ashikuraji and linked to the mountain religions. It is said that in 701, young Saeki Aariyori was hunting in the forests near his home Ashikuraji in the foothills of Tateyama. He saw a white dove and followed it all over the mountainside. He was suddenly confronted by a bear and shot it with an arrow. The wounded bear ran and Saeki followed it to a cave. Saeki was about to kill it when the bear turned into a golden image of Buddha. Saeki was immediately converted to Buddhism and spent his life dedicated to the work of Buddha.

Buddhism is thought to have first come to Japan through Korea, in the fifth century, being first accepted by the imperial court and disseminated through the land from the top. It did not replace the indigenous religion but always accepted and recognized its existence and power, leading to numerous varieties of Shintō-Buddhist amalgamations. Buddhism is famous for its harmonious co-existence with other religions.

Festivals are held at this fully active and operating shrine all year round.

Hana Matsuri - Buddha’s birthday, early April (though is sometimes celebrated in May)

Shichi-Go-San - for three- and seven-year-old girls, and three- and five-year-old boys held throughout the month of November.

New Year’s Eve – a very special event and this is where I will be on 31 December!

There are a number of variations on this, but I think it is good manners and shows respect if you take a moment to observe these practices in a shrine.

When you enter, do not walk through the middle section – this is where the deities leave and enter. Go to one of the sides, and just before passing the side pylon, face ahead of you where you will go, stop, and bow. Do the same in reverse as you leave, facing into the shrine, stop and bow.

To purify, go to the basin, fill the cup from running water, pour a little on your left hand, then right. Pour some water into your hand then use this to rinse out your mouth. Finish by rinsing the dipper cup and replacing it.

To pray, stand before the deity and throw coins into the offering box. If  you are at the main shrine there will be a bell in front of the offering box, which you should ring by pulling the rope.  Bow twice, clap twice, and then pray. Finish with one more bow.

HOW TO GET THERE

If you have a car, it is very easy to drive to Ashikuraji Oyama Jinja. Just follow the major road route 43 from Toyama JR station nearly all the way to the Jinja. The road roughly follows the Dentetsu local train line. At Daisenji , the train stop before Iwakuraji , route 43 takes a turn to the left, over a level train crossing. Continue on straight ahead (don’t turn) over the Joganji River, past Iwakuraji  Oyama Jinja, and follow the signs to Tateyama, turning onto road 67. It is another 15 km further on from Iwakuraji, and is on your left as you go through the village of Ashikuraji.

Catch the train to Chigaki on the Dentetsu line. The Dentetsu private train lines all go from Dentetsu Toyama station, adjacent JR Toyama station. There are four lines, and to get to Chigaki you take the line for Tateyama, via Terada. The trip takes about 48 minutes and costs ¥990, and there is roughly one train every hour – check the Hyperdia Timetable and Route Search website for trips ANYWHERE in Japan! It will tell you a myriad of details including costs, transfers, distances…

From Chigaki there are two options. A local bus runs along the valley from right outside Chigaki station and there is a stop right across the road from Oyama Jinja.

Buses are run only about one an hour. It is actually only about 2 km and it is a very pleasant walk along road number 67. It is slightly uphill, but the gradient is low. 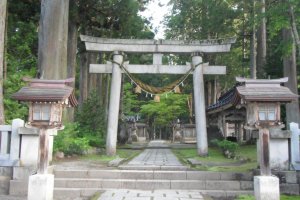 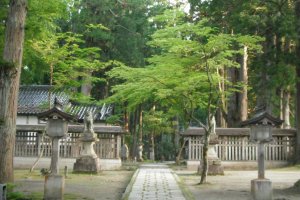 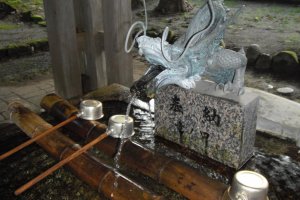 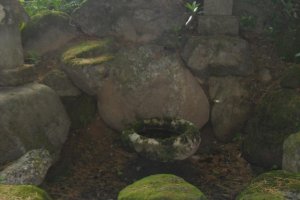 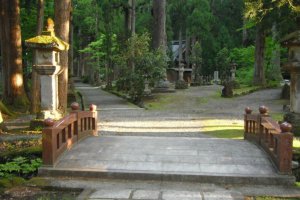