Home for Christmas after all

Heaven put me in Tanabe, a World Heritage Site, for Christmas. Here, the Kumano Kodo, an ancient classic pilgrimage trail, turns pilgrims towards the three fabulous Grand Shrines, the Kumano Sanzan. On Christmas Eve, a live band strummed out carols, station staff were bedecked with red bow ties, and mulled wine and tidbits were served. I was at home after all for Xmas! But I already felt of Tanabe as home - when you have to be away from Home.

The modest town exudes a comfy feeling, absent of noise created by loud tourist trappings, and everything appearing ordinary and uncommercialized. Apart from banners with the distinctive Yatagarasu, a three-legged bird insignia proclaiming Tanabe’s status, the only visible mentions of the Kumano Kodo was information about how to get there on the bus stands. There wasn’t a splurge of restaurants named Kumano or boasting a special Kodo cake, Yatagarasu shaped cookies, or other tourist gewgaws.

Tanabe is a grid of small streets, with traditional shops, selling for example homemade confectioneries, a Japanese umbrella and doll shop, and of course, ume, Tanabe’s famous pickled plums. How not to love? The only dangerous traffic were the deadly matrons in crash helmets dashing around on scooters. There is an “entertainment” district, Ajijoji - no Sweet Baby Jesus there I guess. Ginza Street would be Tanabe’s contemporary shop scene, with a café or two, minus any crass gentrification. I remember the butcher’s shop. There was a mummified cat in the window. Minato Street had non-branded boutiques with beautiful knits and a yarn shop. Around Tanabe there were also a few bookshops. I don’t understand Japanese, but it was a treat to just to go in and smell the books.

Perhaps visitors don’t stay in Tanabe, or not for long. This is a shame. Tanabe’s own temples are part of the passage through the Kumano Kodo. Aritoshi is memorable not only because of its centuries old camphor tree, but also its story. The deity Fujiwara was challenged by a visiting deity from China to discover how to pull a string from one end of a conch shell to the other. It was war if he failed. Lucky for Japan he succeeded. He tempted an ant with a sugared string, with more on the other end. The ant went for the sugar, pulling the string through. Not for nothing is Fujiwara known as the Deity of Wisdom. Aritoshi is a beautiful shrine whether or not you believe this tale, or the other one about its camphor tree which supposedly acted as a fire extinguisher during a long ago earthquake.

Other temples, other tales. Tokei Jinja with its duelling roosters, humungous camphor tree and background shroud of forest. Jizo-ji where the remains of a great Sumo wrestler lie. It had a poignant installation of a solitary chair, cordoned off.

Tanabe is by mountain and sea. Food-wise, it is not a parade of food possibilities, but you won’t starve. Even with my strict budget, I didn’t starve. Surprisingly the konbini which are ubiquitous elsewhere were missing. My Hotel Hanaya offered a veritable museum of American memorabilia but nothing edible. Instead I had great breakfasts and dinners under the Xmas tree at the Station Hotel, and homemade bentos for lunch from a simple street joint. The bakery supplied other joys.

It was cold in Tanabe, but I felt at home because of the warmth of the people. Isn’t this the thing, it’s people that make a town, the way trees make a temple. So it was the saints of patience at the Tourist Information Centre, the bakery ladies who fed me daily sample stollen, feeling adopted by the the warm waitresses at the Station Hotel that made Tanabe special. At Horinji Temple, the Abbott’s wife gave me a personal tour, then a bag of chocolates and Fuji apples. So I was not blue at Xmas. I was in Tanabe. 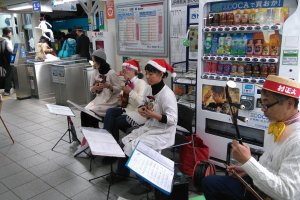 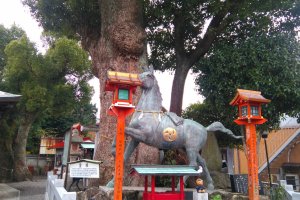 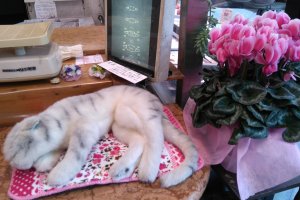 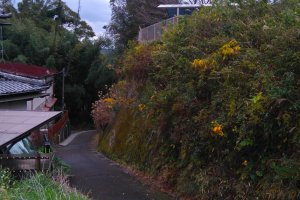 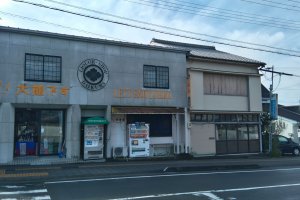 Kim B a year ago
I loved what you said about the weather being cold, but feeling warm because of the people. Sounds like a perfect Christmas celebration to me!
Reply Show all 0 replies
1 comment in total