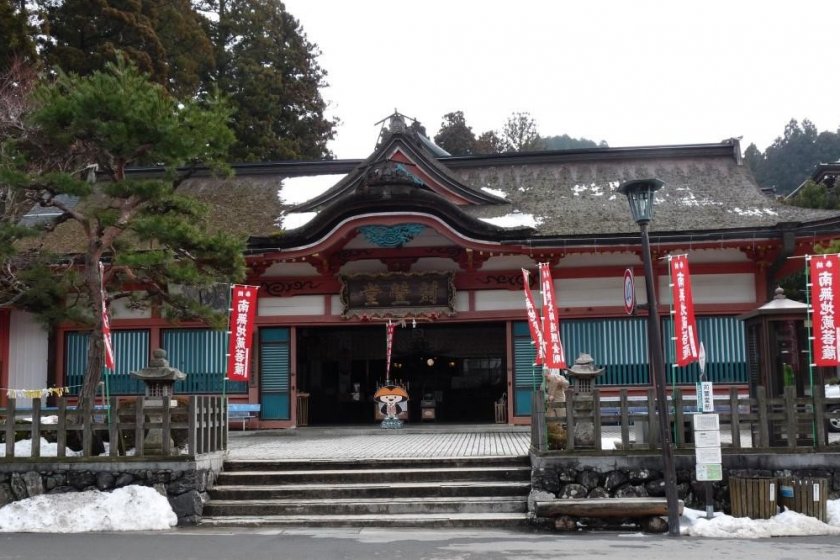 Spending the night in a Shukubo

I stop at Karukayado (the Hall of Karukaya). The Karukaya is a story of a boy called Ishidomaru who came to Koya-san in order to meet his father. The boy met a monk, who was, in fact, his father. But, as the monk had renounced his past life for the priesthood, he told the boy that his father had died and sent him back to his mother at one of the inns at the edge of the mountain. (At this time, women were not allowed to enter Koya-san and so seven temples were built on the periphery for women). Ishidomaru found his mother dead at the inn and so returned to study under the monk, never knowing the monk was his father. The hall is now preserved as a hermitage where father and son practiced asceticism together for over forty years. I walk along the corridor of the hall that houses the shrine and follow the paintings on the wall that depict the story.

In the centre of Koya-san are the Kongobuji and Danjo Garan complex. The Kongobuji is the head temple of Koya-san Shingon Buddhism. The temple comprises two temples that were combined together in 1869. It has a feel of history and tradition in its plain, ancient wooden features. It was in the willow room of the Kongobuji that Toyotomi Hidetsugu, the nephew and retainer of the great Toyotomi Hideyoshi, committed seppuku (ritual suicide by disembowelment) after being accused of plotting a coup.

The complex opens up further with the old, dark wooden Fudodo on the left sitting prettily in front of a lake. This is the oldest existent building in Koya-san built in 1197. Opposite is the magnificent towering red Daito (Great Pagoda). Kobo Daishi planned the Daito as the centre of the monastery. The original construction began in 816 and was completed seventy years later. The forty-nine-metre high red pagoda that is here now had to be rebuilt in 1937. Inside there is a golden statue of Buddha Mahavairocana.

This area is spectacular. The ground is covered with snow or, where it has melted, with wet orangey-brown gravel. Beyond the Daito are more sacred buildings, including the Meido (Portrait Hall), where it is said that Kobo Daishi had residence. This building is closed to the public and is only opened once a year, on the anniversary of the day Kobo Daishi began his long (and continuing) meditation. Inside is a portrait of Kobo Daishi painted by his disciple Shinnyo.

At Rengendani, it’s a short walk uphill to my shukubo - a temple that provides lodging. The outside of the shukubo looks like an old, traditional temple, with a rock garden and carp pond. Inside, I change into geta and am shown to my room by a monk in full robes. Inside, it’s completely modern except that there is no heating. Later, I change into my kimono and warm outer coat and I’m collected from my room by the monk for dinner. My private dining room is a small room along a cold, glass panelled corridor. The shoji on one side has simple tree paintings on them. The others are bare. The glass doors are closed and in the middle of the floor are a cushion and two red trays with cold food laid out. Beyond the glass doors, I have a view of the rock garden, now lightly lit in the dark of the evening and sprinkled with what remains of the snow. Another tray is brought in with hot food, sake and tea. I take my time to sample it all. It’s one of the best meals I have ever eaten and in one of the most amazing locations. It takes me nearly an hour to finish everything.

Just before seven o'clock in the morning, I’m lead to the older part of the temple, through the cold corridors, to the shrine room. At the back, there are cushioned benches on either side of the central aisle. I sit down. Two small side rooms have hundreds of red lanterns on the ground. In the middle of the room, there’s a model of a golden pavilion in front of the altar. From the ceiling, more lanterns and pendants hang. The only light comes from several rows of lit candles. One monk sits directly in front of the altar and one monk to the side. The one to the side begins a slow chant and soon the monk at the altar begins a louder chant. Both use various bells, chimes and cymbals to wake the Buddhas. Halfway through the chanting, one of the monks comes to me and asks me to drop three grains of rice into a bowl. The monk then returns and they chant in unison again. Without intending to, I find myself falling into a trance. I’ve been given a sheet of paper with the words to the ‘Heart Sutra for the Perfection of Wisdom’ which is written in Japanese and English. The Japanese is also spelt out phonetically in English. Amazingly, I can pick up the sounds and I’m able to chant quietly along with the two monks as they recite the sutra. Time seems to stand still.

After forty minutes or so, the morning ceremony is finished and I’m taken directly to breakfast. The rock garden looks very different in the early morning daylight. Once breakfast is done, sadly I have to leave the inn. At the stop for the bus back to Koya-san station, there’s a sign on the wall which reads: ‘Beware of Bears! Recently bears were seen at each area in Koya-san and there are so many eyewitness reports. When you go out, don't go out alone.’ I now realise why I have had the wonderful sights of Koya-san to myself. 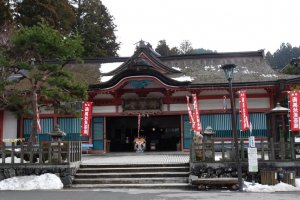 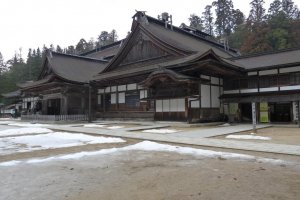 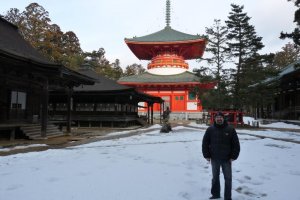