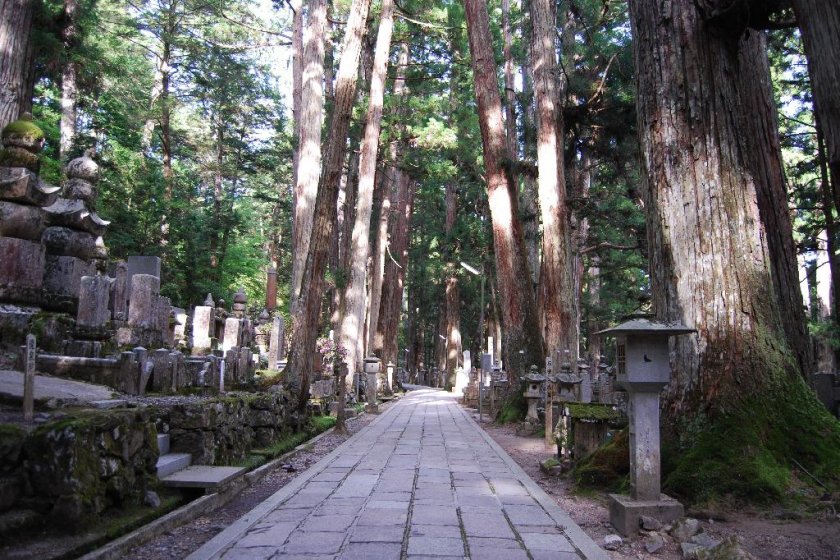 Mt. Koya and the Great Teacher

In Search of a Certain Buddhist Monk Called Kukai

If you are interested in Japanese history and culture, then sooner or later you will come across this Buddhist monk who is posthumously known as Kobo Daishi (“Great Teacher”).

His mausoleum is in Koyasan’s Okunoin (“Inner Sanctuary”). Followers strongly believe that Kukai is still alive and in “eternal meditation” and they come to Okunoin to venerate their Japanese Saint. Join them in their spiritual search, or just soak up the mystical atmosphere of Japan’s largest graveyard.

Kobo Daishi, also known as Kukai, is one of Japan’s most prominent historical figures (774–835).

Not only a monk but also an artist, philosopher and poet, with scientific and engineering ambitions and close relations to Japan’s rulers at the time, Kukai’s multi-faceted personality much resembles the European Renaissance Man in his strive for acquisition of universal wisdom, self-perfections and liberation, which Buddhists would call enlightenment.

Born into an aristocratic family, he studied Chinese classic texts of Confucianism and Taoism in his teens but in his early 20s he became interested in Buddhism, which had just arrived in Japan a few decades before.

He travelled to Tang Dynasty China to seek out a particular Buddhist text and two years later he returned to Japan as a Master in Esoteric Buddhism. His petition to the Emperor at the time, asking for permission to introduce the new faith in Japan, now known as Shingon Buddhism, was granted as was his request to establish a monastery.

The location he chose was an isolated mountain plateau said to be encircled by two mountain chains of eight peaks each. The place was thought to represent a Lotus, an important Buddhist symbol.

This place is now known as Mt. Koya, or Koyasan, and it is a small temple town of 4,500 inhabitants in the still seemingly remote mountains of Japan’s Wakayama Prefecture on the Kii Peninsula. Kukai spent his final years there before he passed away in 835 after having initiated some disciples who continued the teachings of Koyasan Shingon Buddhism.

Their headquarters is Kongobu-ji (“Temple of the Diamond Mountain”) on Koyasan. The Danjo Garan (“Sacred Precinct”), together with the Okunoin the most sacred place on Koyasan, is a compound of twenty temples, halls and pagodas set in a forest of cedar trees.

This is the ground where Kobo Daishi founded his retreat in the early 9th century and where he gave his first lecture. Kobo Daishi’s mausoleum is located in the far corner of the Okunoin, a huge cemetery of some 300,000 tombs in Koyasan, which is set amongst a forest of majestic, centuries-old Japanese cedar trees.

Some tombstones are old and moss-covered while others are spank-new; this is resting place of Kukai’s followers throughout the ages; samurai and feudal lords rest side-by-side with monks and representatives of present-day Japan’s big corporations.

Visitors, pilgrim or not, walk down a two kilometer-long path leading through the whole graveyard and they cross three bridges, each of them bringing them closer to Kobo Daishi, before they reach the Torodo (“Hall of 1,000 Lanterns”).

The ceiling of the hall is covered in lanterns, be it a thousand or not, all donated by worshippers. They shed the otherwise dark hall in some mysterious light. Behind the Torodo is the Gobyo, Kobo-Daishi’s Mausoleum, the “heart of the tradition and faith in Kobo Daishi”.

You will see devotees, deeply sunk into prayer, standing there for a long time. If you feel like having a dialogue with the Saint, then this is the place. 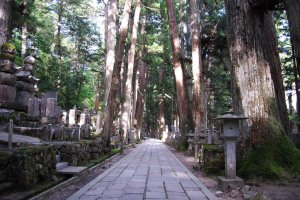 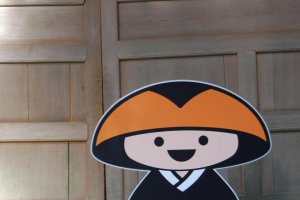 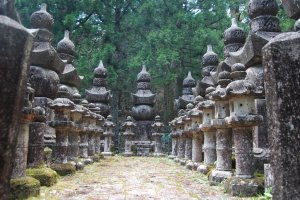