Getting inspired by visiting the Kishu Ishigami Tanabe Ume Orchards

Did you know that plum blossoms were considered more beautiful than cherry blossoms in the Nara Period (710 to 794) of Japanese history? The current fixation on celebrating cherry blossoms began in the Heian Period (794 to 1192).

Ume, originally from China, was introduced in Japan in the 8th century. This is why ume viewing was so popular around that time.

Furthermore, did you know that umeboshi, the salty sour pickled ume, is considered a superfood? There is an old medical text, written 1,000 years ago, that already mentions the use of umeboshi, the pickled plum, as a medicine.

It is assumed that the knowledge about the umeboshi’s medicinal properties came from China where ubai, a dried smoked plum, had been used to reduce fevers, help to control coughs and to counteract nausea.

The white flowers greatly inspired Japanese nobility at the time who eternalized them in poetry and art. There are poems about ume throughout the whole Manyoshu, the Collection of Ten Thousand Leaves, Japan’s oldest poetry collection. It was published in the 8th century. Imagine, over 100 poems about ume alone!

Our current era name, Reiwa (“Beautiful Harmony”) was inspired by an ume poem in the Manyoshu. In fact, the two Chinese characters that make up the name Reiwa were taken from words in this poem.

The poem is to be found in the section called “Thirty Two Poems on Plum Blossoms”. Here is the poem for you:

It was in new spring, in a fair month,

When the air was clear and the wind a gentle breeze.

And the fragrance of the orchids was their sweet perfume.

Healthy Plum for Daily Use

While the blossoms left their imprints on people’s artistic mind, the fruits have made it into their bellies. Ume has found its way into Japanese cuisine and in folk medicine for its nutritional and its healing properties for centuries.

The most common medicinal usage now is as umeboshi (ume pickled in salt).

Umeboshi has an alkalinizing effect on the body. In times, when our body’s pH balance is of often disturbed and on the sour end of the pH scale, eating foods that bring our body back into balance is important. Eating umeboshi does the trick!

In addition, umeboshi is also able to neutralize fatigue and stimulates digestion. Well, just the thought of putting one of these salty sour plums in my month makes me wide awake, and once eating, my stomach starts rumbling.

Eating umeboshi might also help to regulate sugar metabolism, help the eliminate toxins and to process excess alcohol. Have you heard the rumor that eating umeboshi is the best hangover cure?

In the Japanese way, you start your day with umeboshi, as part of a healthy traditional breakfast, and you finish the day with a sip of sweet umeshu before dinner. Well, consuming umeshu excessively (easier done than you might think!) might actually undo all the good that comes from eating umeboshi.

In any case, safe your aspirin and your apple, and have some umeboshi instead. As the saying goes: “an ume a day, keeps the doctor away”.

If you want to visit an ume orchard, then make your way to Tanabe in the south of Wakayama Prefecture. At the Kishu Ishigami Tanabe Ume Orchards near Tanabe more than 300,000 ume trees cover the hillsides that stretch out right to the Pacific Ocean in the distance.

Kii-Tanabe can be reached by JR Kuroshio Train from Kyoto, Shin-Osaka and Tennoji. The Tanabe Tourism Office, located right next to Tanabe Station, provides detailed information.

Usually, a 2.5 hour Charter Taxi/Jumbo Taxi Tour to the Kishu Ishigami Tanabe Plum Orchards is available. You can book at the Tanabe Tourism Office. 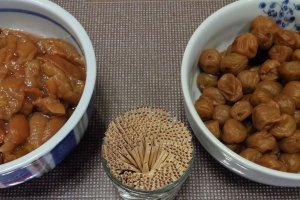