Kōzan-ji in Tanabe holds the grave of Aikido's founder

It seems puzzling, a self-defence strategy that doesn’t go for the jugular. But this is Aikido, the way of harmonious spirit, which topples all my preconceptions of what fighting an enemy is, formed mainly of course by the movies. With Aikido, one actually takes as much care as we would ourselves that not one hair of the attacker’s head is harmed. This peaceful martial art first drew believers because its creator, Morihei Ueshiba, despite his small size, defeated many who should have known better. His ashes are buried at Kōzan-ji Temple in Tanabe, and there is no better place for the temple, with its glades and garden, is a true sanctuary for the heart.

Kōzan-ji is situated at the town’s edge by a waterway which can be followed right around Tanabe’s seafront, a circle of tranquil scenic walking. Kōzan-ji is set against a mountain, which filled me with anticipation as I approached, because I could only see the impressive gateway and a peep of the stone staircase against lots of mountain. I entered through this old stone staircase wreathed in green foliage, and guarded by a dramatic demon pair of Niomons. The place was thick with silence and the fragrance of green. On the way up, I had to keep stopping to just take it all in, the lines of juzo and the statues, all framed by dangling leafy branches. At the temple itself, rocks and boulders strewn around were the backdrop to more juzo and the temple buildings created a dark and sombre contrast with the bright red leaves of autumn, not forgetting water lily ponds, too. I’m positive Ueshiba lies there happy.

He must have been a unique sort of chap to come up with a martial art that seemingly defies reason, that it is possible to defeat an enemy who intends you harm, even death, by redirecting aggressive energy outwards, manifest physically in a ballet of throws, thrusts, and arm locks. No guns ablazing, lethal kicks, deadly blows, just harmony of mind, body, and spirit melding together. Despite sounding impossible, its intriguing philosophy has resulted in Aikido schools set up all over the world. Many of his followers are foreigners who continue to visit his grave at Kōzan-ji.

Kōzan-ji is among Tanabe’s many distinctive temples, all part of the Kumano Kodo. It is perhaps not as famous as the big three, the Hongu Taisha, Hayatama Taisha, and Nachi Taisha. For sure, no hordes were beating a track to it. But I was taken up by it. It had a big compound, but everything seemed simple and untouched, yet with lots to see discovered as you walk deeper into the complex and exploring around the corners  including a black and white pagoda, making it a bounty of picture scenes for photographers.

One of its temples was red lacquered, plopped in the middle of a Japanese maple leaf garden and pond, and this was bordered by a thick forest trail. Historical ambience was augmented by the statues and stones eroded by time. Kōzan-ji of course has also the honor of being the resting place of the founder of Aikido. Perhaps his gentle spirit permeates the place, for peace is what Kōzan-ji generates through its quiet beauty. 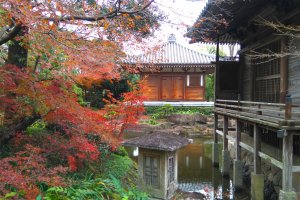 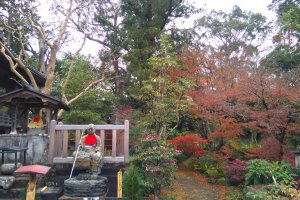 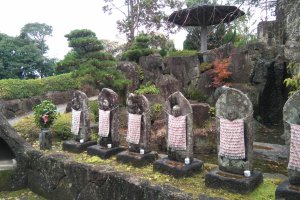 Jihad Mahmoud 2 years ago
Thank you for sharing.
Reply Show all 0 replies