In search of satsuma mandarins and the people who grow them

Eating tons of juicy sweet mikan, or satsuma mandarins, in winter in Japan is a given.

Did you know then that Wakayama Prefecture is the largest producer of mikan in Japan? Well, it is not the only one because mikan and other citrus fruits are also grown in Ehime, Nagasaki and Shizuoka Prefectures.

We wanted to know more about where and how mikan are grown and since we live in Wakayama Prefecture, our investigation started on our doorsteps. There are actually two major areas with mikan orchards in Wakayama: one is the Tanabe area, also famous for ume (Japanese plum) and another is the Arida area, where we visit today.

The Arida area is located south of Wakayama City in Wakayama Prefecture. Arida is not usually a destination for visitors from abroad and most Japanese visitors just pass through here on their way south to Shirahama beach and to the diving paradise of Kushimoto.

A road follows Arida River from its mouth at the Pacific Ocean into a valley and when you follow this Road 480, it will take you all the way to the top of Mount Koya and from there back down and to the outskirts of Osaka. This seemed an interesting option for a road trip by car.

But first of all I wanted to visit the mikan orchards that I had seen many times when I travelled by Kuroshio train. They are located in the Miyahara area of Arida. This is where I was heading.

I had an appointment with Mr. Yasuo Oura, the Managing Director of the Sales Division at Sowakajuen, a company that is involved in the mikan business.

So-Wa-Ka-Ju-En (早和果樹園) translates as “early Japanese fruits tree garden”, or in other words “old Japanese orchard”. In fact some of their orchards are already 450 years old.

We met at the Sowakajuen showroom located in the rural and very quiet Miyahara area of Arida where Mr. Oura explained the history of the satsuma mandarin. Then he took us to the orchards and we traveled as the farmers do, by K-truck, the car of choice of Japanese farmers.

It was interesting to hear that at Sowakajuen they produce three types of mikan juices with different levels of sweetness. He explained that their customers in China and Hongkong prefer a sweet juice, customers in Europe and in Japan like it less sweet, and the French are somewhere in the middle.

Employees at Sowakajuen check the level of sweetness of the mikan, together with their size, by sensor now. The sensor is built into a conveyor belt that divides the mikan in three groups. Then the skin is peeled by people and the fruits are crushed by the machine as a whole to get all the liquid, as well as pieces of fruits.

They have a large production hall at Sowakajuen and employ 60 full-time staff. In harvest season, however, an additional 80 casual staff help with picking and peeling the fruits. The fresh fruits are harvested and sold from November until January. During other months of the year mikan products, such as mikan juice, jelly and smoothies, are made here.

Sowakajuen's line up of mikan products is impressive. Having said that, I still prefer eating the fresh mikan. My second choice is their 100% mikan juice. I have not tried the mikan spray for the face yet but it looks interesting.

All mikan cultivated here are varieties of Unshu mkan (Citrus unshiu) which are typically a sweet, semi-seedless and easy to peel type of citrus fruit. Unshu mikan originated in Unsyu, China but only after the fruit was grown in Japan did it become famous. Nowadays there are 100 varieties of Unshu mikan that can be harvested almost throughout the year.

The mikan’s Japanese origin can be traced back to the early days of the Edo period when the Tokugawa Shogun ruled feudal Japan. One branch of the Tokugawa family was based in what is now Wakayama City. The impressive Wakayama Castle, demonstrating their power, is still located in the center of modern Wakayama. They ruled over most of what is now Wakayama Prefecture and southern Mie Prefecture on the Kii Peninsula, which was then called Kiishu, the Province of Kii.

The Kiishu Tokugawa daimyo recognized the potential of the Unshu mikan and he decided to grow and cultivate mikan trees. The first orchards were build. The Wakayama samurai did not just eat all the harvested mikan themselves but they carried them to the Edo capital and sold them there. This brought them a nice income stream and made their mandarins famous as the "Kishu Arida Mikan".

The ocean-facing hills in the Miyahara district of Arida City have the ideal micro climate to grow citrus fruits. The sweetness of the Unshu mikan comes from a lack of water on the terraced fields so that the citrus trees channel all their juice into the fruits.

There is now an area of 2,000 ha that is covered with orchards. Each orchard is quite small but the combined number of orchards stretches out over the hills around Miyahara district. Small as the orchards may be but on a 0.5 ha orchard on the slopes of the Miyahara hills there are 800 trees.

These hills are about 500 meters high and the orchards are called ‘dandan batake’ because they look like steps on the hill from afar. It takes ten years for a mikan tree to carry fruits and a fruit tree in these orchards has a life span of 30 to 40 years to be productive.

In the old days the farmers had to carry the fruits down in baskets hung on a shoulder pole. Now there are roads, as narrow as they might be, winding their way up and down the orchards and farmers can transport the fruits down by K-truck. They also have monorails to carry fruits down to the road.

Most farmers here still use fertilizer which they give to the trees in summer. The organic mikan is a relatively new market, but it is growing. In autumn the harvesting of mikan is done by cutting the fruits from the tree one by one with a scissor. One person can harvest 200 kg of mikan in half a day. Assuming a weight of 100 g per fruit, this comes to 2,000 fruits.

Mr. Oura is not only an employee at Sowakajuen but he is also proud of being a member of one of the mikan farming families here. 2,000 families are active in the mikan orchard business.

One family is in the mikan growing business for 32 generations now whereas for another families, such as Mr. Oura’s family, it is ‘just’ the fifth generation. Both families’ business roots reach back to the Edo period.

About 50% of the mikan orchards in Arida are owned in small plots by one family each, and the remaining 50% of orchards are owned collectively by a cooperative. This is the “Kishu Arida Mikan” community, a community that has lived and worked together for centuries.

The future of this community, however, looks bleak. There is a generation problem, says Mr. Oura. Most of the mikan farmers are already elderly now. Another ten years down the line and they will not be able to continue this heavy work.

There are not enough young people who are interested in working on the orchards, what to do? City dwellers in Tokyo, Osaka and elsewhere are blissfully unaware of the farmers’ worries, Mr. Oura laments, as long as the tasty sweet citrus fruits are available in the shops in winter.

I could not offer a solution for this problem but I promised to write about Miyahara’s mikan farmers. May the recent revitalization efforts of rural Japan bear some fruits and bring young people here!

For the time being, frequent prayers at Kitsumoto Jinja, the “Mikan Shrine” in the Shimotsu area of nearby Kainan might help.

Take the JR Kuroshio train from Kyoto, Shin-Osaka or Tennoji in Osaka to Wakayama City and change to a local JR train that takes you to Kii-Miyahara train station. Sowakajuen is in walking distance from the train station. 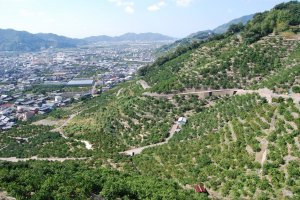 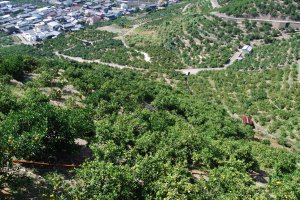 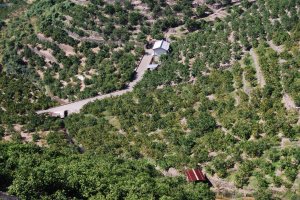 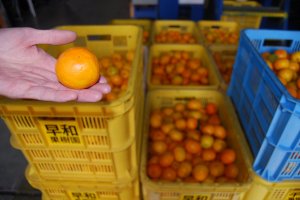 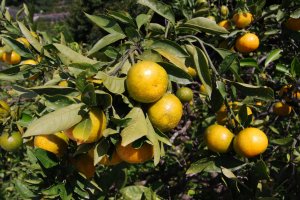 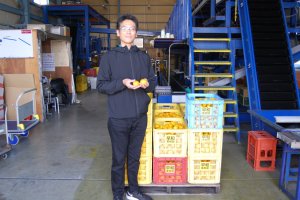 Bonson Lam a year ago
The name Satsuma is so evocative of food from Tonkatsu to shichido. Now I am adding mandarins to this list.
Reply Show all 0 replies
1 comment in total