Near the border of Yamagata prefecture and Miyagi prefecture sits a small town called Yamadera. The town is small and out of the way from any major cities or roads, but therein lies its own uniqueness. The characters “yama (山)” and “tera(寺)” translate to “mountain temple”, and that is exactly what this place is. From the foot of the mountain, until you reach the main temple Risshakuji, there are many temples, shrines, graves, and halls that line the path when you climb the mountain. Risshakuji was originally created in 860, but was destroyed in the early 1500s and then rebuilt in 1554.

Near the foot is a place called “The Turtle’s Back (Shell)”. It is a place with great spiritual power and very interesting I might add. There is what seems to be a flat stone sticking out of the ground in a circular shape much like that of a turtle’s shell. Now according to the legend, you are supposed to throw a coin onto the rock. (There was no specification as to how much, but there were a lot of 10 yen coins.) If the coin lands on the rock, it is supposed to bring you longevity.

Now the temples are all accessible year round, so you don’t have to worry about coming in a certain season to see the temples. However with that said, Yamagata Prefecture’s winter is not mild by no means and does get snow in large quantities. Some of the stairs even turn to ice from the constant traffic and compacted snow. (I found that out Feb 2014, I wouldn’t recommend western boots either.) There are plenty of walkways near the top, but some don’t have handrails with very steep cliffs.

When fog descends over the mountain it can give an eerie or mystical view. A lot of Japanese folklore revolving around ghosts, shapeshifters, demons, and monsters have a common troupe. Japanese stories of the supernatural tend, to begin with, creatures coming out of or appearing in the fog. What makes it even more interesting is the fact that there was a funeral ceremony in progress at Risshakuji (the main temple).

Not recommended for children under 5 years old.

They also have a 20% discount for groups of more than 30 people. (Does not count towards 100 yen tickets.)

If you are a little unsure, don’t worry. You can use the video below to help you and give you a little insight.

Yamadera is definitely an adventure, and one that I would recommend that you visit while in Tohoku. Just remember that it is “Hard Mode” in winter. It is equally beautiful in summer and autumn.

For those traveling by train, it’s a little more simple. Get your ticket at Sendai Station for 840 yen. Then get on the Senzan Line(仙山線) on track 7 or 8 and take the train all the way to Yamadera Station. It’s about 1 hour and 15 minutes.

Find out more about Yamadera Temple. 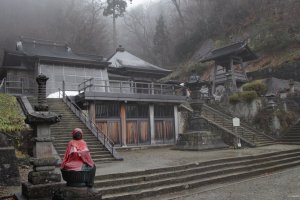 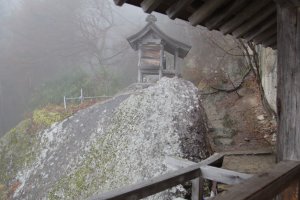 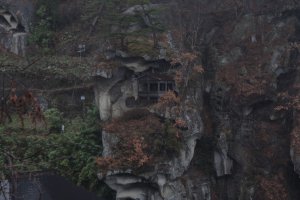 Amanda Ho 5 years ago
Hi Brian, do you know if there is public transport on 31st night? There seems to be a light up event to welcome the new year, but nothing is written on transport after the event on their websites.
Reply Show all 0 replies

Elena Lisina 5 years ago
It looks like a chellenge, indeed! I'd prefer autumn rather than winter climb! :) Well done!
Reply Show all 0 replies

Relinda Puspita 6 years ago
No snow?
Reply Show all 1 replies

Brian Takahashi Author 6 years ago
If you look up near the Entrance of Risshakuji, there is a pile of runoff snow. If you want lots of snow, I recommend going at the end of January to mid February.
Reply

Justin Velgus 6 years ago
So, I want to try "HARD MODE" challenge, I think!
Reply Show all 1 replies

Brian Takahashi Author 6 years ago
You should, but go in groups or with a buddy. I was lucky to have one when I went. We kept each other from slipping.
Reply
6 comments in total