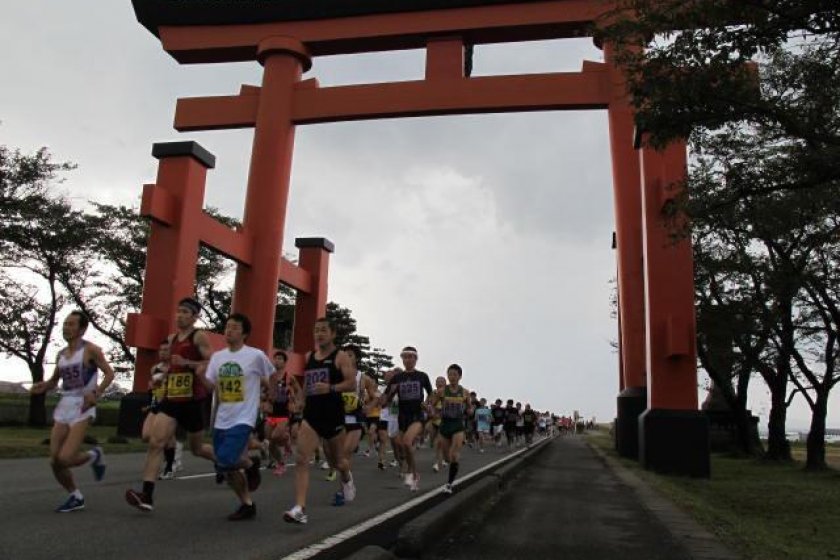 A unique way to climb the mountain

Mount Haguro in Yamagata Prefecture has always been known as a popular spot for hikers. But come mid-October, the lowest of the Dewa Sanzan mountains (“The Three Mountains of Dewa,” i.e. Mount Haguro, Mount Gassan and Mount Yudono) attracts those seeking to ascend it in a slightly different manner.

Held yearly since 2001, the Ishidan Marathon brings more than 300 competitors to Haguro, the village named after Mount Haguro.

At first glance, the village’s most popular annual event seems not too dissimilar from other popular Japanese races. Sure, the opening ceremony in the Haguro High School gymnasium—where all the runners gather to obtain bib numbers—features horagai-blowing yamabushi (mountain ascetics) and competitors start roughly 50 meters from the village’s huge red torii. But as crowds cram the Toge section of Haguro—home to several shops and family-run restaurants—to cheer on the competitors, the Ishidan Marathon seems just like any other race in Japan.

That is, until the second half of the race beckons. The first three kilometers are run up an incline, but those who have trained adequately for it shouldn’t be too fazed. However, just after passing a group of youngsters playing taiko near the Ideha Cultural Museum, the real fun starts.

Because the runners are about to enter the woods of Mount Haguro and tackle its 2,446 stone steps, which the event is named after (Ishidan means “stone steps”). Tiring enough for those slowly walking up the mountain, the slippery steps—which are totally not conducive for running—render most of the already-tired runners walkers. So the race becomes—for many—an exercise in willing themselves across the finish line without falling.

When competitors do stumble across the finish line, which is in the vicinity of several gift shops, they are rewarded with the customary post-race snacks: onigiri, sports drink, and something else: soup made by several lovely obasan, including my landlord’s wife.

After refueling, most runners would locate their clothes, complete a recommended cool-down and bounce a.s.a.p.—except that being on the summit of Mount Haguro makes a quick departure impossible. But they need not despair as the Ishidan Marathon experience is far from over—organizers then shoo the finishers into the nearby Dewa Sanzan Historical Museum, where the athletes can enjoy the race highlights on a projector…if they’re not mortified by how out-of-shape they appear.

Next up is the closing ceremony, during which the top finishers in each age group receive a price or two—but not something that goes around their necks. Instead, the top three finishers in each age group receive, at least, one five-kilogram bag of rice, while the top five overall male and female finishers are presented with a wooden plaque commemorating their accomplishment on which their names are inscribed.

Only one question then remains…how the hell do all the athletes get back to Haguro High School? There’s no way they can walk back down Mount Haguro. Fortunately, they don’t have to. In the parking lot near the Dewa Sanzan Historical Museum, two buses are ready to take the runners back to the high school. Pretty cool way to end a unique race.

This race takes place in October each year. Strictly speaking, it is not a marathon as it is much shorter. There are two ways to participate:

There is a participation fee. Registration takes place in July and August.

More information (in Japanese) and photos of past races can be found on the Dewa Shokokai website. 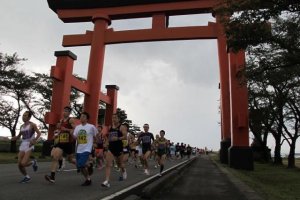 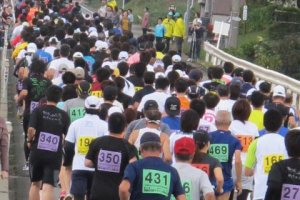 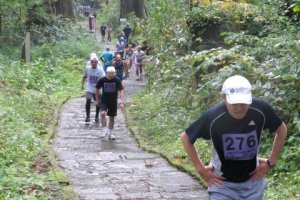 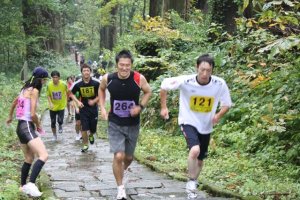 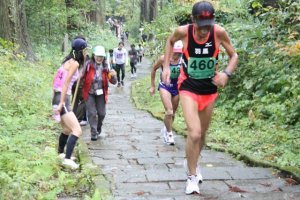 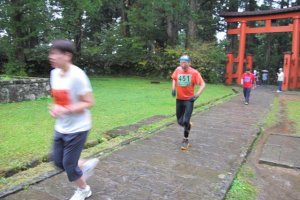 Selena Hoy 9 years ago
Your marathon stories are great! I'm really interested in events like this.
Reply Show all 1 replies

Rashaad Jorden Author 7 years ago
I hope you've had the opportunity to participate in a race in Japan. I'm sure many of them have their own unique touches.
Reply
2 comments in total