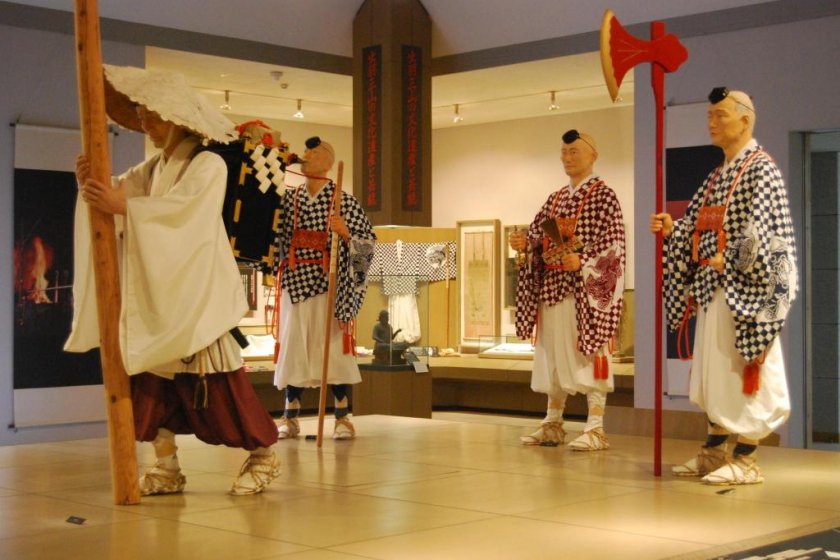 The spiritual practice of mountain treks

Display at the Ideha Cultural Museum. Here you can learn about the tradition of Haguro Shugendo.

Shugendo (literally the “way of testing and training”) is a “mountain religion unique to Japan”. Practitioners are referred to as shugenja, or are colloquially called yamabushi (“one who lies in the mountains”).

Their spiritual practice consists of mountain treks during which they perform certain religious rituals.

One of the main centers where Shugendo is practiced is the Dewa Sanzan area. I went on a yamabushi expedition to Dewa Sanzan to find out more about this esoteric tradition.

Anticipation built up as the local bus from Tsuruoka, an old castle town at the shores of the Sea of Japan, passed through a huge red-lacquered, four-legged torii gate at the foot of Mt. Haguro. In the small village of Toge the bus stopped right in front of Ko-gane-do temple.

Hundreds of worn straw sandals, the traditional footwear of pilgrims, hang from its gate. This temple is actually the start and end point of one of Haguro Shugendo’s main ritual, called the Autumn Peak, a religious “mountain entry” practice. What an inspiring welcome to anyone who intends to walk across the three peaks of Dewa Sanzan-Mount Haguro, Mount Gassan and Mount Yudono-searching for something not quite known.

Upon passing Zuishin-mon gate and descending into a valley, I soon reached a red-lacquered bridge across a creek and a nearby shrine set in front of a small waterfall. Pilgrims pay their respect to the deities while sightseers take some snapshots before they continue to follow a stone path flanked by 300 year old cedar trees.

This mysterious 1.8km long avenue was constructed over a period of thirteen years in the 17th century and it constitutes the front approach to Mt. Haguro’s temple and shrine complex on top of the mountain.

The tall old trees and the weathered stone path walked by tens of thousands of pilgrims made me feel little and humble in the fastness of time and space. The trail is first leading to the Haguro Five-Storied Pagoda (Go-Jyu-No-To), which is even older than the path and the trees.

This grand wood-only structure dates from 1372 and it is classified as a National Treasure. Rays of sunlight found their way through the crowns of the tall trees and they illuminated the old pagoda in a golden light.

Traditionally pilgrims start their journey at Mt. Haguro. Then they continue to Mt. Gassan before reaching Mt. Yudono, the most sacred of the three mountains. It is believed that this follows the route of birth, death and rebirth of Buddhist cosmology.

The latter two mountains are covered in snow and are not accessible in winter. Hence, the deities of all three mountains can be worshipped at the Sanji-Gosaiden Shrine, on Mt. Haguro, which is accessible year-round.

In the old days pilgrims would continue their journey from Mt. Haguro to Mt. Gassan on foot following a pilgrim’s trail through three plains and three marshlands. I asked the locals about this but was informed that no one walks this stretch anymore. Instead a local bus now connects the two and so I got on the bus.

A small country road winds its way through a landscape of rolling hills before it climbs up to the eighth stage of Mt. Gassan, a parking and rest area, from where pilgrims and hikers walk to the small, weather-beaten shrine tucked away on the mountain slopes of Gassan.

A purification ritual conducted by a Shinto priest is necessary or else one is not allowed to enter the shrine. I copied some pilgrims bowing their heads in unison and the priest muttered a prayer while swirling around a long pole topped with strips of white paper, commonly seen in Shinto rituals.

Then he handed over a small piece of paper in the shape of a human body to each of us and we were asked to rub it against our chest, arms and legs and then drop it into a water basin. It is said that this piece of paper is sacred and the part of the body that you have rubbed it with will be cured from all illnesses which float away in a river symbolized by the water basin.

I continued my journey along a ridge towards the peak of Mt. Yudono. Although it was mid-summer, amazingly I saw large patches of snow and ice on the shady side of the mountain while the sunny slopes on the other side were covered in lush green scenery.

This is a surreal landscape of partly summer and partly winter; if one is not in-between worlds but definitely in-between seasons here. Some people admired the colorful alpine flora while others brought a sledge to slide down the snowy slopes. On Mount Gassan skiing is possible even in summer!

A fork in the trail leads to the Mt. Gassan Chairlift but I continued my journey to Yudono Shrine, which is actually not on the peak of Mount Yudono but in a valley. The path became increasingly narrow and it did not seem walked much.

When it becomes steep and steeper leading down the valley, steel leaders and chains are fixed to the rocks to aid brave travelers. At some point the small path merged with the flow of a creek and it became all slippery rocks and flowing water. If this mountain stands for re-birth, then it makes sure that it is not an easy one.

Once the bottom of the valley was reached, Yudono Shrine was not far. It is the holiest of all three shrines of Dewa Sanzan and pilgrims and other visitors must take off their shoes and socks and enter barefoot. This is not your usual shrine but this is all that I am allowed to say. Photography is strictly forbidden as is talking about what one has seen and experienced there.

A short walk downhill and another big torii gate marked the exit from the sacred precinct of the mountain deities and the end of my spiritual journey. When looking back towards this big gate, which itself is thwarted by the tall mountain peaks in the background, a sense of happiness and accomplishment set in.

The power of nature brought some lightness to the mind and, despite the aching legs, the body felt invigorated-on other words, it just felt like being “re-born”. 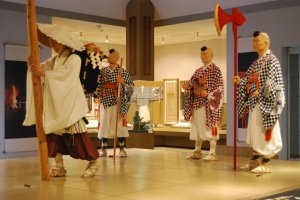 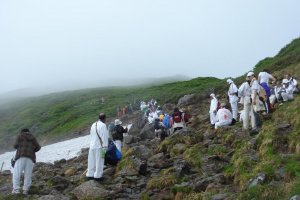 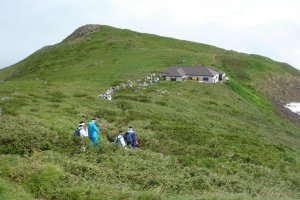 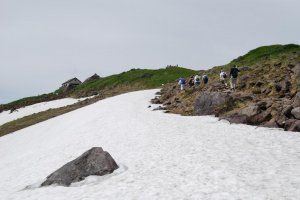 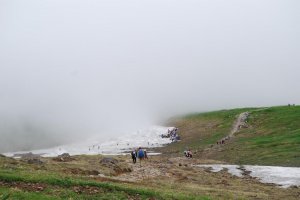 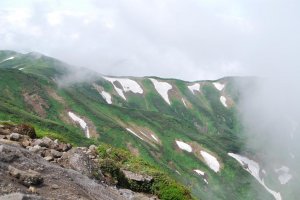 Alena Eckelmann Author 3 weeks ago
Yamabushi tours are the latest trend it seems but for a glimpse into the tradition one does not need to splash out much. Inform yourself at the museum in Toge Village, then go across the road and walk up Mount Haguro. Then take the bus to Gassan, stay in the mountain hut one night, and the next day walk across the mountains to Yudono-san. If you have done some walking in the Japanese mountains, then you will find your way without a guide.
Reply Show all 0 replies