The Road to Hagi Yaki

The city of Hagi in Yamaguchi Prefecture is so important to the world of Japanese pottery that it has its very own style. Hagi ware, or Hagi yaki, is a style molded with particular aesthetics in mind. Hagi yaki favors the subtle and subdued over bright and flashy. Traditionally, throughout Japan, styles of pottery that carry earthy tones and kannyu crack patterns have been those considered most beautiful.

Much of the above has to do with contrast. Consider the bright and vibrant green of matcha up against the warm neutral tones of the vessel from which it is consumed. For many years, it’s the pottery craftsmen of Hagi who have been included among the very best in the country for their vision and ability to bring this aesthetic ideal to life.

Those who have spent some time admiring and taking part in the traditional Japanese tea ceremony, an art in its own right, have long been familiar with Hagi yaki. In fact, the two have certainly influenced one another. The kannyu patterns, while adding an antique-like visual, actually serve a more salient purpose. The fine cracks, or crazing, are achieved once a glaze has been added and the piece is fired for a second time. By firing the pottery and slowly lowering the heat, the glaze shrinks more than the clay and the kannyu are formed. With use over time, the cracks absorb the tea put into it which changes the color, thereby creating a constantly evolving piece of art not only influenced by the original artist but by those who take part in a tea ceremony.

The history of Hagi yaki

Hagi’s history with the art of pottery can be traced to the 16th Century when the Japanese military occupied the Korean Peninsula. Caught up within the throes of this tumultuous and transformative time, many Korean pottery artisans found themselves in Japan. The quiet coastal town of Hagi on the Japan Sea became home to a host of such people, whether by choice or not. And so, their strong influence on what would come to be known as hagi yaki began.

In addition to being responsible for building Hiroshima Castle and thereby founding that city, feudal lord Mōri Terumoto, then head of the famous Mori Clan, had Hagi Castle built in 1604, as well as participating heavily in the Korean Campaign. It just so happened that Terumoto was a big fan of the burgeoning style of pottery and ordered it made, not only for his own personal tea ceremonies and such but as gifts to give.

The production of Hagi ware was in trouble during the Meiji Restoration of 1868; however, in the mid-1900s, new kilns were added due to the rebirth of tea ceremony culture after World War II. More than 100 kilns still exist today.

The creation of Hagi ware

A lot more than two firing processes go into creating a finished piece of Hagi ware. In fact, Hagi yaki is known for the pottery having a soft feel to it and is called tsuchi aji in Japanese, or earth feel.

Overall, there are three types of soil used in each piece of Hagi yaki and the combination of the earth varies from piece to piece depending on the desired outcome of the finished product.

Once the piece has been kneaded, molded, and formed glaze plays an important part of its final visual as well. There are two types of Hagi yaki glazes.

Where can I find Hagi ware?

Visitors to Hagi can find historical examples of the art along with those for sale as souvenirs. There are even opportunities to make your very own pieces of Hagi ware. Below are just some of the places where you can discover, interact with, and create Hagi yaki.

The Hagi Uragami Museum is named for Hagi-born entrepreneur, Toshiro Uragami, and opened in 1996. Uragami’s truly impressive collection on display originally included several hundred pottery works by revered local artists, a few hundred more by Korean and Chinese pottery makers, and an extensive collection of ukiyo-e (woodblock prints and paintings which became popular during the Edo Period) also by a variety of famous ukiyo-e artists.

In 2010, Uragami’s collection was expanded upon to include more ceramics, covering the city’s four-century history with the art which bears its name. So impressive is the museum that the Michelin Green Guide Japan named it a two-star tourist attraction in 2009. This makes it not only the highest-ranked tourist attraction in Yamaguchi Prefecture but also a must-visit for pottery enthusiasts.

When is it open? 9am to 5pm, last entry at 4:30pm, closed on Mondays (except holidays) and New Year holidays

To gain a new appreciation for the craft and especially the white Hagi glaze developed by the Kyusetsu family, a visit to Fusoan Miwagama Kiln is simply a must. At this gallery and museum, guests can see expertly crafted pieces ranging from vases, tea bowls, and water containers, as well as visit the kilns to see where these masterpieces are created; please note, during Covid-19, the gallery is closed for a while.

When is it open? 10 am to 4 pm, closed on special holidays, Mondays, and Tuesdays.

Now under the leadership of the 8th generation, Seiunzan Okadagama Kiln has perfected the art of Hagi yaki and blended it seamlessly with modern visions. The current head and award-winning master, Okada Yuu, has created techniques unlike any seen before—including ensai, which sprays soil onto the piece in a pattern.

Here’s where you can become a Hagi yaki artisan in your own right! It’s both a family-run pottery school and a souvenir shop. Perusing said shop you may notice a couple of distinct styles on display for sale. Both father and son are acclaimed Hagi ware makers and each have their own approach. In a modern world of machine-made monotony, it really is both heartwarming and fascinating to stumble upon pieces so carefully and organically-crafted as a father-and-son Hagi ware shop. Kaneko senior has more than forty years’ experience and both he and his son have been exhibited internationally.

Language need not be a barrier in creating wordless art. Visitors are helped to fashion three types of art: rokuro, tebineri, and etsuke.

Rokuro refers to the potter’s wheel. As such, your creation will be something round like a bowl or plate. You may not be quite on the skill level of the Kaneko boys but you can be assured that the experience is a thoroughly satisfying one nonetheless.

Tebineri means that the wheel is pushed aside in favor of the primal beauty of the human hand. Although less dynamic, tebineri affords the challenge of taking a piece of clay and molding it into something you created with nothing but your hands. Again, a rewarding experience and one during which visitors can make something into a rectangular or square shape if they choose.

Etsuke is decorating ceramics. Visitors choose a piece they’d like to decorate, generally choosing between black ink or a beautiful earthy red. The imagination is the only roof on creativity aside from the size of the ceramic canvas. Once more, creating something that will last a lifetime is deeply gratifying.

A visit to Jozan Pottery Studio and making a few things is an art-meets-functionality experience we’re not often given--a must-do while in Hagi, especially for those with an interest in pottery.

How much is it? ¥1050+; Of course, the exact cost will depend upon what exactly you choose to make and group discounts are available to groups of more than 20 people. Also, as your pieces will be mailed to you, postage will vary accordingly.

Visitors will find pieces made by famous established artists and relative up-and-comers alike, in addition to other works made from such as glasswork, metalwork, and porcelain. Onsite is Saitoan Loft which sells a host of other traditional Japanese products. 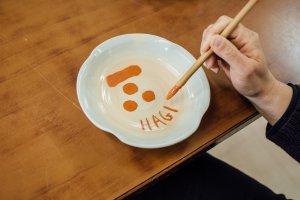 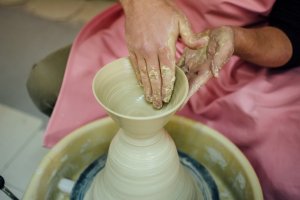 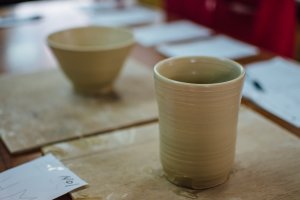 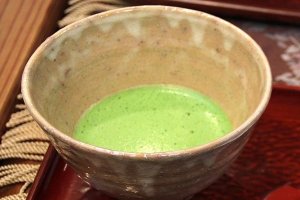 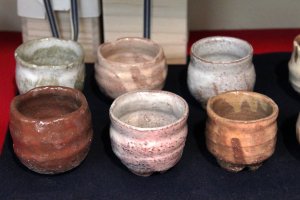 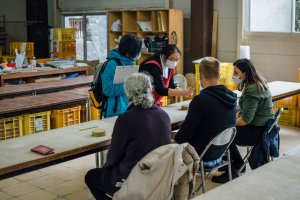 Novia Mardasari a year ago
I want to make it, one day
Reply Show all 0 replies

Bonson Lam 2 years ago
Great insights on the different kinds of soil used in making porcelain. I did not know that.
Reply Show all 1 replies

Sleiman Azizi 2 years ago
I wouldn't have a clue as to the details but the fact that different areas with their different soils influence the final product in different ways is a story in itself.
Reply

Kim 2 years ago
I really liked how you described the beauty of the earthy tones when contrasted with the bright, vivid green matcha. I can see how the two work well together!
Reply Show all 0 replies
4 comments in total