Images of Cows and Bulls in Japan

On my most recent trip to Japan at Fujisan Hongu Sengen Taisha I came across various images of cows. While taking photos of them I thought that images of cows are quite rare in Japan - more often there are guardians such as komainu (dogs) or kitsune (foxes). I recalled a few more images from Sendai's Tsutsujigaoka Tenmangu Shrine, for example, and decided to explore the theme of cows and bulls.

Unlike India, a cow wasn’t seen as a sacred animal in Japan, but until the end of the 19th century the Japanese didn’t eat beef or any other animal meat for 1200 years. Before the 6th century, wild deer and boar meats were popular, but with spreading of Buddhism it was forbidden. This was due to the Buddhist belief that humans can be reborn as animals and as such, each life must be respected. That belief didn’t include fish and poultry though.

Religion wasn't the only reason for avoiding meat -- livestock breeding was difficult or impossible in many regions across Japan, especially in the mountains. Change eventually came during the Meiji Period (from 1868) when the Emperor ate beef, and for that reason faced a big rebellion from the Buddhist monks.

As I’ve mentioned before, images of cows and bulls are rare in Japanese temples and shrines. But there is one region where they are quite popular – Aizu. There, you can find a very famous image of a red cow called ‘Akabeko’. The birthplace of akabeko is Enzoji Temple, located in the small town of Yanaizu. Enzoji Temple is believed to be 1200 years old. At the entrance there are statues of red bulls made of stone and metal that, according to legend, helped in building the temple by carrying heavy stones uphill.

Akabeko in Japanese means ‘red bull’ (aka – red, and beko – a bull in local dialect) and they have ties to another legend. About 1000 years ago, akabeko are said to have saved the region from the smallpox epidemic. In fact, from the 18th Century smallpox was treated with vaccinations of cowpox, so the old legend was true! These days, akabeko are famous and popular souvenirs from Aizu and the broader Fukushima area. They are made of papier-mâché and depict a red bull with spots, a sign of recovery from the disease. The akabeko souvenirs have funny swinging heads, and people buy them as an amulet to protect children from diseases. 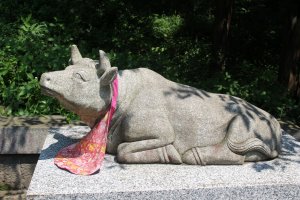 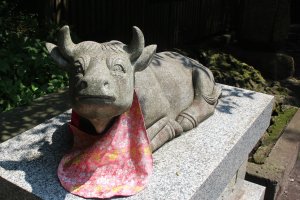 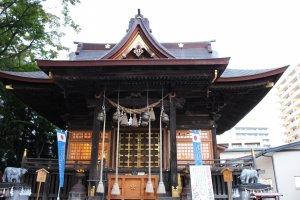 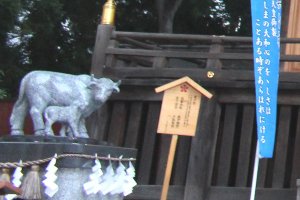 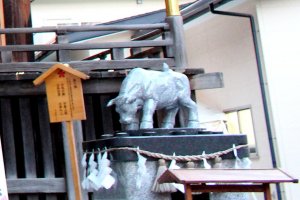 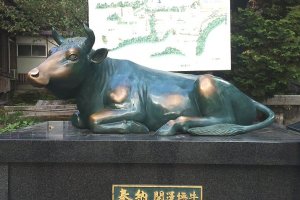