Heading back to our accommodation after sightseeing at the incredible Fukuroda Falls in Ibaraki Prefecture and dining at a local noodle restaurant, I spied a small street stall selling what appeared to be, well, I wasn't sure but it looked interesting. Sauntering over I asked the gentleman behind the counter what he was selling. Well, low and behold, he tells me he is selling inago, or locusts.

I had to have some. I had been waiting years to try some inago. I know they are eaten in places like Nagano and Gunma but alas, these insects had eluded me for far too long and so I quickly picked up a packet of them. I confirmed with the stall attendant that they could be eaten as is and chuckling as he said so, he assured me that no further preparation was necessary. No doubt he had been asked similar questions before...

To put it simply, they were great. Very sweet but that was because of the cooking method. Known as inago no tsukudani, the locusts are kept for a day or so, so that anything it ate, well, removes itself... They are then boiled before being simmered or fried in a soy sauce and sweet mirin mixture. The result is slightly crunchy but with quite a sweet taste.

Usually eaten with rice, inago were a useful source of protein for folk back in the old, old days. Apparently on par with chicken for protein content but higher in fat, inago must have served the people of Japan's inland mountain ranges well.

As for me, I simply nibbled on mine as if they were a snack. Despite not tasting in the least bit 'insecty' I wasn't able to convince anyone in my family to try any. Too bad for them and as they say, more for me. 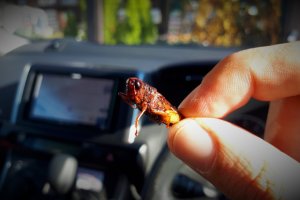 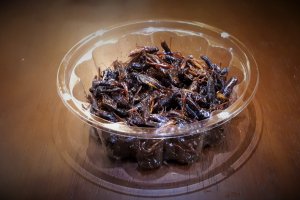 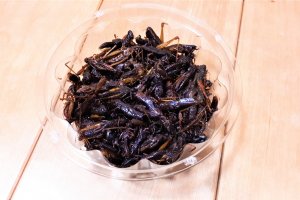 Cathy Cawood a month ago
When I was still in NZ, we had a home tay student from Nagano who brought some inago as a souvenir. I thought they tasted pretty good. Funny how people don't mind eating shrimp or crab, but draw the line at bugs :-)
Reply Show all 1 replies

Kim B a month ago
You are far braver than I am!!
Reply Show all 3 replies

Sleiman Azizi Author a month ago
Food is food!
Reply

Kim B a month ago
My brain does not want to listen to that memo!
Reply

Elizabeth S a month ago
Ibaraki people have told me they're good. Okay, I'll try them once!
Reply Show all 3 replies

Sleiman Azizi Author a month ago
There's nothing to not like about them. Perhaps too sweet?
Reply

Bonson Lam a month ago
It is interesting that they are so sweet. Usually Kyushu food has more sweet ingredients/ cooking style than Kanto. My theory is that Kyushu was historically closer to sugar markets in Okinawa and elsewhere, so it is interesting to understand why this Kanto recipe is so sweet. Or they are trying to hide some of the more bitter elements of this dish?
Reply

Sleiman Azizi Author a month ago
It may have something to do with the natural flavour of locusts?
Reply

Elena Lisina a month ago
The appearance of food is important, and this one doesn't appeal to me. :\ It may be good if they were grinded, for instance, and made in a shape of a cracker. But they look like insects... not nice for me. ;)
Reply Show all 1 replies

Bonson Lam a month ago
It is amazing the cooking techniques they use to make this so delicious. I have tried something similar in Mexico, but this I haven't heard of. Keep it up with these unique perspectives from Japan!
Reply Show all 1 replies

Sleiman Azizi Author a month ago
I'd like to try them prepared in a different way.
Reply
14 comments in total