The Story of Hanami

You would be hard pressed to find a more iconic image of Japan than the fabulously beautiful cherry blossom tree blooming in spring. Along with samurai and sushi, these sakura trees loom as one of Japan's most popular images. The culture of celebration that surrounds their blossoming is one the nation's premier social traditions.

Known as hanami, this tradition has existed in some form since at least the eighth century. In those early days, though, Japan's most admired flower wasn't the cherry blossom. Courtesy of neighbouring China's cultural influence, Japan's social elite instead favoured the beautiful ume plum. A decision, though, to end the practice of sending officials to the mainland seems to have been the catalyst for Japan's aristocracy to discover their land's own native appeals.

Gathering in small social groups to drink and dine while surrounded by the blossoming flowers gathered momentum during the culturally refined Heian Period, certainly among the aristocracy. Hanami practice saw the social elite putting on airs in front of each other while the common folk were kept at a distance. Unlike the almost rowdy but very much egalitarian atmosphere seen today, the hanami tradition was still very much in its infancy.

This social division would more or less remain until the mid-seventeenth century. Preceded by centuries of non-stop warfare, the new Edo period must have been a veritable golden age with urban culture flourishing. Many of the traditions now considered quintessentially Japanese trace their origins back to this time, including modern cherry blossom viewing parties.

During this period, Japan's eighth shogunate leader, Tokugawa Yoshimune, greatly affected the spread of the hanami tradition by planting scores of cherry blossom trees. Just as importantly, the shogun also created areas in what is now modern Tokyo that allowed the public to gather easily, making it a relatively simple matter to get together and celebrate. The hanami we know of today is a direct result of those times.

These days, hanami cherry blossom viewing parties are about as far removed from their refined aristocratic origins as can be imagined. Drinking and eating with all day conversation, people from all walks of life and from all across the country continue to gather, ensuring that Japan's premier springtime social event will continue on for another thousand years. 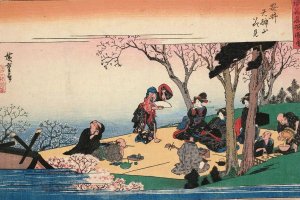 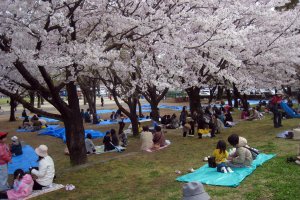 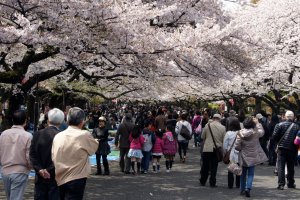 Kim B 5 months ago
Fascinating to learn about how something so iconic started!
Reply Show all 1 replies

Sleiman Azizi Author 5 months ago
And to think that there is so much more that could be said about it all.
Reply

Bonson Lam 5 months ago
My favourite Hanami experience was at Osaka Castle garden. Lying on the grass, looking up at the skies all lit up with cherry blossoms. All I need is an outdoor Takagi Noh performance with the castle as the backdrop.
Reply

Elena Lisina 5 months ago
I was really amazed by the crowd in Ueno park at hanami! Of course, blooming sakura is a magic event!
Reply Show all 2 replies

Sleiman Azizi Author 5 months ago
It's an amazing time, that's for sure. I'm sure next year's hanami will be incredible.
Reply