Takeshita Dori of Harajuku vs Jizo Dori of Sugamo

There isn’t really anything like shopping street culture in my country. Yes, there are lots of shops, but there aren’t any age-oriented shopping streets or centres the way Japan has. Of course, fashion is for all ages and in Tokyo I found a fashion street aimed at youth and one for ladies of mature age.

On the very first day of my very first visit to Japan, my friend took me to Takeshita Street in Harajuku where I was really shocked by the large crowds of young people all dressed in the most imaginative of styles! All kinds of fashions were displayed in the shop windows with an incredible range of clothes, hats and accessories, and young people shouting out advertisements and invitations to purchase. The whole atmosphere of the street was lively, energetic and quite festive. We visited speciality stores for fans of J-pop groups like ARASHI, KAT-TUN, Kis-My-Ft-2 and others, all selling photos, posters and accessories of the ‘idols’. I don’t remember if I picked up something or not on my first visit, but I later returned to Takeshita for some shopping several times.

One of the most fascinating things about Tokyo is its ‘cosplay’ culture and the fact that you can always meet people (not always young by the way ) dressed for ‘cosplay’ on the streets. My first reaction was one of surprise but I soon became used to the sight and found it nice. You will find many cosplay outfit stores along Takeshita Dori as well as many cafés and other attractions for youth. You won't find many elderly people along Takeshita Dori.

You will find many, though, on Jizo Dori in Sugamo. Ironically, I visited Jizo Dori on the last day of my last visit and bumped against large crowd of people across many ages! A festival was underway with live music and lots of happy people. You know, I even spotted Jizo Dori underwear for sale that was bright red and believed to bring good health and strengthen to its wearer... I used to think it was a joke but it wasn’t - the colour red followed me everywhere! Along with that ‘unusual’ underwear, all sorts of goods were available and I picked up a nice bag, a purse made of Japanese silk, a jacket, as well as some souvenirs and treats. I wish I had checked out Jizo Dori earlier!

Young or old, Japan is a shoppers paradise with something for everybody. Takeshita Dori and Jizo Dori are just two of the more famous examples. 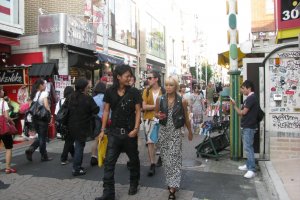 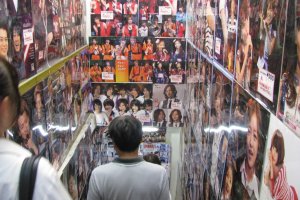 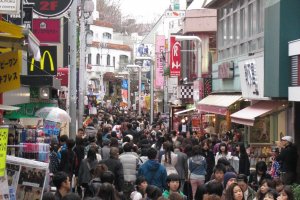 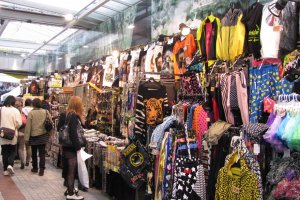 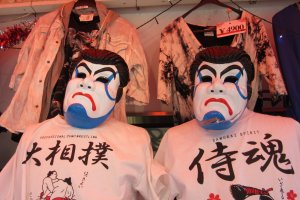 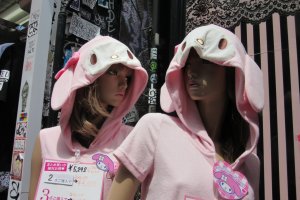 Elizabeth S a year ago
The red pants store, Maruji, is an institution on Jizo Dori.
https://en.japantravel.com/tokyo/maruji-the-red-shop/4945

Elena Lisina Author a year ago
In such amount it's amazing! I also have the photo of that shop, but I can't read Japanese. : P
Reply

Sleiman Azizi a year ago
Even if you don't buy anything, just visiting and catching the vibe makes for a fascinating experience.
Reply Show all 1 replies

Elena Lisina Author a year ago
Yes, but always pick something, at least in DAISO! ; )
Reply

Kim B a year ago
An interesting contrast!
Reply Show all 1 replies

Elena Lisina Author a year ago
Yes, and it is what surprised me as we don't have such districts here. Also, when I went to watch boy band KAT-TUN the audience was only female, no men or boys! That was amazing as we always have mixed public.
Reply
7 comments in total