Over a million irises in hundreds of varieties

Each year in June, the Suigo Sawara Ayame Park is home to an iris festival with over 1.5 million irises in 400 varieties for visitors to enjoy. When the flowers are in full bloom, the park shop also sells a range of different local products, souvenirs, and even iris plants if you'd like to try growing your own at home.

For those who enjoy hands-on experiences, it's worth checking out the events and classes they typically hold during the festival dates, including workshops on how to separate iris roots in order to propagate more plants.

For those utilizing public transport, the park is around 20 minutes by taxi from Sawara Station on the JR Narita Line. Typically, there are shuttle buses that run from the station to the park during the festival, but there has been no official guidance if they will resume this year due to COVID. 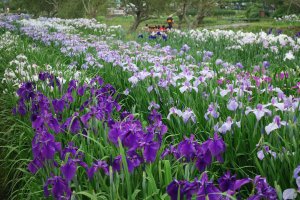