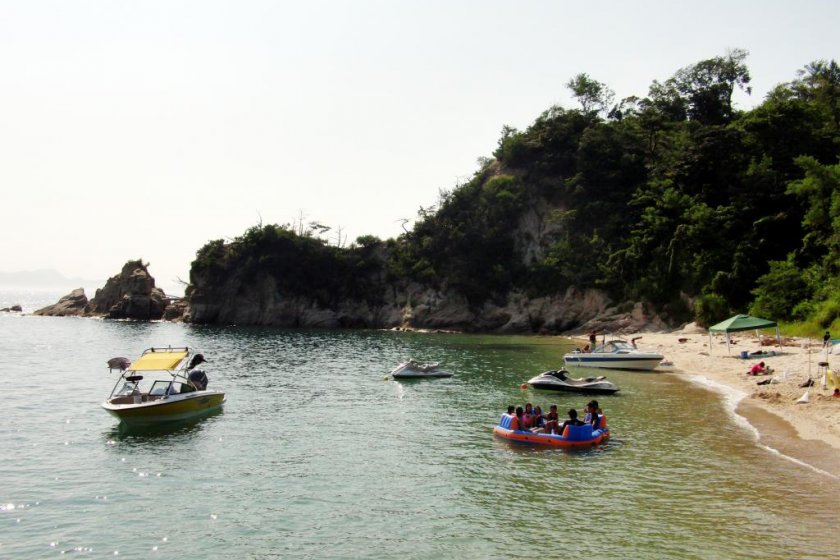 Two fine beaches with a convenient Road Station nearby

The secluded bay round the corner

The northern half of Ehime faces the Seto Inland Sea, a beautiful body of water dotted with islands. The eastern half borders the sea known as Uwakai, which merges with the Pacific Ocean. While the coastline of Ehime is generally rocky, there are many bays and inlets where a rough sand of ground seashells accumulates. These beaches can be found within the boundaries of all the coastal cities, many of them within easy walking distance of railway stations. Needless to say, they’re very popular with citizens on weekends during the hot months, and so weekends are a good opportunity to meet local people when they’re letting their hair down. But on weekdays, travelers can pretty much enjoy these beaches to themselves.

Most people start going to the beach from the end of July, which generally coincides with the end of the rainy season. At this time, the heavy rainfall of the monsoon carries soil and plant matter down from the mountains, strewing the beaches with twigs and making the water of the Inland Sea generally cloudy. Once the rainy season ends, conditions improve quickly.

Fuwari is a beach and Road Station combined (ふわり海岸 Fuwari Kaigan). You can park and eat at the Road Station, and skip across the road to the beach with your inflatable alligator or whatever it is you have. Alternatively, you can carry your alligator on the train to JR Oura Station (大浦駅 Oura Eki) and walk from there. The first beach that you encounter is a real fleshpot. It’s very popular with young people who like to have all-day barbecues. They pitch tents here, cook meat, play beach volleyball and splash about in an area of water that’s protected by a concrete breakwater and buoys to keep out jet surfers. This little pond gets pretty murky, but nobody seems to mind. Just behind the seawall, there are free showers and toilets, which are very convenient.

For those who like a bit more seclusion and water that hasn’t been churned up by the masses, there’s a very pretty beach about three minute’s walk around the headland, with sand and rocks and beautiful pines. Unlike the Pacific Sea on the southern side of Shikoku, the water of the Inland Sea tends to be a little chilly even in the height of summer, so a dip is always highly refreshing.

Fuwari is not just a place to go in the summer. Even in the other seasons, the beach is attractive, reflecting the changing faces of the seasons. A stroll along the beach and around the headland, followed by something hot in one of the nearby restaurants makes a very pleasant seaside break at any time of year. 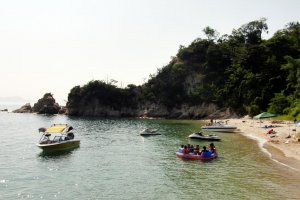 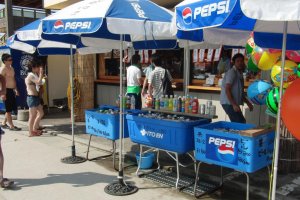 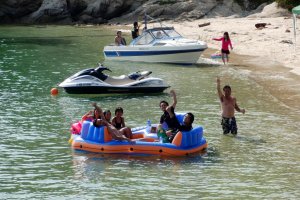