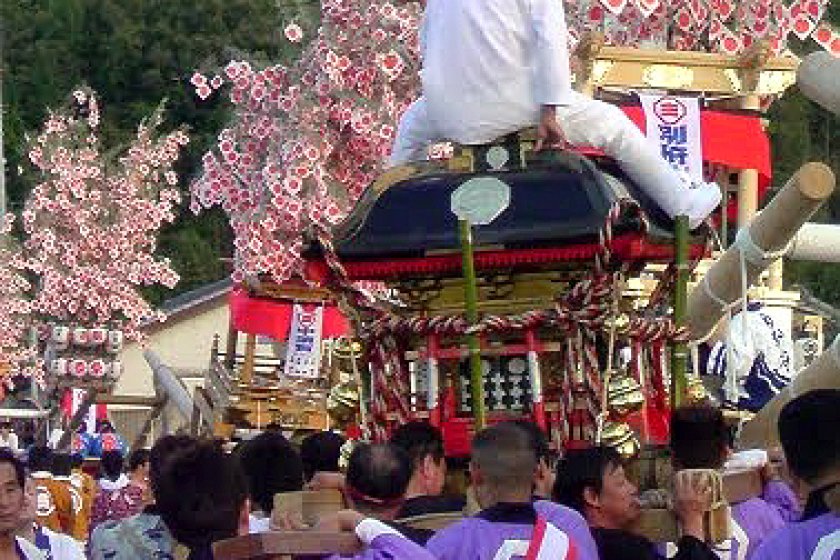 As the weather begins to cool and the rice is ready for harvesting in early October, the town of Hojo in northern Matsuyama holds its colorful autumn festival. Each district within Hojo has its danjiri – a wheeled festival juggernaut with a central platform mounted with a drum and bell, and two huge wooden poles. The weekend before the festival, the danjiri is taken out of storage, the poles are lashed with ropes to the platform, and the whole thing is decorated with lanterns, curtains, and bamboo fronds, hung with hundreds of red and white paper streamers. For the week before the festival, excitement runs high in Hojo.

On Saturday evening as dusk falls, the generators in the danjiri are fired up so that light pours from the lanterns, illuminating the bamboo fronds and streamers in a beautiful display. People of all ages turn out in koikuchi, a pajama-like outfit of motley colors, decorated with dragons and other fanciful patterns. Over this they wear a uniform happi coat, emblazoned with the name of their village and its heraldic symbol. During the festival, the boys and girls are released from the conventions imposed by their schools, and they delight in styling their hair in a wild array of gravity-defying shapes, and applying copious makeup. Normally plain kids suddenly become beautiful.

With drums and bells thumping and clanging to a mesmeric beat, the danjiri of each village are trundled through the dark to rendezvous on certain open roads. By this time, the adults have swilled a good quantity of beer, and the atmosphere is electric as people greet their neighboring friends and acquaintances. There’s a good deal of joshing and horseplay. Then the danjiri are wheeled into phalanxes and pushed up and down the road. The adults put their shoulders to the poles while the children stand on the platform, blowing whistles, gesturing, bouncing up and down, and yelling “Yoisa!” Sweating like slaves in a galley, the adults manning the poles yell back “Yoisa!”. Everybody goes hoarse.

On Sunday morning and evening, the performance is repeated. At 6 am, the danjiri gather in front of Takanawa Shrine in Hojo, and the celebrants stream into the shrine grounds to make a brief devotion, drink a cup of sake, and watch a display of vernacular theater including a dragon dance and boys dressed as foxes performing acrobatics to drumming by two very ancient gentlemen.

The third day of the festival involves mikoshi. These ornate boxes on poles contain the god of the local shrine who is transferred from their habitual abode in the shrine for a special excursion around the village in the god box. Each area has its own customs involving the mikoshi. Some like to return the mikoshi to the shrine at a fast run at the end of the day. Others like to throw the mikoshi off the dock into the river (Myojo River), or cast it down the steps of the shrine until it smashes to splinters (Kunitsuhikonomigoto Shrine). Whichever village you happen to visit, you can’t help but notice that Shinto piety is a simple and joyous community affair. 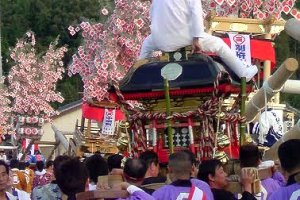 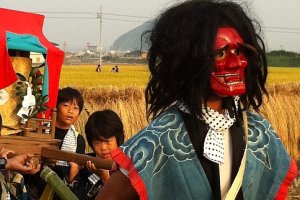 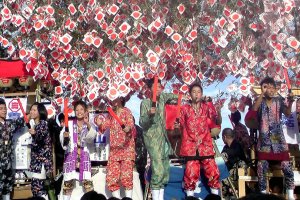