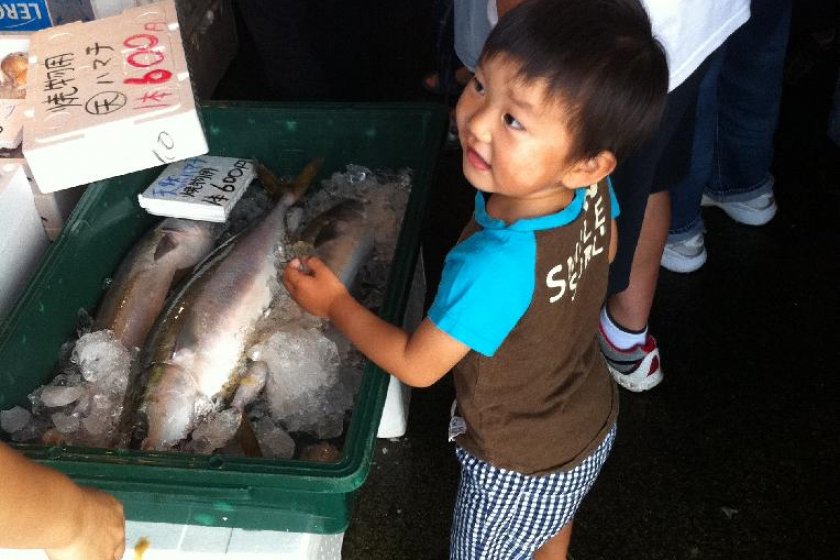 Seafood in the raw

The Mitsu morning fish market, or ‘Mitsu no Asa Ichi’ is held twice a month at the Fisheries Wholesale Market in Mitsuhama Port, Matsuyama. I went on a hot Saturday morning in mid-August.

The event is divided between marquees erected in the car park of the market, the individual shops within the building, and the main hall of the market. In the car park, stalls serve a variety of fish-based foods such as octopus balls (takoyaki) and fried fish paste (jakoten), which the customers eat as they wander around or sit in the shade offered by the marquees. Others stalls sell fruit, vegetables, and condiments at reasonable prices. Musical entertainments included a taiko drum performance by the drumming team from a local school, and some rather idiosyncratic renditions of popular Japanese tunes on an okarina and zither.

But the real attraction is inside the Wholesale Market. Cool and dark inside, it’s packed with people shuffling past the stalls offering fish large and small, octopuses, shellfish, shrimp and everything else from the sea that the Japanese love to eat. The prices range from amazingly cheap to surprisingly expensive, but everything is guaranteed to be fresh. The fishmongers are as interesting to see as their wares–I watched grizzled old fishermen expertly filleting sides of tuna while some fresh-faced lads lounged nearby smoking and slyly squeezing each other’s stomachs to see how their paunches were coming along. As we say when appraising quality tuna, “There’s a good deal of fat on this”.

In the cavernous main hall, a pool had been set up containing a lot of live sea bream and flatfish. Visitors paid 200 yen a go to try catching one with a little bamboo fishing rod. Successful amateur fishers were rewarded by a vigorously flopping fish at their feet, which the professionals waiting behind them dispatch with quick gaff to the head.

Indeed, the fish market is not for the squeamish. You will certainly see plenty of blood and guts, and the smells can be quite intense. I heard one little girl exclaim to her mother, “I’m used to the smell now!”. However, there’s no better way of experiencing the interface between the sea and the marketplace, and discovering how the common townspeople enjoy their seafood. This is Ehime's answer to Tokyo's famous Tsukiji Market.

The market is open on the 2nd and 4th Saturdays each month from 8:00 to 11:00, although by 10:00, most of the fish is sold and things start to wind down. If you visit in winter, be prepared for cold and wind because you’re right next to the sea. 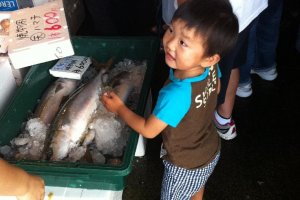 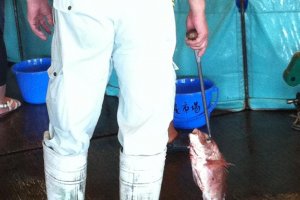 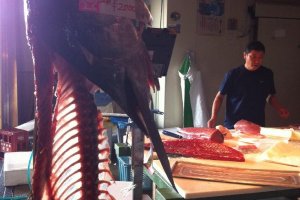