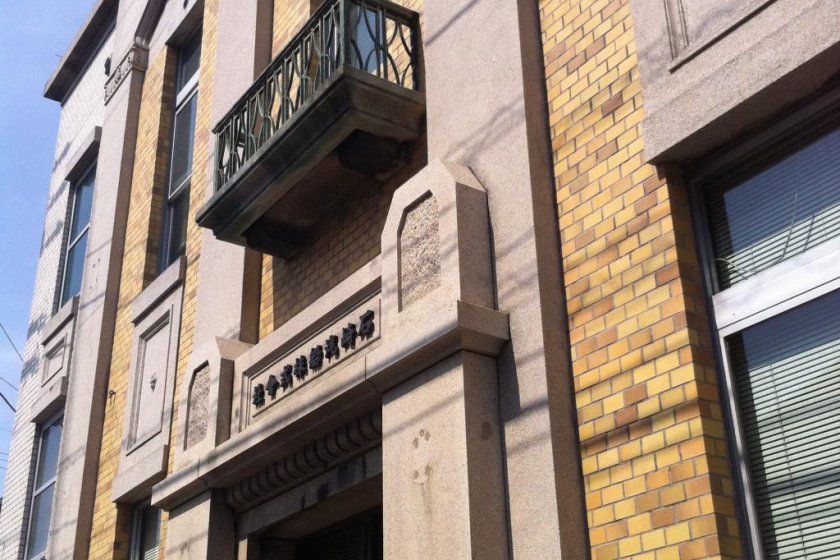 A historical office building from the Taisho Period

The facade of the Ishizaki Kisen offices

Mitsuhama, or Mitsu for short, is the old port area of Matsuyama. Originally a separate village, it gradually became merged with Matsuyama as the city expanded. In the old days, whenever the people of Matsuyama had to go anywhere, they would generally go to Mitsu to get on a boat. Three sides of this area are water, the Seto Inland Sea and the Miyamae River. Mitsu has many fascinating and beautiful old buildings lining its narrow streets, which are arranged in a regular grid.

One of the buildings of interest is the office of Ishizaki Kisen (石崎汽船), the ferry company that runs the Matsuyama to Hiroshima service across the Inland Sea. The offices were built in 1924 by Shichiro Kigo, the architect who designed the grandiose Bansuiso Villa and Prefectural Offices, also in Matsuyama. Kigo’s buildings are generally Western in style, although the uses to which they’re put and their surroundings make them seem quite Japanese. If you call Ishizaki Kisen in advance, you can get a guided tour from a very droll and self-deprecating member of staff. Our guide noted the extravagance of the founder of Ishizaki in electing to have his offices built by Kigo—“He must have been jolly rich”. The building is unusual in being constructed of steel and concrete. Kigo apparently insisted on it as one of the lessons learned after the Great Kanto Earthquake of 1923 that leveled Tokyo.

The first floor is a largish room with fine plaster work on the high ceiling. The counter is of high-grade marble, although it’s largely obscured by posters of ferries. We were shown up a flight of stairs to the President’s office. The banisters, especially the pillars, are impressively carved in a Japanese art deco style. “As a special treat”, we were taken up the narrow staircase (“This is going to fall down soon”) to the roof, which is flat. It looks out onto Mitsu port. Ships used to dock right next to the building in Mitsu Harbor. “Instead of building the offices in town where the employees could have had some fun, the founder chose to put his offices right next to the harbor. This building was the biggest one around in the early days, and it was a landmark for the ferries to aim for when they came in to dock.” Now the ferry sails from Matsuyama Tourist Port in Takahama.

The tour continued. In one of the offices on the ground floor is a stained glass window showing a white heron standing in a circular pool of steaming water. This represents the founding myth of Dogo Onsen—the heron injured its leg, and it was observed to regain its health after bathing in the hot spring. The stained glass was taken from one of Ishizaki Kisen’s ferries when the ship was scrapped. It attests to the splendor of the ships then in service between Matsuyama and Hiroshima.

Unless you’re a devotee of Taisho Period Western-style architecture, I’d hesitate to recommend that you take the tour of Ishizaki Kisen, although it’s well worth seeing the façade and popping in the front door to have a look at the main office. In that case you can say “Mitteru dake desu”—I’m just having a look. 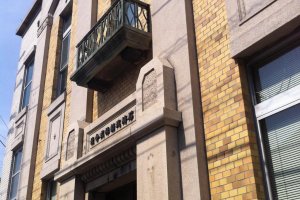 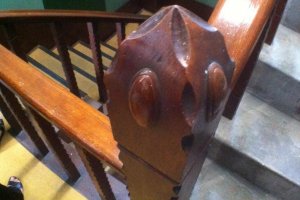 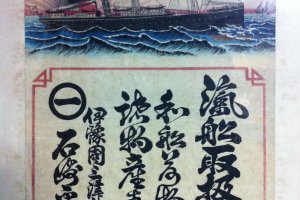