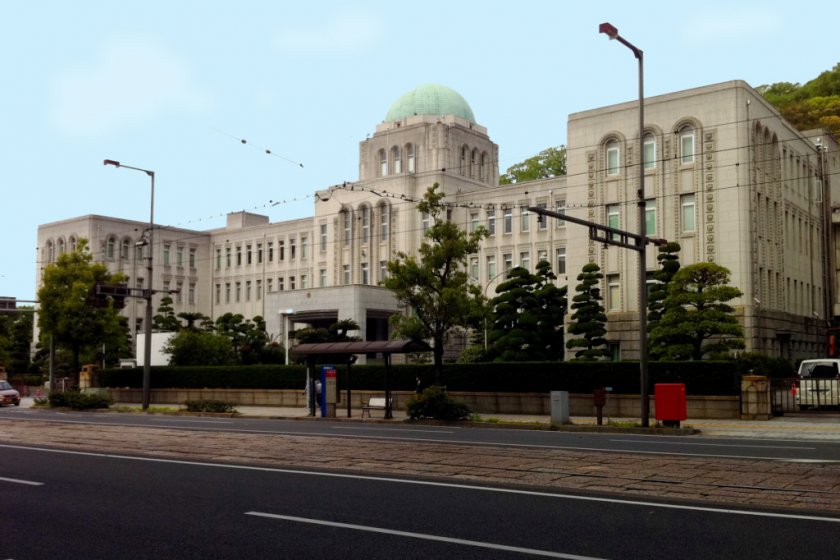 An elegant building by the architect Shichiro Giko

View from the street

The Ehime Prefectural Office is not commonly featured as a tourist spot because it’s a working municipal building. But the original wing of the Prefectural Office is architecturally beautiful, especially inside, and if you’re in the area, it repays a visit. You’ll find the municipal employees generally welcoming too. If you need an excuse to visit, there’s also a tourism department within the building that has brochures about practically everything in Shikoku, a lot of them in rather bad English.

Apart from its copper plated dome, the exterior of the Prefectural Office is not particularly striking. It’s only when you get close to the building that you start noticing its charm—the simple, quiet decorations, the slightly art deco lights. You notice too the huge, yawning entranceway that seems to suck you in towards the interior and draw you up the stairs. Once inside, the scale generally isn’t so grand. In fact, the corridors and stairways are all on a very human scale. You can wander about freely inside, and even get up on the roof next to the dome if you don’t mind climbing over some dusty cardboard boxes. The central staircase reminds me of an M.C. Escher picture, with pillars and bulging parts and even little windows that suggest esoteric views. You can see people moving up and down the stairs from a number of odd angles.

While the corridors and offices have a markedly dowdy and bureaucratic air, there are some spectacular assembly rooms. These are found directly adjoining the landings on each floor. Visitors are kindly asked to refrain from going into the rooms, but there’s nothing to stop you poking your head inside and having a very good look at the pillars, moldings, wooden paneling and other splendid features. From the outside, it’s hard to imagine that the building contains such vaults within.

The Prefectural Office is close to many other attractions including the Saka no Ue no Kumo Museum, Matsuyama Castle, and Ropeway Dori. 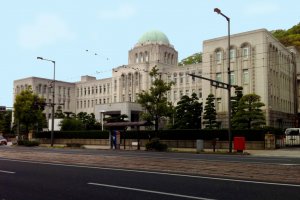 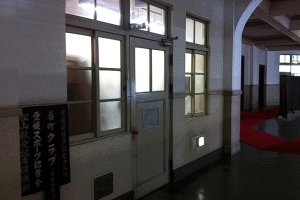 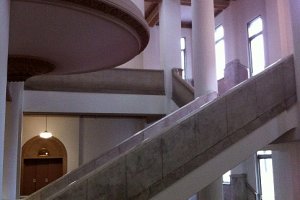