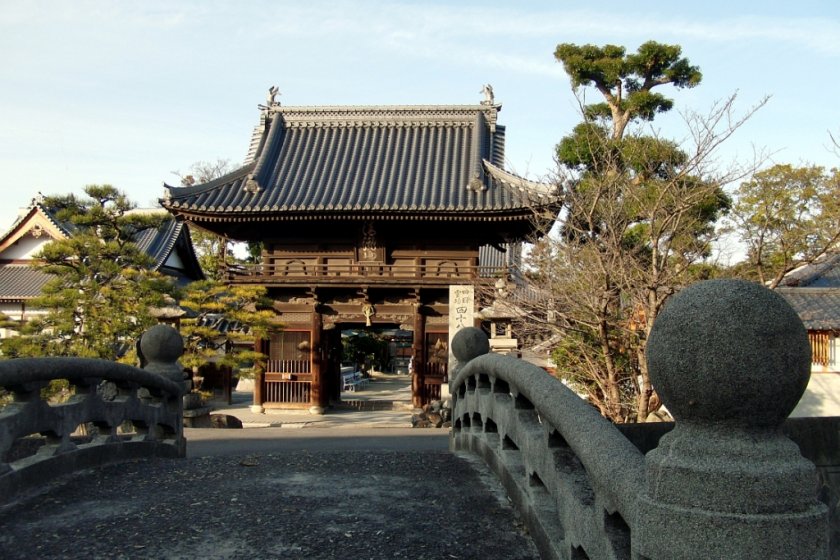 No.48 of the Shikoku 88 temple pilgrimage

Sairin-ji sits on a low-lying plain next to a little river. I visted Sairin-ji on a winter’s afternoon in December when the sun was low in the sky but still warm. Off in the distance to the east, I could see a line of snowy mountains.

Though old, the temple is actually somewhat new-looking. It sits in grounds that are laid out in paths and borders with straight lines. Here and there are blocks of garden, with picturesque rocks and well-manicured pines and camellias. Prehistoric-looking sago palms, which are resistant to manicuring, add a touch of sub-tropical wildness.

Every temple on Shikoku’s pilgrimage route has a building called the daishi-do to venerate Kobo Daishi, the founder of the pilgrimage. The one at Sairin-ji has clearly been built recently as the wood is still a light brown and the tiles have yet to develop the patina of age.

The Matsuyama Board of Education posts educational signs at all of the major temples in the city, and the one for Sairin-ji has this to say;

“Sairin-ji Temple is the 48th of the 88 sacred temples of Shikoku. According to temple records, it was founded in the middle of the 8th century to the northeast of its present location. It is said that the temple buildings were moved here by Kobo-Daishi (Great Teacher) at the beginning of the 9th century.

In a document detailing the 88 temples along the sacred pilgrimage route of Shikoku, there is a legend concerning the pond west of this temple, which is known as ‘Jo-no-fuchi’. It states that long ago, when people were suffering due to an extended drought, Kobo-Daishi prayed at sunrise, and thrusting his staff into the ground, caused water to gush into the air. The beautiful deep blue water that resulted was of an amount beyond measure.

The original temple buildings were destroyed by fire, and later rebuilt by Matsudaira Sadanao, feudal lord of Matsuyama, in 1700. Jo-no-fuchi Park is found to the west of the temple. It is said that the spring there flows constantly. It has been designated one of Japan’s 100 famous bodies of water.”

In fact, you don’t have to go west to find an interesting body of water, because Sairin-ji has its own, a small pond with a Buddha on an island in the middle. The pond holds the most beautiful carp I’ve ever seen, anywhere. The largest of the carp, a great yellow creature, muscles up expecting to be fed. He doesn’t object to being stroked like a dog, but he will try to swallow your finger. 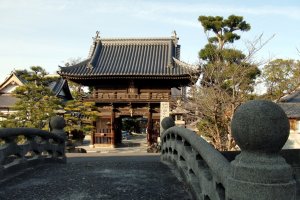 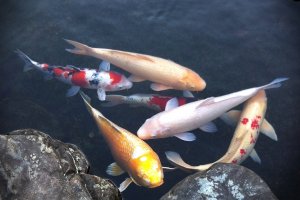 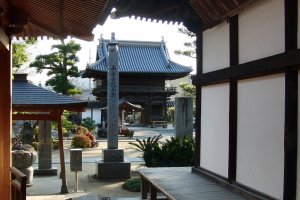 JJ Walsh 10 years ago
looks and sounds intriguing, an interesting review- thanks!
Reply Show all 0 replies
1 comment in total