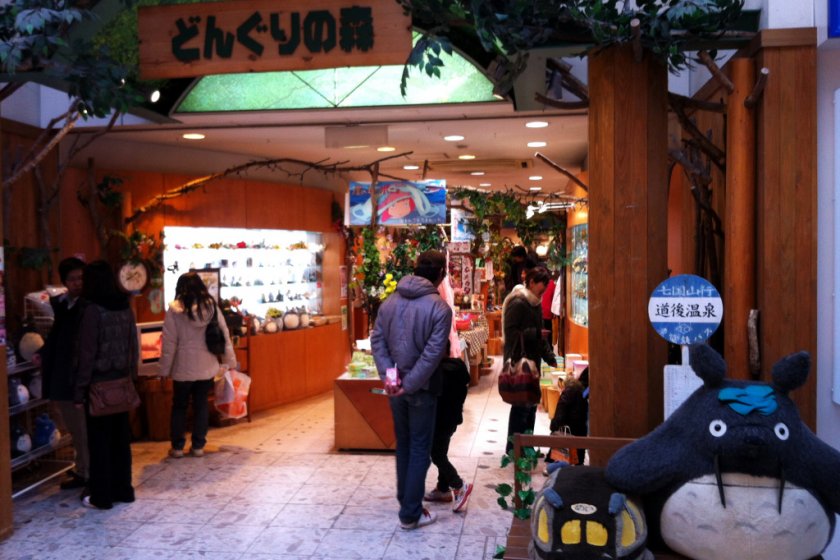 Get your Ghibli souvenirs at Donguri no Mori

Dogo Onsen is the model for the spirit bathhouse in the smash-hit animation Spirited Away, a movie from Studio Ghibli. The movie happens to be the most successful Japanese film of all time, and Studio Ghibli has produced a whole string of animation hits, both before and after Spirited Away. Other productions you might have heard of include Grave of the Fireflies, Kiki’s Delivery Service, Porco Rosso, Princess Mononoke, Howl’s Moving Castle and the perennial favorite, My Neighbor Totoro. These works have been dubbed into several languages and enjoyed considerable success in cinemas overseas. Most of the films are set in an indeterminate ‘retro’ period of time, when there was abundant greenery and clean water. They manipulate the emotions with great skill.

As you’re walking up Dogo Arcade from the direction of Dogo tram station, the old Dogo Onsen Honkan building seems to peer at you down the tunnel of the arcade. Entranced by this surprising sight, you may not notice the Studio Ghibli Shop, Donguri no Mori on the right hand side. But if you’ve ever enjoyed a film from Studio Ghibli, chances are you’ll like the shop too. In contrast with the other shops in the arcade, it’s all apparently made of wood, and there’s some fake greenery evoking the typical Ghibli atmosphere. Outside, you’ll spot the fluffy Totoro and the Catbus sitting on a bench.

Inside, there are all sorts of attractive Ghibli-themed products, ranging from purely decorative objets d’art, to items of some practical use. Much of the stuff is designed and priced to appeal to children—key rings with cute characters on them for ¥200 (and I mean, really, really cute). The practical items include towels, plates, toilet seat covers, slippers, plant holders and Zippo lighters, all incorporating images from the animations in some fairly imaginative ways. If I wasn’t such a hard-hearted person, I could see myself easily buying large quantities of objects to decorate my home. The plant holders are particularly clever and attractive—in the films, some of the monstrous robots and giant life forms end up with plants growing all over them, and you can recreate these effects in your own home with a very reasonably priced Ghibli plant holder.

At the back of the shop is a small café where you can sit and gaze at pictures of scenes from the films. You can get a cup of coffee for ¥380, or one of several types of local orange juice for ¥350.

There are many other good shops for souvenirs in the arcade, but I advise saving some of your yen until you’ve seen the Ghibli shop. 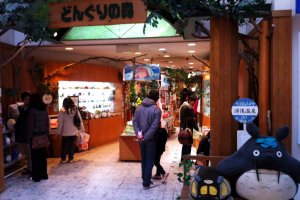 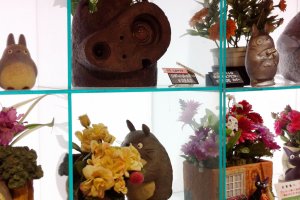 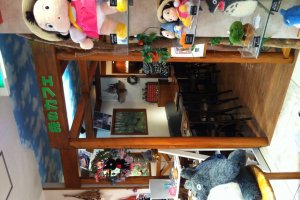 Shaymaa Barakat 6 years ago
I love Ghibli works, Thank you for letting us know about these places.
Reply Show all 0 replies

Justin Dart 9 years ago
Another Great article from Rod!

I love that the shop is called "Donguri no Mori" (Acorn Forest) which reminds me of My Neighbor Totoro. My children have grown up on Disney and Ghibli. In fact, my son has been watching Kiki's Delivery Service every night for the past week. I adore Ghibli and even wrote a paper in university about "The Themes of Ghibli films in connection to Japanese Traditional Culture" (focusing on Totoro and Princes Mononoke).

Miyazaki Hayao is to Japan like Walt Disney is to the USA. It is great to know there is a Ghibli store just like there are Disney Stores to help capitalize on the great Ghibli characters like No Face, Totoro, Mei, Satsuki, and my favorite Porco Rosso. The Ghibli characters are mysterious, leading characters are strong and the themes reach both youth and adults easily. If I ever get down to Matsuyama, I know where I can take my kids for some souvenir shopping. Thanks Rod.
Reply Show all 0 replies
2 comments in total