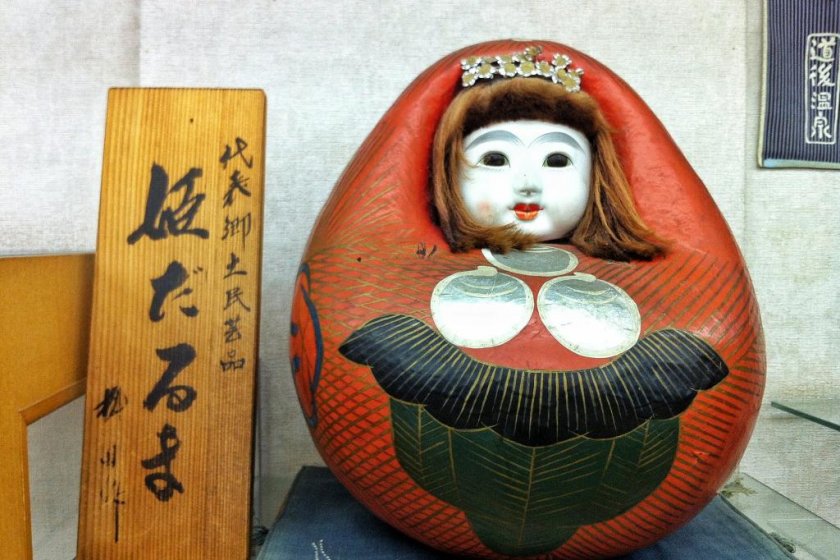 The Princess Daruma Dolls from Matsuyama

When you visit Matsuyama, you’re likely to come across some roly-poly round dolls which are commonly used to decorate shops and homes. Male versions of this kind of doll are common throughout Japan and they’re known as daruma after Bodhidharma, the founder of Zen Buddhism. But female versions are unusual, and they’re essentially unique to Matsuyama. They’re called himedaruma, and hime, which means ‘princess’, refers to a lady who had a special connection with Matsuyama.

This was the legendary Empress Jingū Kogō, who is said to have conquered Korea (although there’s no historical evidence for this). Visiting the hot spring at Dogo in Matsuyama with her husband Emperor Chūai on her way to Korea, Jingū discovered that she was pregnant. She had a doll made, and offered it to the local gods to pray for the safe delivery and healthy upbringing of her child. Although she was pregnant for a legendary three years, a male child was born, who later became Emperor Ōjin. Isaniwa Shrine, which stands on the hill behind Dogo Onsen, is said to have been founded on the site where Emperor Chūai and Empress Jingū bathed.

The original dolls were made of wood, but today’s dolls come in two main variants, papier-mâché and brocade.

The papier-mâché type are generally painted bright red like conventional daruma dolls, while their faces are made of white bisque ceramic, painted by hand with red lips and black eyes. Their hair may be painted, or they may have artificial hair. The papier-mâché type typically comes unchaperoned. These are often given to pregnant women as talismans for an easy birth and quick recovery.

The brocade variety on the other hand, come as a couple representing the Empress Jingū and her husband Chūai. She wears red brocade, while he wears blue, or gold. Not surprisingly, these are frequently given as wedding presents.

The dolls are light and easily transported, so they make good souvenirs of your stay in Matsuyama. They also come in a range of sizes. Besides the dolls themselves, you can find himedaruma used as a cute motif on mobile phone accessories, purses, handkerchiefs and other textile items.

Dogo Arcade is a good place to look for himedaruma, and Minotaya (港や) on Ropeway Dori specializes in them. 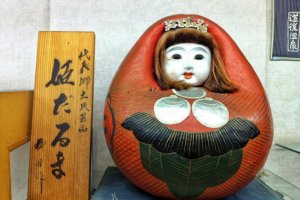 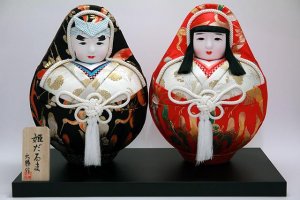 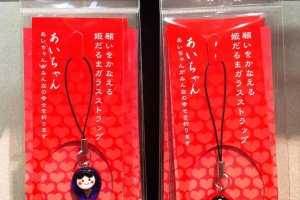 Elena Lisina 4 years ago
I was given such a doll, but didn't know its story. Thanks!
Reply Show all 0 replies
1 comment in total