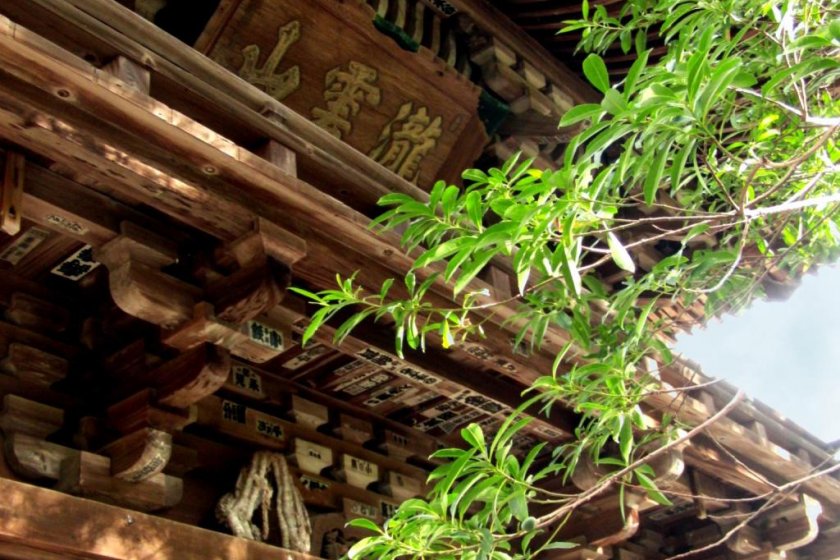 Temple No. 52 of the Shikoku 88 temple pilgrimage

Taisan-ji is a Shingon temple in Matsuyama. It’s temple No. 52 on the pilgrimage of 88 temples around Shikoku. The temple stands on a hillside isolated from the city of Matsuyama, surrounded by cypress trees and bamboo groves. People who start their pilgrimage on Koya-san in Wakayama prefecture may be reminded ever so slightly of the path through the trees there, Okunoin. The path at Taisan-ji goes up steeply from the car park, with a final precipitous flight of steps up to the temple from a clearing. As I was coming down after my visit, an elderly lady who was hauling herself up by the handrail mock-plaintively asked me, “How much further do I have to go?!”

The entrance to Taisan-ji is marked by a rather stupendous gate building. It’s made of dark-colored wood, and it has strange projections coming out at all angles. In front of the gate is the main building, the hondo, and you’ll be surprised to learn that this was built in a single day. Or at least some of it – so ‘tis said. The story behind Taisan-ji is that a certain merchant from Kyushu was sailing to Shikoku when his ship was caught in a storm near Takahama on the other side of the mountain where Taisan-ji stands. By this light, he was able to land safely. To give thanks for his deliverance, he brought building materials from his home island (as if there aren’t plenty in Ehime), and built Taisan-ji, which later enjoyed the favor of the lord of Matsuyama castle. The hondo, which is designated a National Treasure, has a very large and attractive roof with weathered tiles of subtly different colors.

The really interesting building however is the bell tower. Someone with a lot of imagination has turned this space into a little diorama of heaven and hell, with a greater emphasis on hell, in the style of Hieronymus Bosch. In hell apparently, sinners get pounded in a giant pestle like sticky mochi rice, or burned in a lake of fire, or gutted by a blue demon. In contrast, the good people lead a seemingly boring existence, standing around in groups with colored disks on their heads. Engrossed as you probably will be by the scenes from the underworld, don’t omit to look up at the ceiling, which is decorated with a number of interesting motifs. Feel free to ring the bell. And repent, lest you end up in the pestle.

From behind the main hall, a path leads up and over the hill to Takahama, where the pious merchant is said to have landed after his ordeal in the storm. Even if you don’t want to go as far as Takahama, the short walk to the top of the hill affords a wonderful view of Matsuyama, Gogoshima, and the Inland Sea. This mountain is also home to the bees who work for Koike Yoho-en, the apiary that provides delicious natural honey to the people of Matsuyama. 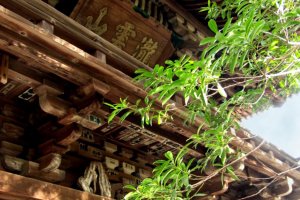 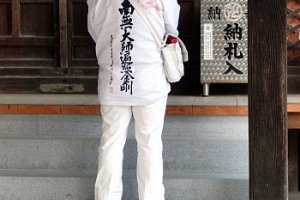 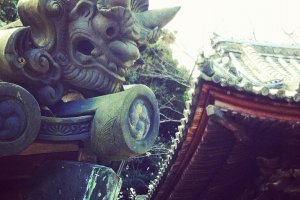 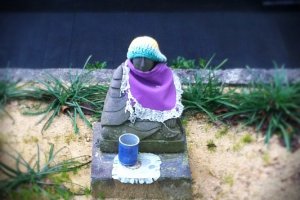 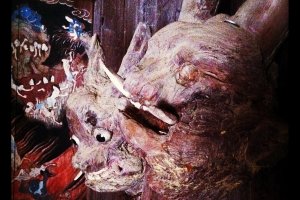 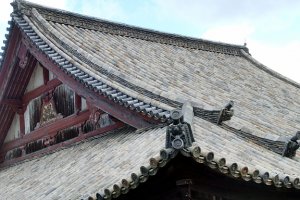