Enjoy these colorful blooms in Fukui

The Nishiyama Park Azalea Festival is an annual event held in early May, where around 50,000 azaleas bloom in various shades of pink, purple, white, and red. The park itself is the perfect spot for a family-friendly day out, as there is also the Nishiyama Zoo on the park grounds. The zoo is free to enter - a rarity for many of the zoos in Japan - and is famous for its red pandas, which are the official symbol of Sabae City.

Come for the flowers, and stick around for the rest of the park's offerings!

Alternatively, for those who plan to drive to the venue, there are several free parking lots within the park grounds. 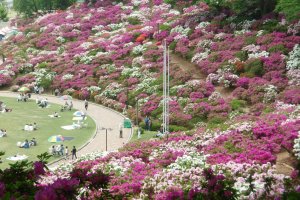