A uniquely designed mall in the heart of Fukuoka

Most people visit shopping malls to do just what the name indicates...shop. And yes, Japan has a multitude of malls, boutique stores, and shotengai (traditional shopping streets) to spend your yen at. Fukuoka's Canal City Mall is one such place where you can get your retail therapy fix, and you'll find a wide range of both Japanese and international brands spanning the complex. However, what's most unique about the mall here is the design of it, which is certainly appealing and eye-catching from an architectural standpoint.

The mall was designed back in 1996 by the Los Angeles based architectural firm Jerde, with the ultimate aim being to reinvigorate a city that was struggling at the time. It's hard to believe that the vibrant, bustling Fukuoka of today was a city where shopping areas were facing years upon years of declining sales, but it was their reality. The vision behind Canal City Mall was to create a unique gathering point for the city, and incorporating the use of greenery and water in the plans - and that's still a prevailing concept at the mall today.

In its first year, foot traffic through the mall exceeded 16 million visitors - it was a mind blowing transformation for the city. Aside from the shopping at Canal City, there's plenty to keep guests occupied, from movie theaters and restaurants to a daily water fountain show.

The Canal City Mall is located just over ten minutes on foot from Hakata Station, served by the Kyushu and Sanyo Shinkansen lines, the Kaogshima Main Line, the Fukuhoku Yutaka Line, the Hakata Minami Line and the Kuko Line. Taxis are widely available at the station if you'd prefer not to walk.

If you're staying at the Grand Hyatt in Fukuoka, you'll find the mall is directly connected to the hotel. 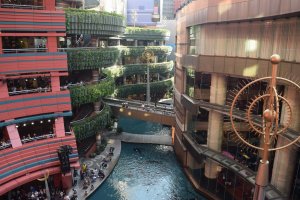 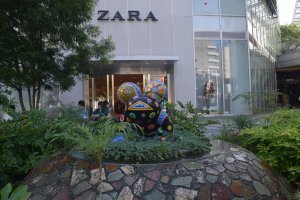 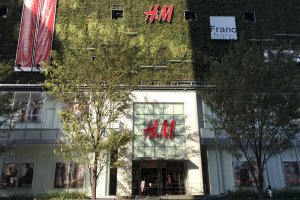 Guillaume Doré a year ago
Just went today, I liked the water fountain show, there was also an Evangelion themed swow with projection and water jet. Was a fun stop while in the area.
Reply Show all 1 replies

Kim Author a year ago
I liked it a lot! When we visited there was an interactive projection show by the fountain area too. Really cool!
Reply

Elena Lisina a year ago
I made a note about that place when planned the trip to Hakata, but it didn't happen, alas!
Reply Show all 2 replies

Kim Author a year ago
Hopefully you can visit one day! We thought it was really cool!
Reply

Elena Lisina a year ago
It's a long way from Tokyo and qite expensive, so I must buy JR Pass to travel that far. But I hope to travel there some day to visit my long-term friend.
Reply

Sleiman Azizi a year ago
Wow, that design is something else alright. Very impressive.
Reply Show all 1 replies

Kim Author a year ago
It's really beautiful, and definitely seemed to be a gathering place for people when we visited!
Reply
7 comments in total