Mummies of the World Exhibition

A special event at the Fukuoka City Museum

A special event taking place at the Fukuoka City Museum will explore 42 mummies from different corners of the world, including South America, Egypt, Europe, Oceania, and Japan. The event will explore the differences in how life and death is viewed across cultures, and why mummification played a role in these societies.

The event will also include two special lectures which look into the history and the latest research regarding mummies. Attending the special lectures is free but does require advance application, which can be arranged via the official event website here.

Adult admission to the event is priced at 1600 yen.

Bus services are also available from the Nishitetsu Tenjin Bus Terminal to the museum area, and the journey takes around 20 minutes. Alight at either the Fukuoka Tower Stop, the Hakubutsukan Minami Guchi Stop, or the Hakubutsukan Kitaguchi Stop (bus numbers 302, 306, 300, 301, and 303 will all get you there), and then the museum is around 5 minutes away on foot. 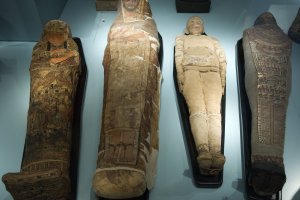 Mummies of the World Exhibition

Alena Eckelmann 4 weeks ago
I would love to visit and see what Japanese mummies they have.
Reply Show all 0 replies

Elena Lisina a month ago
WOW! It's interesting!
Reply Show all 0 replies
2 comments in total