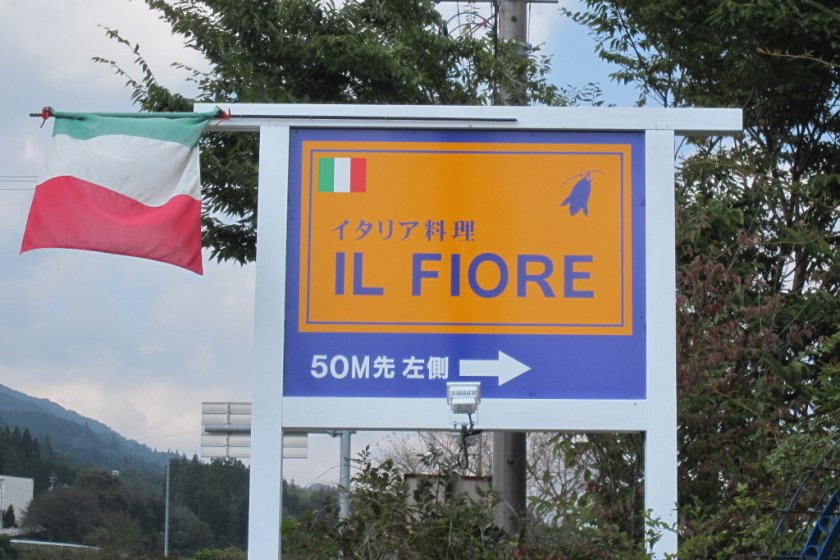 When you travel off the beaten path it is hard to find western cuisine. For those traveling Japan with dietary allergies, even the well beaten path can be a problem. But in the beautiful little village of Kashimo, there is an Italian restaurant that meets all these needs. Il Fiore, The Flower, is a fantastic ristorante to dine for lunch or dinner if you want natural food and have dietary needs. Il Fiore does not use eggs, buckwheat nor dairy. This is a surprise as what would Italian be without dairy! He does this more for family than any dietary movement and it seems to go very well with all his customers.

Il Fiore sits a few dozen meters off the 257 prefectural highway at one of only two traffic lights in Kashimo back off a side road next to a residential home. Surrounded by flowers and a carp pond, Il Fiore is in a remodeled traditional Japanese house with an interior with a gentle blend of internationalism. The lights are low-energy, the walls are half-timber and floor is black stained. The tables are elegant and graced by red, blue and green placemats. Simply relaxing ambiant jazz floated in the background. Il Fiore doesn’t have a set menu. Mr Kubota bases his menus on what is available in the season and on a specific date. Each meal is a set course featuring soups, salads, main courses and fantastic deserts.

Reservations are not necessarily required but highly recommended. The entire restaurant can only seat about twenty-two people and can be very busy on weekends.

During my visit I was treated to a culinary delight that did not bust my bank nor my belt. I chose a “B Course” Menu which included a Nimizata potato soup, Smoked bonito and mushroom in oil sauce or Bolognese tomato sauce and for the main course, Ena chicken cacciatore (Ena chicken in white wine, white wine vinegar and herbs). All of this was wrapped up by a cup of espresso. Though the course didn’t include dessert, I ordered one anyway just to check it out. Though I didn’t order wine, Mr. Kubota has an ever growing wine collection which includes Chateau de Ricaud, Domaine du Tariquet, Paul Mas, and Farnese Don Camillo Sangiovese. He features his new wines on his blog.

The first to arrive at our table was the fresh Focaccia. Il Fiore’s focaccia is simple, but fluffy, airy with the lightest crust and a shiny glint of glazed olive oil which was applied just before the final bake. One could just eat the foccacia all day and be satisfied. This focaccia is not just for customers. Mr. Kubota bakes up a special batch once a month for use at the pre-school. It has got to be one of the only pre-schools out there that serves fresh focaccia.

After only a few minutes it was time for the soup. The waitress brought out white large rimmed bowls with a small tea-cup sized center. Satoimo or taro root, a common fall potato and can be quite heavy. But this soup was a creamy flavorful delight with just a small kick of pepper to excite the tongue. It was a perfect temperature of warmth and sparkled with a swirled drizzle of extra virgin olive oil. For such a small portion it was great satisfaction and so I savored every single sip and wipe the bowl with focaccia.

The restaurant was almost full and I was happy I had reservations. There are only four tables and then four seats at the counter. Even though it was full, it was not crowded nor noisy. Only the mumbling of voices and the sounds of culinary creations from the kitchen could be heard.

Next the pasta course was brought out. I had ordered the bonito and mushroom in oil sauce pasta. I had not really had bonito in its non-dried form and was curious. The pasta was perfectly aldente, the bonita was flavorful without being too strong and the pepperoncini was just enough to give a little bite but not linger too long on the pallet. I have eaten the bolognese sauce before and found it to be an exciting yet refreshing flavor that people of all ages can love. Again by bowl was cleaned with another yummy piece of focaccia.

Now it was on to the main course. Ena Chicken is a local speciality meat, so tender and plump it is not so much meat as much as a beautiful creation. Two lightly peppered chicken legs glistened in a savory mix of its own broth and tomato. These were accompanied by a small lightly buttered potato, a green bean, carrot, red bell pepper and garnished with flakes of basil. Picking up my knife and fork I gently took a piece of meat from the chicken. It was so tender that it just slid off the bone. No force was needed, no additional cutting. It was as if the meat wanted to leave the bone. One small bite, a few chews and the flavors soaked into every corner of my mouth. A bite with the potato another with the pepper; each one was an exciting journey. Even the cartilage was soft enough to eat. Another wonderful piece of focaccia and all I left when the waitress cleared were two very clean bones.

My course did not include a dessert but I wanted to try his Soy Panna cotta. When I was a child I had the thrill of exploring Italy for two months and had eaten real panna cotta. Real panna cotta is made by mixing full cream, sugar, milk with gelatin and letting it sit till cool. Soy milk usually has an after taste and does not thicken well. But Mr. Kubota knows his dietary sciences. It was a creamy creation delicately decorated with a carmel and liquor sauce. Each spoonful was a sweet escape and when I got to the bottom I was pleasantly surprised by a cooked piece of Japanese pear. The sweet panna cotta, the liquor laced carmel and the pear orchestrated pure joy in my pallet, a smile on my face and small giggle of pleasure.

To complete my meal was an almost perfect cup of espresso. No need for cream nor sugar it was of the best beans and brewed to the standards of Milan.

For all this I paid ¥1700 and walked away completely satisfied.

Il Fiore is not famous. The chef does not have a cookbook. But according to my Italian mother, Mr Kubota prepares some of the best Italian food she has ever eaten in her life. 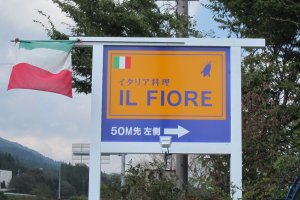 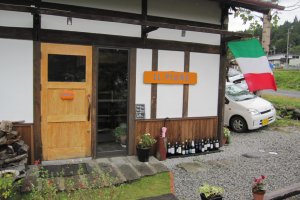 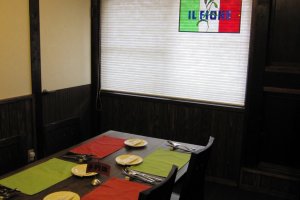 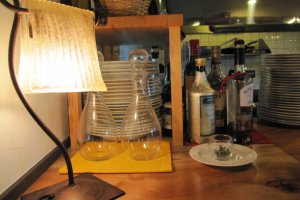 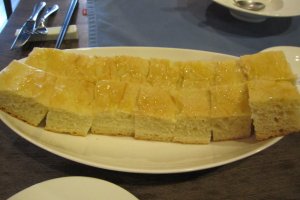 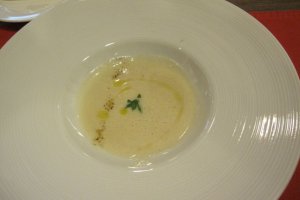